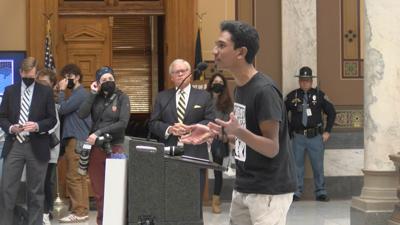 "We can do better than what we're doing, and this is the generation that can make a difference," said Republican State Sen. Ron Alting.

"We want that research to be on the record and for our state legislators to acknowledge this crisis and it's implications on the state of Indiana," said West Lafayette Jr./Sr. High School student Rahul Durai.

That's why they held a rally at this Indiana Statehouse Tuesday.

Durai was one of the event organizers. He's part of a statewide movement called "Confront the Climate Crisis.

"We hosted this event to have a presence here at the Statehouse to show our lawmakers that we are here. That the youth of Indiana care about climate action," Durai said.

The rally centered around support for two pieces of legislation sponsored by Senator Alting.

One is a resolution to acknowledge the problem of climate change, and the other would create a Climate and Environmental Justice Task Force.

Alting said he proposed the legislation because of what he's seen happen to the environment during his life.

"We've got problems with our rivers and our oceans and the air that we breathe and the water that we drink," Alting explained. "I'm not an extremist on that, but I just know that the environment has changed."

"It's urgent and time is running out, and frankly our state government has not acted," he said. "So, it's time for us youth to step up. We are pushing for this action, and we need to step up because no one else has."

Alting said the students asked for an amendment for the Climate and Environmental Justice Task Force bill.

They would like for a summer study committee to take a look at the legislation.

No. 3 Purdue rolls Butler in final edition of Crossroads Classic 77-48

Protecting yourself from the West NIle virus

August 26, 6:30 AM Weather Forecast Update – A hot weekend ahead with storms early next week