'There's no doubt': Top US infectious disease doctor says Wuhan coronavirus can spread even when people have no symptoms 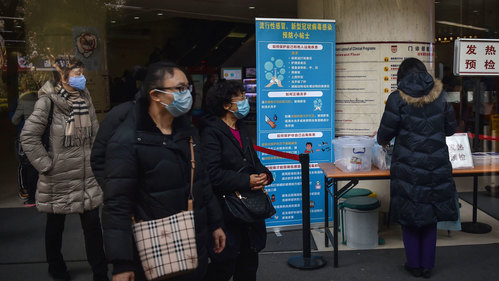 German researchers found that the virus was transmitted by people without symptoms in five instances in one cluster of people: from a parent to a daughter; from that daughter to two colleagues; and from one of those colleagues to two other coworkers.

'There's no doubt after reading this paper that asymptomatic transmission is occurring,' said Dr. Anthony Fauci, director of the National Institute for Allergy and Infectious Diseases. 'This study lays the question to rest.'

For nearly a week, US health officials have debated whether someone can spread the virus during the incubation period, when they are infected but not yet ill. The Chinese minister of health said it could spread asymptomatically, but US authorities had their doubts because Chinese health authorities offered no evidence.

The question is crucial, because when asymptomatic transmission occurs, officials sometimes need to institute more dramatic control measures, such as tougher quarantines.

The Wuhan coronavirus, which was first identified in China in December, has killed more than 200 people and infected nearly 10,000 in more than a dozen countries around the world.

In the study, which published Thursday in the New England Journal of Medicine, German researchers described four business associates who became infected through asymptomatic transmission.

'They were in workshops together, they went to the company canteen together,' Dr. Camilla Rothe, an infectious disease specialist and the lead author of the paper, told CNN.

The chain of transmission

The chain of transmission started on January 16 when a woman in Shanghai hosted her parents for a weekend visit, Rothe said.

Her parents were visiting from Wuhan, the epicenter of the coronavirus outbreak. They were healthy during their visit with their daughter but were later diagnosed as having the coronavirus.

Three days later, on January 19, the woman left Shanghai and flew to Germany. On Monday, Tuesday and Wednesday she held a series of workshops with employees of an auto parts supply company outside of Munich. She was healthy during those workshops, showing no signs of the disease, according to the New England Journal report.

On January 22, the woman flew back to China and became ill on the plane.

She was diagnosed with the virus and alerted the company -- but by then it was too late.

On January 24, two days after the Shanghai woman flew back home, two of the German employees who had attended her workshops fell ill, according to the report.

Neither of them was very sick, Rothe said.

The first, an otherwise healthy 33-year-old, developed a fever of 102.4 degrees, and felt ill for a few days.

'He stayed in bed for the weekend, but by Monday he felt fine,' Rothe said.

The second one had a 'mildly sore throat and a minimal cough,' Rothe said. 'He was clinically unspectacular.'

Then on January 26, nearly a week after the Shanghai woman infected these two men at the workshops, two more employees became ill.

These employees had not attended the workshops. But they had spent time with the first German patient before he was showing any symptoms.

Those two patients were also mildly ill with a minor sore throat and cough.

All four of these employees later tested positive for the Wuhan coronavirus. They stayed at a hospital not because they were sick, but to contain the spread of the virus.

Webasto, a German auto supply company, posted a press release on its website about the infections.

The company temporarily closed down its facility in Stockdorf, Germany, and cancelled business travel to China for at least the next two weeks.

The German study marks the first time scientific evidence available to the public has shown that the Wuhan coronavirus can be spread before someone develops systems.

On Sunday, Chinese Health Minister Ma Xiaowei said at a press briefing that they had found people could spread the virus while asymptomatic. Two days later, a Chinese doctor repeated this at a press conference.

US officials, however, weren't so sure, since the Chinese offered no data to support the claims.

On Wednesday, when a reporter at a press conference asked about the Chinese officials' statements, a doctor from the US Centers for Disease Control and Prevention expressed doubt.

'We don't know that. We've heard one Chinese health official say that, but we don't know that that's the case,' said Dr. Christopher Braden, deputy director of the National Center for Emerging and Zoonotic Infectious Diseases.

On Thursday, Dr. Nancy Messonnier, the director of the Center for the National Center for Immunization and Respiratory Diseases at CDC, acknowledged the test for this coronavirus might show up negative if someone is infected but not yet showing symptoms.

'Is it possible to detect this virus before somebody is symptomatic? And the answer is, we don't know yet and we're looking closely to see if we can,' she said.

Fauci, the NIH doctor, said it might take a period of time after infection for the test to be reliable.

'There's still much we don't know about this virus,' he said.

Novel coronavirus is a US public health emergency

Alex Azar, secretary of the US Department of Health and Human Services, declared on Friday that the novel coronavirus is now a public health emergency in the United States.

The ban will go into effect at 5 p.m. ET Sunday on Sunday.

'While this virus poses a serious public health threat, the risk to the American public remains low at this time, and we are working to keep this risk low,' Azar said in a statement. 'We are committed to protecting the health and safety of all Americans, and this public health emergency declaration is the latest in the series of steps the Trump Administration has taken to protect our country.'

Also on Friday, the CDC ordered a mandatory 14-day quarantine for nearly 200 Americans who recently returned from Wuhan. This is the first such order by the CDC in more than 50 years.

The 195 Americans, many of them diplomats and their families, flew from Wuhan to California on Wednesday. They had been staying at March Air Reserve Base since then under a three-day voluntary quarantine.

'We believe that this approach of having quarantine for the incubation period offers the greatest level of protection for the American public,' Dr. Martin Cetron, director of CDC's Division of Global Migration and Quarantine, said during a Friday telebriefing with reporters. 'That is our primary concern.'

CDC officials thanked quarantined individuals for their flexibility. Cetron said most of the passengers were 'exuberant and elated to be out of harm's way,' and understand the need for a longer quarantined.

'We're taking every measure possible to make sure people are treated with dignity and respect,' Cetron said.

One quarantined individual had previously tried to leave the base. CDC officials declined to offer more information about that person.