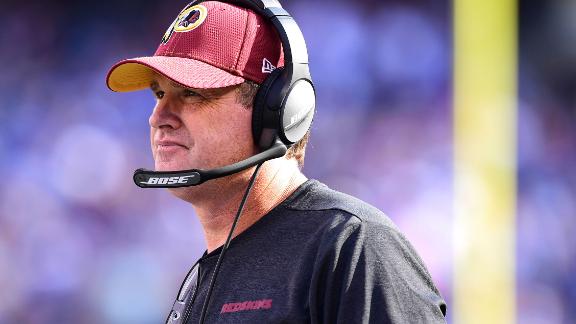 Jay Gruden is out as head coach of the Washington Redskins. He was fired after the team's 0-5 start to the season.

Jay Gruden is out as head coach of the Washington Redskins.

Gruden was fired Monday, according to NFL.com, after the team's 0-5 start to the season.

'Through the first five games of the 2019 season, the team has clearly not performed up to expectations, and we all share in that responsibility,' according to a statement Monday from the Redskins. 'Moving forward we are committed to doing all that we can collectively as an organization to turn things around and give our Redskins fans and alumni a team they can be proud of in 2019 and beyond.'

CNN has reached out to the team for comment and is waiting to hear back.

The Redskins were smacked by the New England Patriots -- the current Super Bowl champion -- 33-7 on Sunday.

After the loss, reporters asked Gruden about his job security.

'If the key works Monday, I'll keep working,' he told them.

Gruden was in the middle of his sixth season coaching the team and had compiled a 35-49-1 record, according to Bleacher Report.