The Fed cut rates for the second time this year 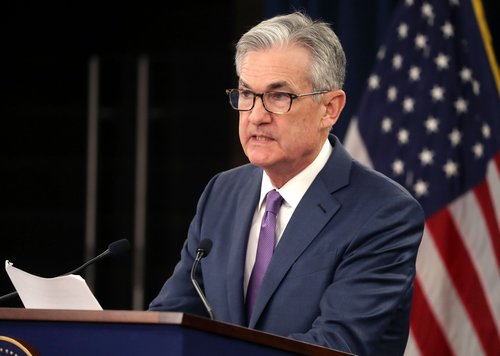 The Federal Reserve on Wednesday cut interest rates by a quarter percentage point for the second time since July, as concerns grow about a potential global s...

The Federal Reserve on Wednesday cut interest rates by a quarter percentage point for the second time since July, as concerns grow about a potential global slowdown.

Officials also left the door open for another rate cut this year if the economy weakens further, reinforcing the message by Fed Chairman Jerome Powell that policymakers will do whatever is necessary to prevent a recession.

'We took this step to keep the economy strong,' said Powell during a press conference with reporters.

The federal funds rate, which controls the cost of mortgages, credit cards and other borrowing, will now hover between 1.75% and 2%.

There was discord over the decision, with three officials dissenting. Two — Boston Fed President Eric Rosengren and Kansas City Fed President Esther George — have both voiced concerns that the US economy isn't in need of an extra boost from rate cuts. But St. Louis Fed President James Bullard favored a deeper, half-point cut.

Investors, hoping for a deeper cut, sold off stocks. The Dow fell more than 150 points following the Fed's announcement.

President Donald Trump, who has broken with presidential precedent and publicly pressured the Fed for months over rates, immediately weighed in with a bad review.

Policymakers have been sharply divided over whether to hold or continue to gradually reduce rates as the US economy presents a mixed picture. US consumers have continued to make big purchases as they enjoy a 50-year low in unemployment and an uptick in wages, but unresolved trade negotiations between the United States and China have dampened business investment and slowed the manufacturing sector.

In his remarks at a press conference Wednesday, Powell said the Fed expects the economy to remain strong and inflation to remain around its 2% target. He suggested another small cut or two could be warranted in the future. But he doesn't think the Fed needs to keep cutting for many more months.

'Generally Fed participants think these will be achieved with modest adjustments to the federal funds rate,' Powell said. 'If the economy does turn down, then a more extensive series of rate cuts could be appropriate. We don't see that. We don't expect that.'

He ruled out the possibility of negative rates, which Trump called for last week, which would match several foreign central banks in Europe.

With only two more meetings in 2019, seven of the 17 Fed officials now see the possibility of at least one more rate cut, potentially totaling three for the year. Five officials would prefer to halt any additional easing for the remainder of 2019, sending mixed signals of where exactly the Fed may go next.

When policymakers last projected their forecasts in June, officials were split on whether to continue to hold rates steady or to make two potential rate cuts in the second half. But worsening economic data from overseas and escalating tensions with China since that then has elevated fears about spillover onto the US economy.

Powell repeatedly raised the challenge of setting interest rates with a rapidly changing trade environment that has subdued business investment.

'It's an usual situation,' said Powell. 'It's a challenging time, I admit it.'

For now, Fed officials said they still forecast moderate economic growth and a strong labor market. They believe inflation will rise closer to their target, the level it considers healthy for the economy.

Policymakers now anticipate the US economy will grow slightly stronger than previously expected, at a 2.2% rate, and unemployment will hold steady at 3.7%, according to their updated economic projections. In June, the Fed forecast that economic growth for the year would stand at 2.1% with unemployment at 3.6%.

Powell on Wednesday said the New York Fed's decision to spend more than $125 billion in the overnight borrowing markets ensured crucial bank lending is running smoothly. He said he does not believe the market's cramping means there is contagion in the economy, and he thinks the Fed can solve the 'temporary' problems in the market.

'We were well aware of tax payments and settlement of large bond payments,' he said. 'The response to that was stronger than we expected. I'm not concerned about that.'

The Fed agreed to lower the rate banks pay on excess reserves to increase liquidity in other short-term lending markets.

'I doubt that anyone is closer to and has more invested in the behavior of these markets,' Powell said. 'We don't see this as having any implications for the broader outlook. But if we experience another episode, we have the tools to deal with it and we will use them.'