The new iPhone is betting almost everything on its camera. But will it be enough? 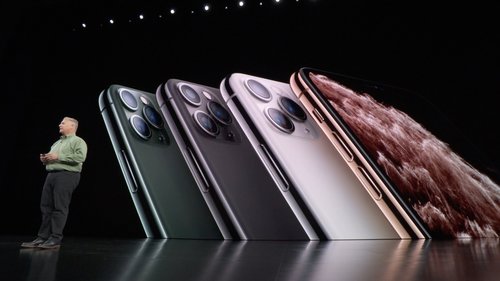 Smartphones are boring now. Every year they stay expensive and get minor upgrades.The new iPhones are no different. The biggest appea...

Smartphones are boring now. Every year they stay expensive and get minor upgrades.

The new iPhones are no different. The biggest appeal of the iPhone 11, 11 Pro and 11 Pro Max is the camera.

Apple is touting several quality-of-life improvements that the average person likely won't even notice: A new processor, a slightly upgraded screen, improved battery life and more scratch-resistant glass. The only standout is that the new iPhone 11 Pro and Pro Max have triple cameras for shooting photos at wider angles.

This week, social media lit up with memes over the triple cameras, between how they looked and how they were just another iteration of the iPhone we already know so well, with an additional camera crammed in.

Besides the camera, there's little reason to upgrade.

Phones look the same generation to generation, with the exception of foldable phones, which are still a work in progress.

You certainly won't get any attention for having the latest phone. An iPhone 8 looks so similar to an iPhone 11 nobody will be able to tell the difference at a glance.

What's more, when smartphone batteries get worn out, it's become a lot cheaper and easier to replace those batteries, rather than upgrading to a new phone.

As a reflection of consumer fatigue, smartphone sales have been on the decline. Apple sold just 38 million iPhones in the second quarter, a 13.8% decline compared to the year before, according to Gartner. Its first quarter was even weaker this year, selling 44.6 million phones, a 17.6% drop.

In its latest earnings call, Apple reported that the iPhone was no longer the majority of the company's revenue.

So it really needs this next iPhone to be a hit.

The newest flagship smartphones have great cameras and they have AI processing to make the photos better.

Apple lagged behind competitors who had gotten into the multi-camera business already, most notably Samsung. Apple is beginning to close the gap. The Samsung Galaxy S10 5G has six cameras: four in the back and two for selfies. The iPhone 11 Pro Max has four in total.

"With the iPhone 11 and 11 Pro series, Apple is attempting to catch up to where [competitors] have already been," said Vincent Thielke, a research analyst at Canalys.

The new iPhone 11 models get Night Mode, a camera feature that adjusts the lighting in dark scenes to make them more visible. The mode isn't available on older iPhones.

If you have a Samsung or Google flagship phone, you already get Night mode and Night Sight, respectively. But if you're an iPhone loyalist, this will be new.

There's also an upgrade to Portrait Mode that makes photos of dogs, cats and plates of food come out better, according to Apple.

But by the sum of its parts, the new iPhone 11 won't be a really meaningful upgrade for most consumers — in fact, you'll probably stop thinking consciously about your new phone a few weeks after you get it. It'll feel just like any other iPhone of the past couple years, which will be fine if you're just a fan.

Without serious discounts and promotions, it could be less fine for Apple, which is trying to grow its sales.

Person airlifted from crash near Rossville

TSC will pay all hourly workers through May 26th

Sewing group has made and donated more than 3,800 masks