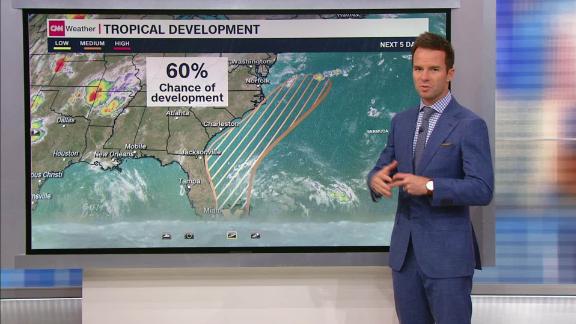 Autumn temperatures hit the Northeast, and a potential area of tropical development sits off the eastern coast. CNN Meteorologist Derek Van Dam has the weekend forecast.

Hop to it! A new study shows higher levels of physical activity at any intensity lowers the risk of early death in middle-age and older people.

Patrick Byrne, the CEO of online discount retailer Overstock, resigned yesterday after publishing a news release this week titled, "Comments on Deep State." In it, Byrne claimed he helped the FBI carry out "political espionage" and referred an undefined entity called the "Men in Black." Unsurprisingly, Overstock shares plummeted after the bizarre missive, but just because Byrne is out doesn't mean he's done talking. After his departure, the ex-CEO appeared on CNN and said the FBI directed him to pursue a "romantic relationship with Maria Butina" in the summer before the 2016 election. Butina is the Russian woman who has been accused of seeking to win influence in powerful Republican circles at the direction of her country's government. None of this has been verified, and former FBI Director James Comey told CNN the claims are "ridiculous."

The G7 summit convenes this weekend in France, and all eyes, as usual, will be on President Trump. Let's start with the good: Though the US economy is not as strong as it has been, it's still better off than most of the declining economies in Europe, so Trump is expected to do a little boasting about that. But recent divisive comments could cause some discomfort among the world leaders. The whole buying Greenland discussion and Denmark trip cancellation could sow some discord, as could Trump's outspoken support of Brexit. In fact, French President Emmanuel Macron has elected to forego the customary signing of an agreement by all the leaders at the end of the summit. Trump refused to sign the deal at the end of last year's summit in Canada and left the gathering early.

Federal prosecutors have charged 80 people, most of them Nigerian, in a web of scams that the US claims has robbed millions of dollars from businesses and elderly people. Seventeen so far have been arrested. Two of the men indicted allegedly ran a romance scam out of California. In this kind of scheme, scammers reach out to women online and start relationships via emails and messages. Those usually escalate to outrageous claims of hardship and requests for money. In one scam said to have been perpetrated by the men, a Japanese woman sent her online love interest -- really a scammer -- several payments to help him smuggle a bag of diamonds out of Syria. US prosecutors estimate the suspects together have bilked $6 million. All will face charges of conspiracy to commit fraud and to launder money, and aggravated identity theft. Some also will face fraud and money laundering charges.

This week marks the two-year anniversary of the campaign of violence started by Myanmar's military against the Rohingya people, an ethnic Muslim minority. In that time, hundreds of thousands of Rohingya people have been left effectively stateless and many have had to seek refuge in camps along the border with Bangladesh. The two countries yesterday were supposed to start repatriating about 3,450 of the Rohingya refugees, but there's a problem: Some of the refugees don't want to be repatriated for fear of further violence and oppression. International human rights organizations have expressed concern about the planned repatriation, saying the Rohingya people would be walking right back into the persecution that drove them out in the first place.

US travel to Canada is at its highest since 2007

We just love our northern neighbors (and readers!) so much!

Former US Rep. Mark Sanford calls Iowa 'the Buckeye state' ahead of a political visit

Apple advises people not to put its new credit card near denim, leather or loose change

Oh, the three things credit cards touch the most? Got it.

Proving that all the money and fame in the world can't convince a toddler to stand still.

"Our house is burning. Literally. The Amazon rainforest -- the lungs of our planet which produces 20% of our oxygen -- is on fire. It is an international crisis."

The average number of hours American commuters spent stuck in traffic in 2017, according to a new report. In some of the most congested areas of the country, that figure was more than double.

After a historic run, Lil Nas X's hit song, "Old Town Road," was knocked off the top spot on the Billboard Hot 100 chart this week by what song?

B. "Truth Hurts" by Lizzo

If I fits, I sits

It's Friday, and I think we all deserve a classic cat video. (Click here to view.)