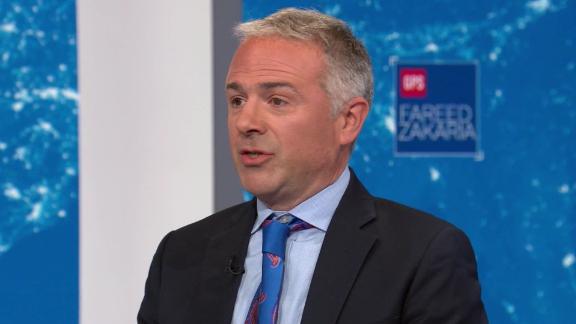 US Financial Times National Editor Ed Luce discusses with Fareed what Britain's political scene will look like in the next few months.

It's officially back-to-school time. But it's a tough time for the 5 million school children who don't have money for supplies. Here's how you can help them.

Authorities in three states say they stopped three potential mass shootings over the past few days. All three cases were brought to their attention thanks to tips from the public.

Even in a place like Kabul, long-accustomed to such violence, this weekend's suicide bomb attack on a wedding there was a shocker. At least 63 people were killed (and almost 200 injured) after someone detonated an explosive vest at a wedding hall. ISIS claimed responsibility for the attack. All this happens as the US tries to finalize a peace plan with the Taliban that could end America's 18-year-war there. On Sunday President Trump said he didn't want Afghanistan to become a "laboratory for terror."

Another weekend, another massive protest in Hong Kong. Hundreds of thousands of people marched through Hong Kong's streets yesterday in the 11th straight weekend of mass anti-government demonstrations. The protest movement has been tested as of late by police bans and threats from the Chinese government. It rained during the marches, so much of the city center turned into a sea of slow moving umbrellas. The protests, which began in June over a now-shelved extradition bill, has since expanded to include calls for greater democracy and government accountability.

The dreaded no-deal Brexit is staring the UK right in the face -- and a government report leaked to a newspaper predicts it will be as disastrous as everyone fears. The report, printed in The Sunday Times, says the UK will face food, fuel and medicine shortages if it leaves the European Union without a trade deal. It added that the public and businesses were unprepared for a no-deal Brexit. A British official responsible for planning for a no-deal Brexit said the report represents the "worst-case scenario." The UK is due to leave the EU on October 31.

It's been a hot summer in Alaska. So hot that it's killing large numbers of salmon. One scientist told CNN that she and a group of colleagues on an expedition along the Koyukuk River counted 850 dead salmon, although they estimated the total was likely four to 10 times larger. None of the fish showed signs of lesions, parasites and infections, so the scientists concluded the die-off is connected with the heat wave.

People are talking about these. Read up. Join in.

If you want to roll through the streets of San Francisco like Steve McQueen, now's your chance. The 1968 Ford Mustang GT he drove in "Bullitt" is going up for auction.

He grew his hair out for 15 years. But he cut it all off so he could enlist in the Army and serve his country.

Want to visit the world's tallest unoccupied building? You'll need to go to North Korea to look inside the Ryugyong Hotel.

Alligators swimming across roads and climbing fences? Maybe humanity should just leave the Sunshine State to those bad boys.

If you happen to be in Cape Town, South Africa you can check out the pop-up restaurant that focuses on insect cuisine. Yeah, you read that right.

The "Stand Your Ground" manslaughter trial, in a case involving a shooting that happened after a dispute over a handicap parking spot, starts today in Florida.

NUMBER OF THE DAY

The number of hearses used to deliver thousands of flower arrangements to the makeshift memorial at the El Paso Walmart. Twenty-two people were killed there in a mass shooting earlier this month.

QUOTE OF THE DAY

Meet the Brazilian artist who makes monuments that melt away. (Click to view)