Ford and Volkswagen team up on self-driving and electric cars 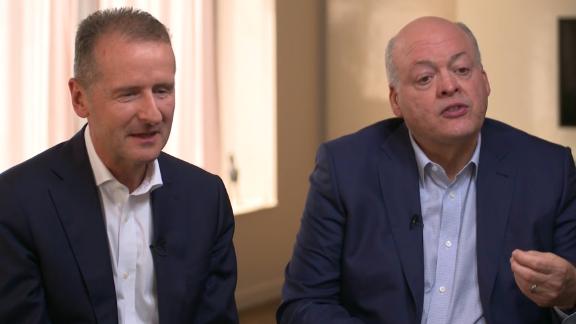 Ford CEO Jim Hackett and Volkswagen CEO Herbert Diess sat down with CNN's Julia Chatterly to discuss the growing alliance between the two automakers to develop electric and self-driving vehicles.

Volkswagen and Ford announced plans Friday to work closely to develop electric- and self-driving vehicles, the latest automakers to partner in the face of massive changes rocking the auto industry.

Ford CEO Jim Hackett and Volkswagen CEO Herbert Diess appeared together on Wall Street Friday, building on a growing alliance between the two automakers first announced a year ago.

With this latest investment, Volkswagen has agreed to join Ford in investing in Argo AI, the autonomous vehicle platform company now valued at $7 billion. The two automakers said they will own a majority of Argo AI. The company is working on developing self-driving technology for ride sharing and goods delivery services in dense urban areas.

Ford said it will become the first additional automaker to use Volkswagen's electric vehicle architecture to build electric vehicles for the European market starting in 2023.

'We stand at the precipice of biggest shift in transportation since [the one] Henry Ford initiated over 116 years ago,' said Hackett speaking to analysts and media. 'Our industry and the world is being upended by technology and innovation.'

Traditional automakers are worried they could be left behind by changes in the market brought about by tougher environmental regulations in Europe and elsewhere, as well as new players such as Uber and Tesla and potentially deep-pocketed tech companies such as Google parent Alphabet and Amazon.

Ford does not currently sell any pure-electric vehicles. It is working to develop its own electric vehicles and has invested $500 million in electric truck maker Rivian to jointly develop an electric pickup. Those efforts will go forward even with this latest agreement.

Volkswagen, still trying to overcome damage to its reputation from the diesel emissions cheating scandal, has announced ambitious electric vehicle goals: It pledged to make 40% of its fleet electric by 2030 and to be CO2 neutral by 2050.

Despite promising electrification and self-driving cars, it could be years before the market will embrace what the industry is now spending billions of dollars to develop. Hackett told CNN that it was a 'roll of the dice' for when self-driving car technology would be ready for widespread use and acceptance.

'I'm am certain this will change the world. The question is when,' he said in an interview with Julia Chatterley.

But he said despite that uncertainty and massive costs, automakers 'can't sit on the sidelines and wait for it to happen.'

That's why cost-sharing arrangements such as this one are necessary.

'These [joint efforts] are really smart ways ... to make sure the companies are evolving and not taking too much risk,' Hackett told investors at the public session.

The alliance between the automakers had produced only modest agreements until now. In January, they said they would develop commercial vans and medium-sized pickups beginning as early as 2022. But they said at the time they were investigating how to develop the next generation of vehicles, such as electric and self-driving cars.

'Both companies are very complementary,' he said. 'We are very strong in Europe, also in China. We are very weak here in the United States. It's very useful for both companies to combine some of their resources and make both companies stronger. We think Ford makes lots of sense for us.'

Hackett suggested the two companies could work together in other areas beyond Friday's announcement. But Diess ruled out any steps toward joint ownership between the two companies in the future. Ford's voting stock is still controlled by the Ford family while Volkswagen has about 20% of its shares owned by the German state of Lower Saxony, where it is based.

'I don't think we need any ... stake holding in each other,' he said. 'This works on mutual benefit.'

The companies, two of the world's major automakers, are racing to develop electric- and self-driving cars on their own while at the same time penning deals with rivals to help defray the cost of high-tech R&D.

The alliance follows a similar tie-up between German carmakers BMW and Daimler, which formed a joint venture that will develop driverless technology. Honda, for its part, has invested in General Motors' self-driving car unit.

Fiat Chrysler and Renault recently held unsuccessful merger talks motivated by this same desire to share costs. Renault is already a part of an alliance with Nissan and Mitsubishi.