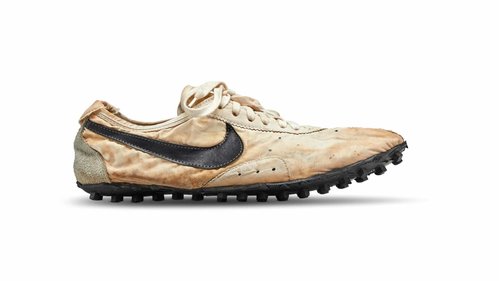 Clear out your shoe racks (if you've got a few thousand dollars to spare): New York auction house...

Clear out your shoe racks (if you've got a few thousand dollars to spare): New York auction house Sotheby's has announced a sale of 100 of the world's rarest sneakers, including a handmade 1972 pair expected to sell for up to $160,000.

The pair of Nike "Moon Shoe," waffle-soled running shoes designed by Nike's co-founder Bill Bowerman for the 1972 Olympic Trials, is one of only 12 ever made, and the only known unworn pair. As yet, there are no bids on the sneakers, which have a starting price of $80,000.

Also up for sale in the online auction, launched in partnership with sneakers and streetwear marketplace Stadium Goods, are two pairs of "Back to the Future Part II"-inspired shoes, released in 2011 and 2016 to raise money for the Michael J. Fox Foundation for Parkinson's Research. Both models light up, but here's the kicker: The 2016 pair is self-lacing.

Bidding on the sneakers opened Thursday, and will continue through July 23. Noah Wunsch, head of e-commerce at Sotheby's, said in a press release that "the sale offers a range of rare, highly-coveted collectible sneakers bringing together art, culture and fashion."

According to a May 2019 report from fashion site Farfetch, which used data from Stadium Goods, the most valuable sneakers currently on the resale market are a high-top model designed by Kanye West for Louis Vuitton. Farfetch lists their original 2009 price as £865 (about $1,085 at current exchange rates). 10 years later? They're worth about $29,000.

Must-watch videos of the week