A 12-year-old boy who was starved, chained and kept in a dog collar died. His mother never knew he left the state 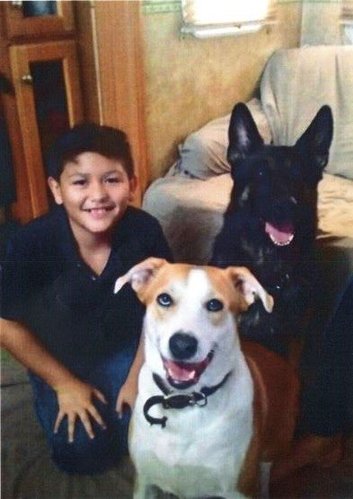 Eduardo Posso was supposed to be living in Florida with his sister, father and stepmother and attending school.Instead, the 12-year-old was pronounced...

Eduardo Posso was supposed to be living in Florida with his sister, father and stepmother and attending school.

Instead, the 12-year-old was pronounced dead at an Indiana hospital on May 24, showing signs of prolonged abuse, neglect and starvation, court records show.

His father, Luis Posso, 32, and stepmother, Dayana Medina-Flores, 25, have been arrested and charged with murder, negligence, criminal confinement and battery to a minor. Officials say the couple slowly starved Eduardo to death in a Bloomington, Indiana, motel.

Both Posso and Medina-Flores are being held in the Monroe County Correction Center on a $500,000 bond each, County Sheriff Bradley Swain said in a press conference last week.

CNN reached out to their public defender for further comment.

The mother said she didn't know where her kids were

Eduardo's mother, Aurea Garcia, told CNN she didn't know her son had even left the state of Florida when police showed up at her door last week.

Garcia says she initially thought that the police were there to speak with her about getting her kids back from their father, who she says was abusive toward Eduardo.

'I thought my son finally spoke out and someone will know and they will help him,' Garcia said.

But the officers were there to tell her about her son's death.

'When he told me that I just went crazy. I started screaming. My husband was holding me down,' Garcia said.

The boy had been chained in a bathroom, affidavit says

Eduardo's death has been classified as a homicide by a forensic pathologist. The cause was complications from starvation and malnourishment with the absence of medical care.

Hospital staff noted that Eduardo was severely emaciated and had bruising, lacerations, and ulcers all over his body, according to court records.

In the last weeks of his life, Eduardo had been confined to a motel bathroom, chained to a bathtub towel bar with a shock collar around his neck, according to a probable cause affidavit.

His family was living in a motel in Kokomo, Indiana while Posso and Medina-Flores worked for a traveling circus handing out advertisements, a probable cause affidavit said.

The affidavit says that during an interview Medina-Flores told investigators the family moved out of Florida following 'repeated involvements' with the Florida Department of Child Services.

The stepmother said that on May 23 Eduardo got sick and was too weak to feed himself before he became incoherent, according to the affidavit. The next morning, she says she found him cold to the touch and his father took him to IU Health Bloomington Hospital.

The boy was unconscious when he arrived at the hospital and was pronounced dead shortly after.

Three other children, a 9-year-old girl, a 5-year-old boy, and a 2-year-old boy have been placed in the care of Child Protective Services and appear to be healthy, Swain said in a press release.

The probable cause affidavit for Posso and Medina-Flores says after Eduardo's death investigators discovered a video on the stepmother's cell phone that showed Eduardo laying in the bathtub restrained. The video shows Medina-Flores and another child enter the bathroom and ignore Eduardo.

After Eduardo's death, investigators also found chains, cords, restraint cuffs, an electric shock dog collar, and padlocks under the box springs of one of the two beds in the motel room. They also found a text in Spanish on Posso's phone that said, 'Eduardo was almost out of the chains.' A selfie of Posso with Eduardo restrained in the bathtub was also found, according to a press release.

Medina-Flores admitted to investigators that Eduardo had been beaten by her husband with a belt, a shoe and his hands and that he had restrained Eduardo with cords and chains more than ten times, according to the affidavit. She made the admissions after first denying that she knew about the abuse, the affidavit says.

The father had also used the electronic dog collar to shock Eduardo, Medina-Flores said, according to the affidavit. She told investigators that when they didn't bring Eduardo out with them to hand out advertisements, they kept him in the bathroom and monitored him via video.

Posso confirmed his wife's claims that he had spanked his son with a belt when interviewed but denied withholding food from him and didn't give a reason for several of Eduardo's other injuries, according to the affidavit.

Garcia said she knew her ex-husband was rough with her kids, it was part of the reason they split. But she didn't think he was capable of what he's been accused of. 'It never crossed my mind that he was going to do something horrible that he did. How can you do that to your son? You don't do that, starve him to death, chain him up, beat him. How can you think anyone would do that especially to his own blood?'

She says her son was a sweet kid, who often stood up for his 9-year-old sister. The last time she saw him was Thanksgiving of 2017. 'That week my son spoke a little bit ... he was afraid of talking.'

Garcia said her son looked skinny but he told her it was because he was eating cereal for dinner after his school raised concerns about his weight.

She and Eduardo's father separated in 2015 and divorced in 2016, she said. After the divorce, Garcia says that during the separation Posso picked up the kids and never returned them. She says she missed a custody hearing and he was awarded full custody.

Garcia thought they were still in Florida because she had seen Posso at court in Florida twice since their divorce and was paying child support to an address in Florida.

Garcia hopes that the death of her son will inspire others to speak out if they see child abuse.

'If you see a child no matter where, if you don't know them, if you see they're being mistreated talk,' she said. Don't be afraid you could be saving a kid from the hands that are hurting them.'