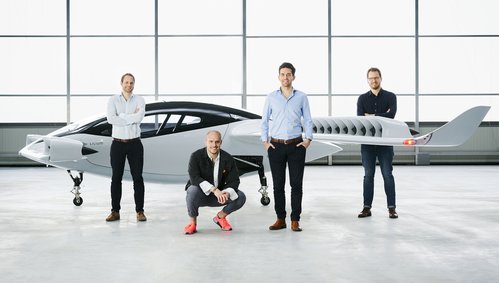 A flying taxi that you can order through an app? This German company plans to make that a reality in the next six years.Munich-based startup Lilium un...

A flying taxi that you can order through an app? This German company plans to make that a reality in the next six years.

Munich-based startup Lilium unveiled its five-seater electric air taxi prototype on Thursday. The Lilium Jet, which conducted its first flight earlier this month, is part of an app-based flying taxi service that the company expects will be 'fully-operational in various cities around the world by 2025.'

The battery-powered jet is capable of traveling 300 kilometers (186 miles) in 60 minutes on a single charge, and will connect cities through a network of landing pads. Commuters will be able to book rides from their nearest landing pad through a smartphone app.

Lilium did not reveal how much its service will cost, but claims that it will be 'comparable in price' with regular taxis. Remo Gerber, the company's chief commercial officer, told CNN Business that it is aimed at ordinary people and not just well-heeled business travelers.

'Today we are taking another huge step towards making urban air mobility a reality,' Lilium co-founder and CEO Daniel Wiegand said in a statement. 'We dream of a world where anyone can fly wherever they want, whenever they want.'

In making that dream a reality, the German company will find itself up against some of the biggest names in the business — including the world's top ride hailing firm. Uber is partnering with NASA with the goal of launching a flying taxi network by 2023.

Other big names that are working on flying cars include Boeing and Rolls Royce.

Lilium, founded in 2015, claims its aircraft is capable of making 'much longer journeys than the majority of its competitors.'