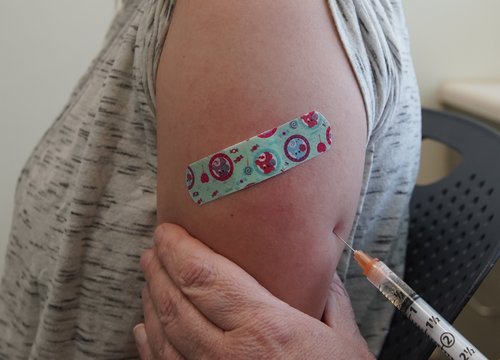 Instagram said Thursday it will now block additional hashtags that surface vaccine misinformation, but other hashtags and content promoted by anti-vaccination accounts are still thriving on the platform.

The change in Instagram's policies comes after a CNN Business report on Wednesday which revealed that, though Instagram had announced it was blocking hashtags like #VaccinescauseAIDS, the hashtag #VaccinesKill was still up on the app and appeared as a top result in a search for "vaccines" after anti-vax accounts. The majority of the top posts under the hashtag were misinformation.

#VaccinesKill is now a blocked hashtag. If a hashtag is blocked on Instagram, it will no longer populate with any results when users click on it. Users clicking on #VaccinesKill are greeted by a note that says, "Posts for #vaccineskill have been limited because the community has reported some content that may not meet Instagram's community guidelines."

Despite the new policy, a new review by CNN Business on Thursday found that hashtags such as #VaccinesHarm are still alive and well on the platform and showing a significant amount of anti-vax content and vaccine misinformation in their top results. The top posts surfaced by Instagram's algorithms for the neutral hashtag #Vaccines were also polluted by anti-vaccine misinformation.

Asked by CNN Business why #VaccinesHarm is not blocked under its new policies, an Instagram spokesperson said the company is currently reviewing hashtags and will block ones that feature a certain amount of vaccine misinformation.

Instagram also said Thursday that now when it blocks a hashtag with a certain term, it will also block that term from being searched entirely. For example, Instagram said, if a user were to type "vaccinescauseautism" into Instagram's search, no results would appear because #VaccinesCauseAutism is a blocked hashtag. When CNN Business performed that search on several phones, however, results did appear, including hashtags like #vaccinescauseautismreadthestudies.

Hashtags that have a smaller percentage of health-related misinformation will only show a limited number of posts, the spokesperson said.

The spokesperson would not elaborate on how much misinformation has to appear under a given hashtag for it to be banned, saying the company didn't want users to be able to game the system.

"Vaccines are extremely safe. Serious adverse reactions are very, very rare. It's very unfortunate that there would be such a hashtag because it's going to scare people," Daniel Salmon, a professor at the Johns Hopkins Bloomberg School of Public Health and director of the Institute for Vaccine Safety, told CNN Business Wednesday. "If you scare people, less people will get vaccinated and you'll have outbreaks of things like measles which can kill children."

Scientists have repeatedly and consistently debunked the most common anti-vax myth, the idea that there is a connection between vaccinations and the development of autism in children. Reputable organizations like the American Medical Association and the American Academy of Pediatrics say that vaccination for children is crucial to public health.

Experts are concerned that anti-vax content and misinformation spreading online can discourage people from getting vaccinated or leave them vulnerable to contracting potentially deadly diseases such as measles. The number of measles cases reported this year in the United States had climbed to 764 as of Monday, according to the US Centers for Disease Control and Prevention.

Facebook, which owns Instagram, first said two months ago it was working to address vaccine misinformation on its platforms, including not showing or recommending misinformation about vaccinations on Instagram's Explore page or hashtag pages.