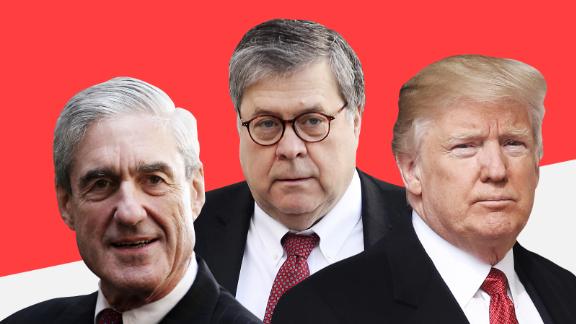 Attorney General William Barr held a press conference to discuss the release of the Mueller report. Barr's conclusions differed from the report in key areas.

In the hours after receiving the long-awaited report from special counsel Robert Mueller, some Democrats on Capitol Hill called not to impeach the President but for the removal of Attorney General William Barr.

The attacks against the head of the Justice Department underscored the Democratic Party's reluctance to opening up politically divisive proceedings to charge the President with crimes, as well as their disgust with Barr's handling of the special counsel investigation.

After Barr gave them the redacted report on Thursday, most Democrats were less likely to focus on Barr's conclusion that Mueller did not find that the Trump campaign coordinated with the Russian government in interfering in the 2016 presidential campaign.

Instead, they zeroed-in on the episodes Mueller examined concerning the President and his potential obstruction of justice -- and Barr's determination that there is not enough evidence to establish that the President committed such an offense, even though the special counsel did not exonerate the President on that question.

One of the decisions Mueller evaluated was when Trump attempted to fire him in 2017, but withdrew the request when then-White House counsel Don McGahn refused to do it.

"The President's efforts to influence the investigation were mostly unsuccessful, but that is largely because the persons who surrounded the President declined to carry out orders or accede to his requests," said the special counsel report.

One after the other, senators running for president -- including Elizabeth Warren, Kamala Harris and Cory Booker -- all said on Thursday that Barr acted not as attorney general of the United States but like the President's defense lawyer.

"Barr's actions have made it impossible for the American people to have faith that the Justice Department's handling of this process was anything but partisan," Harris said.

Some congressmen were even harsher in their critiques. Reps. Jim McGovern, the House Rules Committee chairman, Barbara Lee, a member of the House Democratic leadership team, and Eric Swalwell, who's also running for president, called for Barr to quit.

"Attorney General Barr has lost the trust and confidence of the American people and he should resign," McGovern said.

During his nomination hearing this year, Barr -- President George H.W. Bush's attorney general -- was treated by Democrats with greater deference than his predecessor Jeff Sessions.

"No one can say he isn't qualified," said Sen. Dianne Feinstein of California, the top Democrat on the Judiciary Committee, at the time.

But many Democrats believed even then that Barr would mishandle the special counsel's investigation, pointing out that he had written that Mueller's obstruction of justice inquiry was flawed.

"Bill Barr may be a fine lawyer and a former attorney general, but the situation in which we find ourselves -- and the manner in which Mr. Barr has chosen to interpret the law -- leaves too many questions about whether he can be an impartial attorney general," Feinstein said earlier this year.

Democrats' doubts about Barr deepened when he was confirmed to his post. In March, he released a memo summarizing Mueller's report and made his determination on the obstruction of justice question.

Barr then said in a congressional hearing that "spying did occur" against the 2016 Trump campaign, a claim that Trump's reelection team then used to inaccurately assert that the attorney general had said he believed the Obama administration had illegally surveilled Trump.

By Thursday, many Democrats were fed up with Barr. After they heard that the attorney general would hold a news conference hours before releasing the redacted report to Congress and the public, House Speaker Nancy Pelosi and Senate Democratic Leader Chuck Schumer called for Mueller to testify before Congress, saying that Barr's actions "resulted in a crisis of confidence in his independence and impartiality."

"Attorney General Barr presented a conclusion that the president did not obstruct justice but Special Counsel Mueller's report cites several instances of presidential action that appear to undercut that finding," they said in a joint statement.

But they stopped short of calling for opening an impeachment inquiry. Ever since Democrats won the House majority in the 2018 midterms, congressional Democratic leaders have tamped down talk of impeachment and dismissed speculation that Democrats might move toward charging the President with offenses, even as Democrats opened a number of wide-ranging investigations into the Trump administration.

Indeed, in the aftermath of the release of the Mueller report, House Democrats directed their investigations to examine areas they believe were not fully explored by the special counsel.

The Democrats plan to press for the entire Mueller report and the underlying evidence, with the House Judiciary Committee preparing to issue subpoenas as soon as Friday.

The committee has also authorized subpoenas for several White House officials who were mentioned in the Mueller report -- including McGahn -- that could shed light on allegations of obstruction of justice. The House Judiciary Committee wants to hear from individuals who had "incriminating evidence" laid out in the report, according to a Democratic source.

In an interview with CNN, House Majority Leader Steny Hoyer said there is nothing he has seen so far in the Mueller report that would change the House leadership strategy to avoid impeachment proceedings.

"Based on what we have seen to date, going forward on impeachment is not worthwhile at this point," said Hoyer. "There is an election in 18 months and the American people will make a judgment."

When asked if the Mueller report would provide a "road map" should Democrats open impeachment proceedings, House Judiciary committee Jerry Nadler said it was "too early" to discuss that, but then said the special counsel "probably" wrote the report with that "intent." Barr's redactions, he said, seemed to "frustrate that intent."

For months, rank-and-file Democrats talked around impeachment, saying they first needed to see the Mueller report. Now, they need to decide whether they will join a small group of far-left members of Congress in advocating for it.

Rep. Jamie Raskin, Democrat of Maryland, said he doesn't think Democrats are ready to start such an inquiry.

"Remember, impeachment is not just a judgment of law; it is a judgment of law and politics, which is why it is reposed in Congress and not in the courts," he said. "It's not as simple as just applying the law to the facts as you would on the LSATs. You have to make a political judgment about where it fits in terms of the broader public policy agenda."

Rep. Don Beyer, Democrat of Virginia, said he expects some Democrats to start talking about impeachment again after what he called the "devastating" Mueller report.

Beyer told CNN there was "clearly a persuasive pattern of obstruction of justice" in the report and argued Mueller repeatedly grew close to drawing that conclusion.

Beyer noted that Pelosi and other Democratic leaders have discouraged talk of impeachment, but added, "I think people are going to be certainly looking at that again."

Republicans said that the Mueller report proved Trump was right all along and that Democrats were misguided in choosing Barr as their latest target.

Following a speech in LaGrange, Kentucky, on Thursday, Senate Majority Leader Mitch McConnell told reporters that "it seems to me pretty clearly the Democratic playbook is to go after the attorney general" and "question his integrity."

McConnell then noted that Barr would have a chance to defend himself before a congressional hearing in May.

"The thought that Bill Barr -- at age 69, on his second tour as attorney general -- would do anything to tarnish his own image or reputation is completely ridiculous," McConnell said. "I look forward to seeing what the attorney general has to say."

Women are making their mark in business ownership in Tippecanoe County