Some Democrats want to completely overhaul the US government 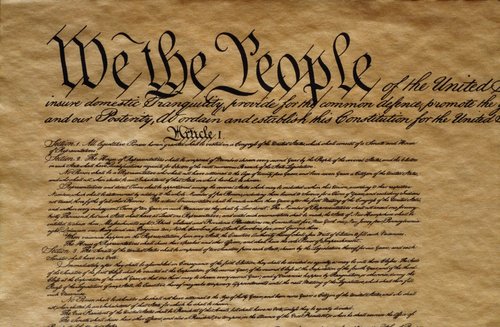 The list of big systemic changes that some Democratic presidential candidates are pushing is long and getting longer.It goes further than their massiv...

The list of big systemic changes that some Democratic presidential candidates are pushing is long and getting longer.

It goes further than their massive and ambitious proposals to improve the social safety net by remaking the health insurance system, testing jobs guarantees, doling out nest eggs to American children and responding to the existential threat of climate change.

Those are all concrete proposals focused on inequality in the US. But the latest ideas emerging in the 2020 campaign target the underpinnings of the US federal system of government itself.

President Donald Trump noted some of the proposals and called them "strange" on Twitter early Wednesday, taunting Democrats that they'll have to win at the ballot box first. He didn't mention that these ideas still have little or no chance of becoming reality in the near future.

Actually, how elections should be won is one of the overhauls that some Democrats support. Here's a look at that idea and several others:

Elizabeth Warren, a US senator from Massachusetts, already wanted to transform the US economic system by breaking up massive tech companies. At a CNN town hall on Monday night, she endorsed transforming the US electoral system by abandoning the Electoral College.

That's not exactly a controversial position. Most Americans, according to polls, think the president should be selected by popular vote. And Democrats have been complaining about the Electoral College since 2000, when Republican George W. Bush lost the popular vote but won the White House. When Trump did it again in 2016, it proved that the system devised as a compromise between Southern slave-owning states and Northern free states more than 200 years ago is causing tension between rural Southern states and frustrated urban-focused states today. Today's Republicans benefit and today's Democrats are tormented.

Trump, in a set of tweets on Tuesday, said the idea would completely change the way candidates campaign.

Democrats saw Republican leaders sit on a court vacancy during the Obama administration for more than a year in case a Republican won the White House. Trump did, and conservative Neil Gorsuch was appointed. Then swing vote Anthony Kennedy resigned and the balance of the court shifted toward the right when Brett Kavanaugh was confirmed last fall. The new swing vote seems to be Chief Justice John Roberts. Supporters of Roe v. Wade, the landmark decision that made abortion legal nationwide, now fear the court might re-examine the issue.

Expanding the court could dilute the importance of any single justice, especially now that a conservative majority could hold sway for a generation.

It's an idea not without precedent in US history. In fact, the Constitution leaves the sizes of US courts up to Congress and in the course of American history there have been as few as five Supreme Court justices and as many as 10, although it has been set at nine since after the Civil War when Ulysses S. Grant was President.

Franklin D. Roosevelt tried to combat the court's initial opposition to his New Deal programs by adding justices, although he never got support in Congress. The threat, however, coincided with a convenient shift in ideology by a few sitting members.

Trump probably wouldn't support expanding the court unless he could appoint new justices, but he would love for Congress to change the makeup of the US court system. He's talked in recent years about trying to break up the 9th US Circuit Court of Appeals, the nation's largest federal court regional circuit, which includes the entire West Coast.

One Republican, Rep. Mark Green of Tennessee, is proposing a constitutional amendment to permanently set the court's membership at nine.

Every Democrat running for president from the House or the Senate has endorsed statehood for Washington, DC. The Constitution expressly requires a capital district, but in modern times it has become a symbol of frustration for DC residents -- there are more of them than in Wyoming or Vermont -- that they have no voting power in Congress.

The bill most Democrats support in Congress would seek to avoid a constitutional amendment by shrinking the size of the capital to, essentially, the National Mall, the Capitol building and the White House. Most or all DC residents would then live in the newly formed state.

It's hard to imagine DC statehood happening in the current governmental system. Opponents would argue it takes a constitutional amendment, which requires supermajority votes in both chambers on Capitol Hill and ratification by most state legislatures. Since granting statehood to DC would essentially be adding two Democratic seats to the Senate and one voting member to the House, don't look for that amendment (or even the bill that tries to sidestep an amendment) to gain any Republican support anytime soon. There have been separate proposals -- much less popular among DC residents -- to fold Washington back into Maryland. That would give the residents some voice in Congress, though not statehood, and potentially avoid the need for a constitutional amendment.

There is also the question of statehood for Puerto Rico, which could likely bring two Democratic senators and voting members of the House. While the idea does not have as much steam as DC statehood, Puerto Rico has more than 3 million residents, whereas DC only has more than 700,000. And while DC residents got the right to vote in presidential elections thanks to the 23rd Amendment, Puerto Ricans can vote for President only if they move from Puerto Rico to a state.

Democrats are about to pass a plan to update the voting system. It does not include lowering the federal voting age, but at least one prominent Democrat, House Speaker Nancy Pelosi of California, likes the idea, although she made clear when she endorsed it recently that it's not the position of her caucus of Democrats in the House.

I myself personally -- I'm not speaking for my caucus -- I myself have always been for lowering the voting age to 16. I think it's really important to capture kids when they're in high school, when they're interested in all of this, when they're learning about the government, to be able to vote. That -- that is not necessary -- you know, in other words, some of the priorities in this bill are about transparency and openness and accessibility and the rest, that's a subject of debate. But my view is that I would welcome that.

Again, this would require a constitutional amendment, which likely is not happening anytime soon.

What about a constitutional convention?

And that's the larger theme of these ideas. Many of them require changing the Constitution. Of course, there is a second way to do that: by calling a new constitutional convention. No Democrat has recently done that, but Republicans like Sen. Marco Rubio of Florida and former Florida Gov. Jeb Bush have entertained the idea of a new constitutional convention in recent years, although their aim was to pursue a federal balanced budged amendment, impose term limits for federal lawmakers and restrict the commerce clause that gives the federal government so much power. So gripes with the Constitution are bipartisan.

Wouldn't it be something to see Republicans and Democrats come together and agree to meet and compromise in order to change it?

It bears mentioning that while these proposals wouldn't deal specifically with public concerns, people's general faith in the US government has been falling. Big time.

According to a Gallup poll this year, trust in government to handle domestic and international problems is under 50% -- its lowest in more than two decades. That measure is often tied to which party holds the presidency, but it is currently down among both parties.