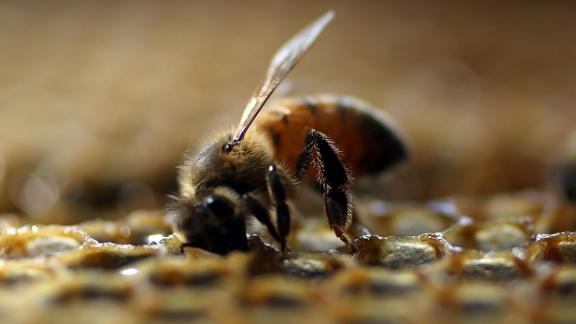 Does math give you trouble? Here's some encouragement: Despite their miniature brains, a new study says honeybees can learn basic arithmetic. If they can do it, so can you!

According to a study published this week in Science Advances, scientists at RMIT University in Melbourne, Australia, have shown that honeybees can add and subtract if trained to do so. This discovery helps scientists understand the relationship between brain size and brain power, perhaps knocking birdbrain off the list of perceived slights. Honeybees and humans are separated by more than 400 million years of evolution, so the study's authors say their findings suggest that an advanced understanding of numbers 'may be more accessible to nonhuman animals than previously suspected.'

Many animals understand numbers at a basic level for essential tasks. But until now, only a few animals have demonstrated the ability to add and subtract. Honeybees join this short list that includes chimpanzees, African grey parrots and spiders.

The revelation that the tiny brain of a honeybee can understand basic mathematical operations has ramifications for the future development of artificial Intelligence, according to RMIT.

'This could give us insight on how to build more simple computers that can still process at a higher level ... perhaps making computers more energy efficient,' said Scarlett R. Howard, the study's lead author.

How to train your bee

Training bees to do your homework won't be an option, but here's how the scientists helped them learn.

In this study, 14 free-flying honeybees were taught to recognize colors as 'symbolic representations for addition and subtraction,' where blue is addition and yellow is subtraction.

Bees entered a Y-shaped maze. At the maze entrance, they viewed a sample set containing a specific number of blue or yellow shapes. Next, they flew through an opening and chose between two possible options: If the elements they first saw were blue, the bees would need to fly to the decision chamber that had one more than the sample they first saw (addition!). If the shapes were yellow, the bees would need to choose the option that contained one less shape than the sample (subtraction!).

In 100 trials, bees were rewarded with a drop of sugar water for the correct choice and punished for the wrong choice with a drop of quinine solution.

After training came the moment of truth in the testing phase: During tests that contained no reward or punishment, bees came up with the correct answers 63% to 72% of the time. That's not random chance.

In this study, bees were tested on the number range of 1 to 5 for their ability to add and subtract. Howard notes it would be useful to examine how bees would perform on larger numbers, such as 2 plus 3, or moving on to test more complex operations.

Why would a honeybee need to know math?

Addition and subtraction may not come in handy for a honeybee's day-to-day life, but the cognitive skills required for performing math are likely advantageous. The study's authors said that linking visual traits to a reward, such as the math tests the bees passed, is likely to help them on foraging adventures. For example, it would aid in remembering which flower traits (such as color, shape or size) may provide essential resources and which flower traits may not.

Previous studies have shown that bumblebees are capable of complex tasks. A 2016 study found that bees can learn and pass on skills to other bees. Is a bee-to-bee math class in order?

Howard told CNN she hopes through the results of this study, people will understand 'insects are not unintelligent. They're smart and can do cognitively demanding things.'