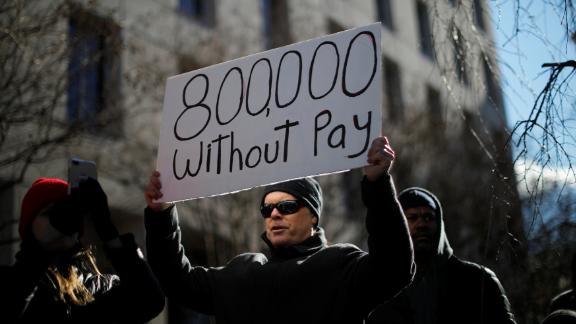 800,000 furloughed federal workers are not getting paid as talks to reopen the government go nowhere.

While Washington digs itself out of a weekend snow storm, negotiations for reopening the shuttered parts of the federal government seem just as frozen in the same place as they have been for three weeks.

Bottom line: The dynamics haven't changed between President Donald Trump and Democratic leaders. Someone will have to blink, and neither side is willing -- or, according to key players on both sides, currently has the political incentive -- to do so. The expectation at the moment is that this week will be just as fruitless as the last.

There are currently no meetings scheduled, no new proposals being traded, aides in both parties say.

Trump signaled how little progress had been made Monday morning.

"I don't know if we're close to a deal," Trump told reporters ahead of his departure to Louisiana. "This should be the easiest deal that I've ever seen. We're talking about border security."

Over the last 24 hours, Trump has privately touted a Washington Post-ABC News poll indicating that public support for a border wall has *increased to 42% from 34% last year, a source familiar with his comments tells CNN.

Trump has cited the poll as evidence that he should allow the shutdown to continue and extend his fight with Democrats, believing they will face more pressure to give him border wall funding. He has told aides and allies that he does not plan to budge on his demand that Congress fund a border wall.

"He's not going to budge even one inch," a source familiar with the President's mindset told CNN.

Trump's latest thinking is also part of the reason why he told reporters on Monday morning that he is "not looking to call a national emergency."

Even as Trump is focusing on one aspect of the Washington Post/ABC poll, that poll and others over the weekend -- including CNN's -- indicate that most Americans blame the President for the shutdown over Democrats.

Where we are: CNN polled seven senior GOP and Democratic aides who have been involved in these fights for years how they thought this would end. While everyone had ideas and theories, not one could give a firm, confident answer on the way out.

The reason why was probably best encapsulated by this, from a GOP aide: "We're used to dealing with rational actors -- the idea that once we get into situations like this, one side will see there's no way out and end the stupidity. But those usual triggers -- polls, pain of a shutdown on the country, frustrated members of your party -- just don't seem to move this President. Because it's not about them, or an outcome. It's about the fight."

This aide noted that when it comes to the fight, there's every indication that the President believes he is winning -- and that his GOP support, as shown by the same polls that show him on the wrong side of shutdown blame game -- has remained static.

Along those lines, Democratic lawmakers and aides make clear that this fight is yes, driven by opposition to the policy of a border wall, and yes, driven by the symbolism that the wall, as Trump's key campaign promise, represents. But as this drags on, don't minimize the fact that Democratic leaders are increasingly convinced giving an inch on this will only serve to incentivize Trump to take this route in future funding negotiations. Not giving him anything on this, aides say, is seen as a way to keep this from happening again. We'll see if that holds, but it's a key piece of all of this, particularly given the new House Democratic majority.

GOP aides have been pointing out that when the question is asked in polls about who's to blame for the shutdown with three options -- the President, Democrats and Congressional Republicans, the congressional Republicans are a distant third. Those numbers have been circulated to senators and aides, CNN has learned -- a signal that staying out to this fight, or at least not bucking the President -- has been a working (relatively speaking given everything is a mess) strategy up to this point.

Some White House officials have become increasingly convinced that some of the House Democratic freshmen class, specifically those from districts won by Trump in 2016, are vulnerable to breaking ranks with House Speaker Nancy Pelosi.

Democratic aides acknowledge that yes, the group is frustrated -- they came to Washington to work, not deal with a never-ending shutdown. But that they're far from gravitating toward the President. That said, there's talk from Republican officials that the White House will start inviting small groups of those lawmakers to the White House as soon as this week to ramp up the pressure on them.

Sen. Lindsey Graham, a South Carolina Republican and Trump ally on Capitol Hill, said Sunday he advised the President to agree to reopen the government for three weeks, hold negotiations over border security and the wall, and if they ended up failing, declare a national emergency.

"I did reject it, yes," the President said on his way out of the White House. "I'm not interested. I want to get it solved. I don't want to just delay it," Trump said.

Don't read Graham's comments as a sign that Graham is fleeing the President's side -- this is far more about Graham understanding that negotiations are more fruitful with a new deadline and anvil hanging over one's head than anything else (a trigger that simply doesn't exist in this current scenario, where there is no deadline -- or end to a shutdown in sight).

But it is worth noting that Graham has repeatedly tried to find ways to reopen the government and set the stage for future negotiations over a period of time (that was the crux of the proposal he was working on with a small group of Senate Republicans -- the same one the President pulled the plug on.)

Also key to this: the President explicitly asked Pelosi in the Situation Room if she would give him money for his border wall in a month if he agreed to immediately open the government. Pelosi said no.