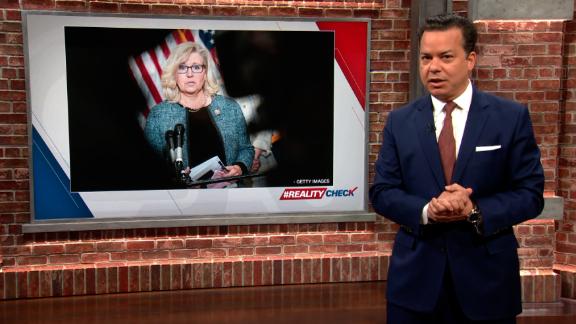 CNN's John Avlon sounds off on the opposition Rep. Liz Cheney (R-WY) is facing from the Republican party due to her refusal to back former President Trump's claim that the 2020 election was stolen.

There was once a fear that took over the Republican Party and the nation.

It was spread by a bullying demagogue who accused his opponents of being traitors and communists.

He leveled attacks without evidence, said he represented "Americanism with its sleeves rolled up."

His supporters embraced a cult of personality drenched in conspiracy theories, sure that God was on their side.

Their intensity -- their crushing certainty -- intimidated most politicians into silence. They did not want the trouble of being attacked by the party's activist base. They knew it was wrong but worried that if they told the truth they could lose a primary election.

But one woman spoke up.

She was from Maine and her name was Margaret Chase Smith -- the first woman popularly elected to the US Senate. It was 1950 and her target was Sen. Joe McCarthy.

The freshman senator stood alone on the floor of the Senate and issued what she called a "Declaration of Conscience."

No cameras captured the speech that day, but here's part of what she said:

"Today our country is being psychologically divided by the confusion and the suspicions that ... spread like cancerous tentacles of 'know nothing, suspect everything' attitudes."

An election was looming and Chase wanted the GOP to win, but she said, "I don't want to see the Republican Party ride to political victory on the Four Horsemen of Calumny -- Fear, Ignorance, Bigotry, and Smear."

She denounced the pursuit of "selfish political gain at the sacrifice of individual reputations and national unity" -- an approach that played into the "totalitarian techniques" of "confuse, divide, and conquer" ... that, if "unchecked, will surely end what we have come to cherish as the American way of life."

Her stand would inspire more of her fellow senators to find the courage to speak up.

And McCarthy would ultimately become isolated, consumed by lawsuits and scandals, revealed as a petty, paranoid narcissist. He died friendless and reviled.

The fact that Joe McCarthy's lawyer -- Roy Cohn -- later went on to mentor Donald Trump is more than a coincidence of history, doubly ironic because Donald Trump was the Kremlin's preferred candidate in two elections.

But the most relevant echo here is the lonely stand of Wyoming Congresswoman Liz Cheney and her looming purge from House leadership for the sin of refusing to back the Big Lie -- that Trump and not Joe Biden won the presidency.

Donald Trump will look no better than Joe McCarthy in the eyes of history -- and neither will his spineless apologists.

Republicans Kevin McCarthy and Steve Scalise have found a young congresswoman named Elise Stefanik to check the box and fill the slot for a woman in "leadership" -- a word that's been apparently redefined by this party to mean "unquestioning follower."

The divisions inside the Republican Party used to be about ideology.

But that's not what's at work here, because Liz Cheney is far more conservative than New York's Stefanik by every policy measure.

Cheney voted with Trump almost 93% of the time. Stefanik just 77%.

Cheney has a 77% rating from the American Conservative Union, while Stefanik has a 44% rating.

And the fiscally conservative Club for Growth fired off a tweet saying that, according to their rankings, Stefanik has the 4th worst fiscal record among Republicans in the House.

So this isn't about ideology. It's about a cult of personality in a party consumed by fear ... and it can cause opportunistic people to shed their principles like a snake's old skin.

Stefanik, for example, worked in the Bush-Cheney administration and has been an acolyte of Mitt Romney and Paul Ryan. When the Harvard-educated, upstate New Yorker was elected in 2014, she became the youngest woman (at that time) elected to the House. She promised to work across the aisle and modernize the Republican Party. In 2016, she was a supporter of John Kasich.

What happened? Apparently the age-old siren song of power and money over ethics.

When Trump was impeached the first time, Stefanik saw an opportunity to play partisan pit bull -- and she was rewarded with $13 million in donations for her reelection campaign.

Sucking up to Trump paid -- and she won praise from the President and Fox News.

So when it came time to vote to overturn the election -- after the January 6 attack on the Capitol -- Stefanik was an easy recruit for the sedition caucus. She became just another Ivy League populist who attacks democracy and then complains when she's called out.

Now, it seems she sees an opportunity to ride the Big Lie to more power. Her reelection slogan might as well be "liars prosper."

Liz Cheney has chosen another path -- and a higher reward -- writing in The Washington Post: "History is watching. Our children are watching. We must be brave enough to defend the basic principles that underpin and protect our freedom and our democratic process. I am committed to doing that, no matter what the short-term political consequences might be."

That's a Declaration of Conscience for our times -- a reminder that our political differences don't matter much compared to our stance on defending the truth and democracy itself.

Haunted Lafayette: Spirits still at work at the Adams Mill

Haunted Lafayette: Checking in at the Historic McDonald Airbnb