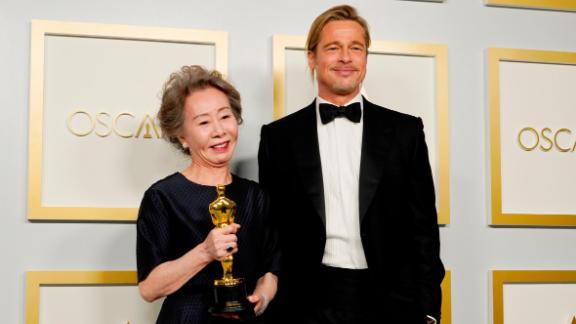 Yuh-jung Youn won the Oscar for best supporting actress for her performance in "Minari" on Sunday and made history by becoming the first Korean actor to win an Academy Award. Youn also gushed a bit about Brad Pitt, who presented her award.

Covid-19 wasn't the only reason the 93rd Academy Awards ceremony felt different from its predecessors. It made me wonder whether our expectations for what a movie is, or isn't, still matter.

Or, for that matter, whether Oscar Night, along with everything else in our once-familiar cultural landscape, will ever be the same, even after the "all clear" signal is given to return to the multiplexes.

Hopkins won for the second time for what many consider a career-crowning achievement as an Alzheimer's patient in "The Father" while McDormand won her third Best Actress Oscar as a displaced factory worker roaming the country for work and temporary shelter in "Nomadland."

The latter film also won Best Picture and a Best Director Oscar for Beijing-born Chloé Zhao, the first woman of color to win the award (and only the second woman ever).

Though widely acclaimed, Hopkins' performance wasn't considered the favorite going in. That position was generally ceded to the late Chadwick Boseman for his portrayal of an embittered jazz trumpeter in "Ma Rainey's Black Bottom." (Boseman died last August of colon cancer at 43.)

Even with "Nomadland" as a front runner in multiple categories heading into Oscars night, McDormand, who'd previously won Best Actress for 1996's "Fargo" and 2018's "Three Billboards Outside Ebbing Missouri," was regarded by award pundits as something of a long shot, given such formidable competition as Viola Davis in the title role of "Ma Rainey's Black Bottom" and Carey Mulligan as a feminist avenger in "Promising Young Woman."

Such outcomes summoned bemusement and outrage from social media, as did the ceremony itself. But then, complaining about the Oscars is as much of a national pastime as simply staring at them, no matter what kind of year it is.

Some of the complainers said the acceptance speeches went on longer than usual, prompting tweets about how much the orchestra was missed for playing people off the stage. Others missed the jokes, suggesting that Academy of Motion Picture Arts and Sciences might want to consider bringing back a comedian or two for next year's ceremony.

If the institution is in fact looking for a future host, it could simply give the whole proceedings over to Glenn Close, who lost for a record eighth time, but won the whole evening by shaking her sequined booty to E.U.'s "Da Butt." (Close correctly noted, upon questioning by actor-comic Lil' Rel Howery as part of a trivia interlude orchestrated by the evening's DJ, Questlove, that the song was completely ignored for Oscar nomination.) Maybe Close could make her losing streak into a running joke as an Oscar host. It worked for Bob Hope for decades -- in another, distant time.

That time belonged to an era of movies and, for that matter, entertainment which was on its way out, even before Covid-19 shut down multiplexes and repertory theaters all over the world. Streams and clouds are no longer adjuncts to big screens in darkened rooms. They are now the ball game. And just about every movie nominated in just about every category this year was screened mostly through Netflix, Hulu, Amazon Prime and other streaming services.

We were, therefore, confused. Did we need, this year, to see "Nomadland," "Promising Young Woman," "The Trial of the Chicago 7," "Ma Rainey's Black Bottom," "Minari" and other Oscar nominees in theaters to consider them "movies" as we once knew them? Or is this really the way it's going to be from now on, pandemic or no pandemic? And if that's the case ... should the Oscars still be the Oscars?

Certainly, the show produced by Oscar-winning director Steven Soderbergh looked very different with its stripped-down-but-still-tony setting at Los Angeles' Union Station and its remote locations for various nominees in Europe and elsewhere. It's not too different from the 1950s Oscar telecasts which often shifted from Hollywood to New York. Nonetheless Soderbergh and company were orchestrating the event more like an intimate TV show than the splashy palladium-style ceremonies viewers have been used to.

Covid-19 protocols may have been at work here. But the intimacy also reflected the way movie consumers have been taking in their content throughout the past year. Less glitz, less glamour, but also less of the gaudy cornball razzmatazz that often leads to impromptu embarrassment and painful jokes.

And yet, proof that such embarrassment was still possible in a retrofitted train station filled with formally dressed celebrities came in Best Supporting Actor Daniel Kaluuya's acceptance speech. In thanking his parents, Kaluuya, who won for portraying martyred Black Panther leader Fred Hampton, blurted something about how "incredible" it was that they had sex and created him. Afterwards, he sheepishly admitted that he went a little overboard and decided to stay off his cell phone for a while in expectation of a less-than-pleased reaction from his mom.

But it's exactly such caught-in-the-act-of-being-human moments that make us watch and remember the Oscars. There was therefore something reassuring about Kaluuya's gaffe, which will in future days likely be remembered as charming -- in a callow way.

Yuh-jung Youn, who won the Best Supporting Actress Oscar for playing the bawdy, big-hearted grandmother in the Korean-American family saga "Minari," also provided winsome, even fetching magnetism in her rambling acceptance speech -- flirting with presenter Brad Pitt, commiserating with losing competitor Close, thanking anybody and everybody. At one point, fellow supporting actress nominee Amanda Seyfried was seen mouthing the words, "So lovely." It was the kind of class that assured me that whatever is meant by "The Old Hollywood" lives on in younger stars like Seyfried.

Still, despite McDormand's entreaty at the ceremony's conclusion that its viewers go see "Nomadland" and other Oscar-nominated movies on large screens in theaters as soon as they can, "Old Hollywood" and everything associated with seems to be fading to black.

Granted, that's not an altogether bad thing. There's greater diversity in content and in talent both behind and in front of the cameras -- enough to suggest that some, maybe even most of those changes are for the better.

As for the rest ... well, if one thing remains constant it's what the late screenwriter William Goldman always said was the first and only rule in the movie business: Nobody knows anything. A lot of Oscar pundits who thought they had this year's awards figured out in advance will likely concur.

Life in prison sought for man in Indiana dismemberment case