The GOP's carnival of hypocrisy 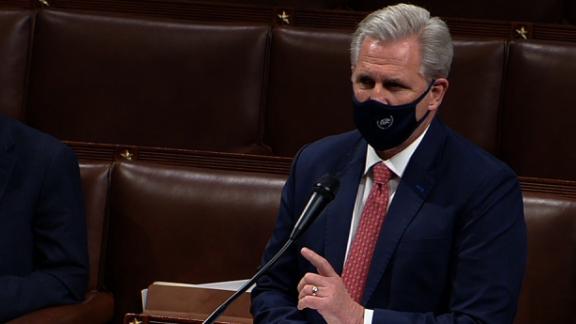 History will record that the second impeachment of President Donald Trump branded him forever as a catastrophically immoral and divisive leader. It will also mark most of his defenders in the Republican Party as duplicitous opportunists who claimed at the last moment that the country needed unity after they had contributed to the rhetoric bringing the nation to the precipice of civil war.

In their speeches in the House of Representatives during the impeachment debate, the 197 opponents of the measure put on a carnival of hypocrisy, a spectacle in which they tried to persuade their colleagues, the country, and perhaps themselves, that after they spent months trying to overturn the legitimate results of a democratic election, suddenly they cared about unifying and healing the nation above all else.

Who could possibly believe such a fiction?

Perhaps they think they can convince us that they now believe nothing matters more than coming together because they spent so much time spreading a different falsehood, claiming that Trump won in November.

In the waning days of Trump's smoldering, suppurating presidency, what's one more lie?

Democrats described the events of Jan. 6. Rep. Jamie Raskin noted the chilling fact that Trump's mob may have been hunting Vice President Mike Pence and House Speaker Nancy Pelosi to stage their coup, "but every one of us in this room right now could have died."

"Let that sink in," said Rep. Eric Swalwell, "Our president incited our citizens to attack our Capitol."

Maybe facing a murderous mob does concentrate the mind. Republican House Minority Leader Kevin McCarthy, who tried to assume a statesmanlike tone in the debate, deserves some credit in spite of voting against impeachment. At least he acknowledged that Trump "bears responsibility for Wednesday's attack on Congress," and tried to shut down some of the ridiculous lies making the rounds in a deluded Trumpistan. The riot, he said, was not caused by Antifa.

Importantly, McCarthy finally recognized that Joe Biden won the election. But imagine that: It took him more than two months to get here. He doesn't get a pass. He doesn't get to clear his name after months of fomenting and spreading the corrosive Big Lie about the election.

McCarthy waxed almost poetic in his exhortation to national unity. He talked about calling on our better angels and deplored the sordid events. "What we saw last week is not the American way." He rejected impeachment because, "United we can deliver peace, strength and prosperity...divided we will fail."

The mind reels. This is the same McCarthy who voted against certifying the results of the election even after the coup attempt. With his vote, he supported their goals. "We solve our disputes at the ballot box," McCarthy claimed, after two months of backing an effort to steal an election.

This is the same McCarthy who told Fox News after the election Trump lost that, "we cannot allow this to happen...join together and let's stop this."

Pick a random name from among the 147 Republicans who voted to steal the election from the American people and you're likely to find someone saying impeachment is too divisive. People like Debbie Lesko, who voted against certifying, now finds it "concerning" that Democrats are pursuing impeachment just one week before Trump leaves office and "at a time when our country needs unity."

Similarly, Rep. Ted Budd, another member who voted against certifying Biden's election, tweeted, "If Democrats say they want unity, this isn't the way to show it."

"This doesn't unite the country," Jordan declared of the impeachment, perhaps giggling inside at hearing himself explaining that the impeachment, "in no way helps the nation deal with the terrible events of last week that we all condemn."

All the Republicans who repeated the lie, relentlessly fueling a dangerous falsehood about the election, who enabled Trump, who failed to stand up to him until this moment -- and even now -- contributed to the "terrible events that we all condemn."

If Republicans want healing and reconciliation, it may have something to do with the threats they are receiving In what is the closest to a fascist tactic we have seen in this godforsaken presidency. Republican Rep. Peter Meijer wrote in the Detroit News of how one of his "profoundly shaken" colleagues had acknowledged after last week's riot that voting to certify Biden's win was a constitutional duty -- but instead voted to overturn the election result for fear of endangering family members.

In the end, 10 brave Republicans broke with the hypocrites and voted to impeach Trump.

As it happens, it's not just Trump-defending Republicans who worry about the country's deep and inflamed divisions. It's not just Republicans that would like to see healing and unity. Most Americans are disheartened and frightened about the depths and the dangers to which Trump has brought the nation.

The right way to heal those divisions, the right way to unite the country, is to come together in repudiating the poisonous presidency of Donald Trump. What better way to do that than by impeaching and convicting him? Even if he completes the full four years of his term, Americans will have formally declared his presidency a grave national error, telling future generations -- and even current ones -- that Trump's values and tactics are abhorrent to this nation.

That's the way to achieve unity. The claims we're hearing that impeachment is bad for healing are lies. They are a way to avoid responsibility, to protect the President, to sweep the filth under the rug. At a time like this, when the country should stand together, what America needs from its leaders is courage, not hypocrisy.