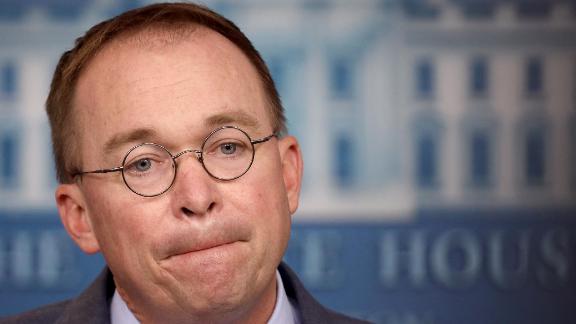 Mick Mulvaney, who formerly served as President Trump's chief of staff, has resigned as special envoy to Northern Ireland after a pro-Trump mob stormed the US Capitol and delayed proceedings to certify the US election.

In announcing his resignation, special envoy for Northern Ireland and former White House chief of staff Mick Mulvaney said, "We didn't sign up for what you saw last night."

Thanks for those nice words, but this is too little, too late.

Of course, Mulvaney wasn't the only member of the Trump administration to resign following the horrifying violence at the Capitol. Other White House officials included deputy national security adviser Matt Pottinger, deputy press secretary Sarah Matthews, White House social secretary Anna Cristina Niceta and the First Lady's chief of staff, Stephanie Grisham. All of them were clearly uncomfortable with what they saw unfold on Wednesday -- a President Donald Trump-inspired insurrection, fed by objections to the fair and legal count of the Electoral College vote by Republican Sens. Ted Cruz and Josh Hawley.

Trump, Mulvaney noted, is "not the same as he was eight months ago." However, Mulvaney also penned a piece in the Wall Street Journal in November headlined, "If He Loses, Trump Will Concede Gracefully," so he is not the best source for accurate information on his now former boss.

Trump has not changed. So, what has?

The politics of the moment.

Everyone now turning their backs on Trump, from South Carolina Sen. Lindsey Graham to Arkansas Sen. Tom Cotton, knew that the President lost the November election and, worse to some, cost Republicans control of Congress on his way out of office.

They appear sincere in their belief that Trump's actions this week were terrible, but after four years of sitting idly by while Trump shredded democratic norms and stirred conspiracy theories, or, in the case of Mulvaney, standing right by his side, they know that dumping Trump now, at the end of his term, is not only the right thing to do but the easy and convenient thing to do as well.

In January of 2016, I made clear that, as a former senior official for the Republican Party, I could not in good conscience support Donald Trump if he became the GOP nominee. That decision has cost me personally, professionally and financially.

But despite Republican National Committee staffers and many Republican friends telling me I would regret this decision, I never did. It was the right decision and, frankly, an easy one to make. Trump reconfirmed it for me on a weekly basis, when he attacked immigrants, the press and members of his own party who dared to criticize him; when he put his personal interests before the country's; and when he failed spectacularly to lead this country through a global pandemic.

As a Catholic, I believe in welcoming converts. But having your "road to Damascus moment" -- as Graham apparently did when he declared "enough is enough" Wednesday night -- suggests that the conversion is more about political expedience than about doing the right thing. Otherwise, what took so long, when all of this was so predictable? Trump has incited violence and sown division since he declared his candidacy in 2015.

In the end, this is exactly what Mulvaney signed up for, whether he cares to admit it or not.

And to those Republicans and allies of the President who remain publicly silent, or supported the objections to the Electoral College, you know better. Your decision puts your squarely on the wrong side of history.

Hi: 31° Lo: 23°
Feels Like: 22°
More Weather
A cold and breezy morning but a dry afternoon and evening expected

No leads yet on body found in eastern Tippecanoe County

Fairfield Twp. Board going above trustee to approve 2022 budget