The triumph of Stacey Abrams over Donald Trump 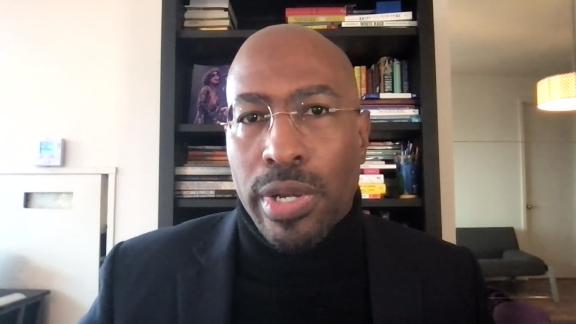 CNN's Van Jones explains the "genius" of the Black grassroots campaign in Georgia that helped Raphael Warnock be elected the state's first Black senator, according to the network's projection.

With one Senate seat secured for Democrats in Georgia and the other Senate race yet to be called, it is already clear that there is a lesson to be learned from the runoffs. It's not just that President Donald Trump has largely undermined and ruined the Republican Party. It is also that progressive grassroots leaders (led overwhelmingly by Black women) have reimagined, recreated and rebuilt the state's Democratic Party coalition.

We should not stop at denouncing the lack of smarts on the Republican side. We must also praise the real genius of Georgia's activists and organizers. This is not just a story about the final failure of Trump. It is a story of the success of Stacey Abrams -- and many of the unsung, bottom-up, inspirational leaders with whom she has worked for years. They not only helped secure a Democratic Georgia Senate seat, but they helped elect the first Black senator in Georgia, the Rev. Raphael Warnock.

Of course, there is plenty to criticize on the Republican side.

For example, the GOP ran two candidates who spent their time demonizing their opponents as "radical socialists" rather than offering their own vision to inspire voters. They marched lockstep with Trump, rather than showing independent leadership. Kelly Loeffler made the unwise decision to continually defame and malign the pastor of Dr. Martin Luther King's church. Her attacks on the Rev. Warnock's sermons and ties to other pastors caused a backlash that likely turned out more Black voters who wanted to defend the Black church. The strategy failed for Loeffler.

Poor judgment from Republicans was not confined to candidates in the Peach State. In Washington DC, Senate Majority Leader Mitch McConnell was all too happy to play the part of Ebenezer Scrooge at Christmastime. When he blocked the $2,000 Covid-19 relief checks that progressive Democrats and President Trump both demanded, he single-handedly gifted Democrats a winning closing message: Vote for us, and we will get you enough money to survive.

To top it all off, President Trump has spent the past two months telling lies about the general election outcome. And those lies likely suppressed his own party's voters. He convinced legions of Republican voters that their votes had not counted in November, despite any solid evidence to back up his claims. The GOP in Georgia paid the price, as many Republicans apparently threw up their hands in frustration at the whole system and stayed home. Worse, Trump made it impossible for Republicans to consistently use their strongest potential message -- that voters must help stop Democrats from controlling the White House, House and Senate -- by his refusal to acknowledge that he was going to have to turn the White House over to Biden.

But all that is still only half the story.

The other half was how smartly the progressives played their hand.

First of all, for years, the best leaders on the ground in Georgia have been putting grassroots organizing ahead of party politics. Georgia organizers built from the base, focusing on a community-oriented, person-to-person approach. They knocked on doors and made phone calls -- for years. The heroes were not national Democratic Party operatives but local leaders and organizations. It was not just Stacey Abrams -- who lost her bid for Georgia governor in 2018 but never stopped working -- though she is at the top of the list.

We also need to give credit to the organizations and leaders who dedicated their time and energy to highlighting critical issues and mobilizing voters: Tamieka Atkins and ProGeorgia, Helen Butler and Georgia Coalition for the People's Agenda, Deborah Scott and GA Stand Up, LaTosha Brown and Black Voters Matter Fund, Nsé Ufot and the New Georgia Project, Color of Change and Mijente, which worked hard to mobilize the Latino vote.

All of this work likely produced a major swing toward Democrats.

It was also a win for "Black joy" over a certain kind of White rage. So much of our politics since Trump emerged on the scene has been about right-wingers stoking or managing White anger. And so much of 2020 was understandably and inevitably about Black heartbreak -- from the Covid-19 catastrophe to police abuse. But the first election of 2021 was powered by Black joy, instead. I talked to organizers who said they used music, food, dance and fun to engage people at a deeper level. Their efforts helped the Rev. Raphael Warnock to become only the 11th Black US senator in history -- the first in Georgia. (You can still fit a list of every Black senator ever in a single tweet! That's how rare such wins are.)

Lastly, it was a win for real people over party royalty. A few years ago, the Democrats nominated Michelle Nunn and Jason Carter for statewide elections and lost badly. They were both Democratic Party royalty. On the other hand, the Rev. Warnock is not, yet he won. He was untested as a candidate, but his personal story is compelling and his leadership qualities are authentic. Despite Georgia's painful history -- one sadly blighted with anti-Black and anti-Jewish bigotry -- all Georgians soon will have a Black pastor representing them in the halls of the US Senate.

How did we get to this seemingly miraculous outcome? It's simple.