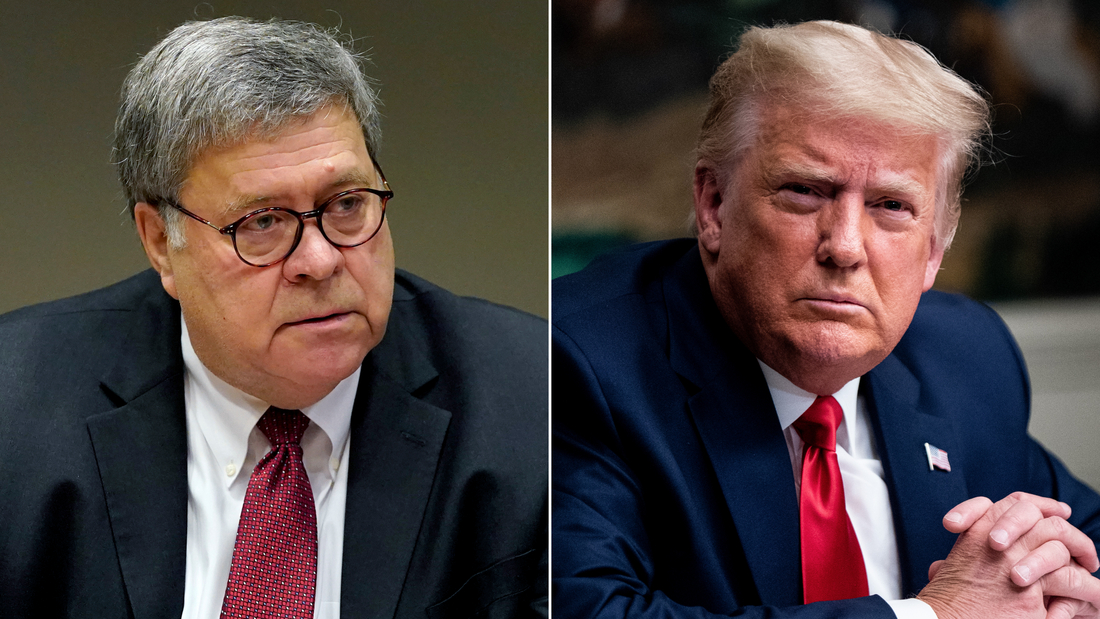 William Barr will soon be gone as attorney general.

Barr took a principled stand earlier this month when he publicly refuted President Donald Trump's nonsensical claims about widespread election fraud. But Barr did so only after nearly two years of frequently lying to the American public, twisting the law beyond reason, trampling longstanding Justice Department norms and principles, and aggressively using the Justice Department to carry out President Donald Trump's political agenda. Let there be no mistake about his legacy: Barr has degraded and corrupted the Justice Department like no attorney general in recent history.

In retrospect, Barr told us who he was even before he took the job, when he sent an unsolicited letter to the Justice Department pre-judging Robert Mueller's obstruction of justice investigation, calling it "fatally misconceived." Sure enough, Barr eventually distorted Mueller's findings to the public so grievously that the normally reserved Mueller took the dramatic step of writing a letter calling out Barr. Mueller noted that Barr's summary letter "did not fully capture the context, nature, and substance of this Office's work and conclusions."

A federal judge hearing a dispute about the Justice Department's redactions to the Mueller report agreed, finding that Barr's public "inconsistencies" with the Mueller report "cause the Court to seriously question whether Attorney General Barr made a calculated attempt to influence public discourse about the Mueller Report in favor of President Trump..." The judge pointedly noted Barr's "lack of candor," which "call[s] into question Attorney General Barr's credibility."

Barr's tanking of the Mueller report was his original sin, but it also was only an opening act. During his tenure, Barr intervened in politically charged cases, undermining his own Justice Department prosecutors by selectively seeking unwarranted leniency for Trump political allies Roger Stone and Michael Flynn.

Barr refused to investigate potential wrongdoing relating to the Ukraine scandal that resulted in Trump's impeachment. And the Justice Department on his watch authored a preposterous memo that aimed to prevent Congress and the public from ever learning about the whistleblower's complaint in the first place.

Barr dismissed Geoffrey Berman, the US Attorney for the Southern District of New York -- which had several ongoing investigations of people close to Trump -- and got caught lying to the public when he initially claimed Berman would be voluntarily "stepping down" (which Berman promptly refuted).

Beyond these milestone acts of malfeasance, Barr continually debased himself and the Justice Department in fealty to Trump. Barr tried to have the Justice Department assume the legal representation of Trump in a civil lawsuit bright by E. Jean Carroll. Barr effectively argued that it is part of the President's official duties to defame a woman who has accused him of sexual assault; a federal judge promptly rejected Barr's legal rationale. Barr booked a Trump-owned hotel for at least $30,000 to throw a lavish holiday party in 2019. (A Justice Department official said that the party was not an official Justice Department event and would be paid out of Barr's pocket.)

And Barr belittled and infantilized the thousands of dedicated, line-level prosecutors who are the heart and soul of the Justice Department, comparing them to children at a "Montessori preschool."

Even in the months leading up to the election, Barr mindlessly parroted Trump's most irresponsible claims about the potential for massive voter fraud. The attorney general made wildly exaggerated claims to the media and to Congress about the potential for voter fraud, conspicuously failing to offer up any compelling or reliable evidence. He blamed purported left-wing, so-called Antifa-related extremist groups for widespread violence, but remained conspicuously reluctant to acknowledge the threat of right-wing extremism -- consistent with Trump's stump speech on the campaign trail.

Only recently -- once it became apparent that Trump's days (and his own) in office were nearing an end -- did Barr show some integrity when he publicly contradicted Trump's false claims about widespread voter fraud. Barr deserves credit for taking that stand, but it in no way cancels or balances out his absurdly long track record of dishonesty and corruption.

Most fundamentally, Barr -- who never tried a case as a prosecutor -- showed no appreciation for the fundamental principles that make the Justice Department a unique bulwark of independence. He sought not to do justice, or to protect and serve the American public. Instead, Barr spent his tenure as attorney general undermining the Justice Department's credibility and independence in service of Trump.

No doubt, the Justice Department will recover, in time. But it will take many years to repair the deep damage that Barr has done.