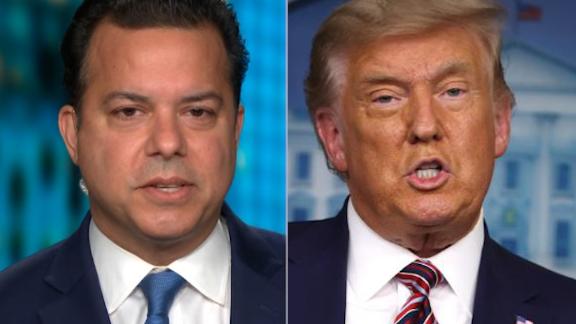 CNN's John Avlon breaks down President Trump's unwillingness to accept the results of the 2020 election.

A socially distanced Thanksgiving might be a blessing in 2020. If we don't listen to public health warnings, we could end up trying to strangle each other across the turkey table.

Let's face it: There is a lot of lingering bad blood between family members and friends after four years of President Donald Trump. When we should be turning the page after a hard-fought political contest, some 68% of Republicans roughly a fifth of all Americans -- seem to have bought into the baseless lie that the election was "rigged." Now, Thanksgiving itself has been turned into a culture war battle cry against the backdrop of an escalating pandemic.

Good people can, of course, disagree about politics. But refusing to recognize the results of a not particularly close democratic election is well beyond politics as usual in America. In some conversations with friends and family, finding common ground rooted in shared facts requires the civic equivalent of landing a triple axel at the Olympics. After all, how do you reason someone out of something that they weren't reasoned into?

For the sake of your loved ones and society, I'd hope that most of you are choosing to follow CDC guidelines and spend the holiday at home with few, if any, extended family members. But even that's no guarantee of a politics-free holiday -- and family Zooms can also degenerate quickly. So, as a cheat sheet to counter deeply held disinformation, here are some baseline facts that could come in handy:

As for conspiracy theories about stolen votes, national, state and private election officials, including Trump administration security staffers, stated that the "election was the most secure in American history" with "no evidence that any voting system deleted or lost votes, changed votes, or was in any way compromised."

When it comes to evidence, the Trump legal team has lost or withdrawn from at least 30 court cases since the election, with one Republican federal judge in Pennsylvania dismissing the campaign's claims stating: "(T)his Court has been presented with strained legal arguments without merit and speculative accusations, unpled in the operative complaint and unsupported by evidence." If that sounds harsh, consider that eight of Trump's biggest lies have been verified when submitted to investigation by Republicans in Congress or the Trump Justice Department.

But facts only go so far with folks who believe that Trump -- who's been caught in more than 20,000 "false or misleading claims," according to the Washington Post -- is the only person telling the truth. Polarization and conflict increase groupthink. What we're dealing with in some cases is a belief system that is beyond reason -- and what are you supposed to do with that in conversation? It's hard to just nod along when the subject is QAnon.

In search for answers, I spoke to Steve Hassan, a leading cult-deprogrammer and author of "The Cult of Trump." Before you get up in arms, I'm not saying that Trump supporters are members of a cult -- but Hassan does have some insights from his work that could be useful in finding a way to reason together when arguments seem beyond reason.

As a young honors student, Hassan fell under the sway of the Moonies, formally called the Unification Church that many critics liken to a cult, and was convinced to fast during Watergate because God wanted Richard Nixon to remain President. Hassan counsels that his work is not focused on "people who are just stone-cold pragmatists" about Trump but "people who are actually true believers." Among those folks, "what doesn't work is a direct attack on the leader, the doctrine, or the group ... that digs people's heels in."

Extreme political polarization amounts to indoctrination, but Hassan believes that "the cure to unethical influence is ethical influence" -- and that involves a process of listening to a person respectfully and gently reminding them of once deep-seated values and principles, drawing out implicit parallels where indoctrination has obscured objective truth.

In Hassan's practice, this process takes days -- there is not a single conversation quick fix. For the purposes of this exercise, let's use members of Trump's legal team as examples.

Rudy Giuliani used to say that "to be locked into partisan politics doesn't permit you to think clearly." He used to condemn Pat Buchanan's paleo-conservative populism as dangerous, which is the closest analogue to what Donald Trump advances in the political arena. And as a one-time legendary US attorney, he deeply believes in the law as a search for the truth. Discussing those principles -- with respect and separate from the current controversies -- might help depolarize the conversation.

In the case of Trump lawyer Jenna Ellis, who is very vocal about her Christian faith, a conversation about the Sermon on the Mount might eventually cause her to reflect on whether accusing Republican pollster Frank Luntz of having a "micro-penis" is what Jesus would have done. Or you could work toward asking her what she meant when she called Trump an "idiot" in 2016 and slammed his base for not caring about "facts or logic."

A key point of depolarizing conversations is to help folks feel heard while finding common ground. The goal is not to achieve an instant conversion but instead to begin communication that breaks down the walls that keep people in separate realities buffeted by "alternative facts."

"If I had one bullhorn," says Hassan, "I'd say to everybody, 'Reach out to your loved ones who believe in Trump, your friends and family members, and stop calling them names and stop trying to win arguments, and remember the good old days and even agree not to talk politics for a while until you rekindle the warmth in your relationship.'"

That's good advice for any Thanksgiving, consistent with the civic purposes of the holiday as proclaimed by President Abraham Lincoln during the Civil War: "(T)o heal the wounds of the nation and to restore it as soon as may be consistent with the Divine purposes to the full enjoyment of peace, harmony, tranquility and Union."

Demand booming for guns and tactical gear in Lafayette

The Great Lakes just set a record for lack of ice