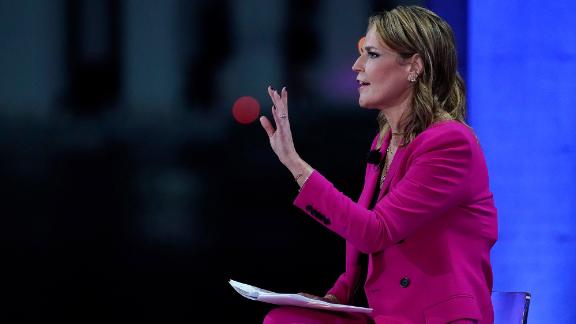 What was the most alarming part of President Donald Trump's Thursday night town hall event?

The moment when he not only refused to denounce, but actually appeared to defend QAnon, a collective of conspiracists so extreme in its beliefs that one shudders to hear what its followers think.

When a group of people believe conspiracy theories so outlandish that one can't imagine anyone taking them seriously, it's tempting to laugh and then ignore them. But the once-obscure QAnon, a movement sprung from the internet and identified by the FBI as a domestic terrorist threat, has grown so much and so fast, and spread its bizarre ideology so widely and forcefully, that the time for laughing has ended.

NBC Town Hall moderator Savannah Guthrie asked Trump if he would "disavow QAnon in its entirety." Instead, Trump falsely said "I know nothing about QAnon," adding, "I do know they are very much against pedophilia."

Fanatically devoted to President Donald Trump, the QAnon faithful believe -- baselessly -- that the world is run by a globalist cabal of Satan-worshipping pedophiles and cannibals controlled by the "deep state," Hillary Clinton, the Dalai Lama, Pope Francis, and Hollywood celebrities including Tom Hanks, Oprah Winfrey and others.

According to QAnon's creed, these malevolent powers traffic and imprison children, sexually abusing them and drinking their blood, which supposedly contains a life-extending substance. In their absurd mythology, which they take literally, Trump is the superhero, here to save the children from the Satanists in a secret war.

If you find it incredible, wait for the really shocking part: Hundreds of thousands, possibly millions of people, in the US and around the world, have become followers of QAnon.

The poison is not just spreading here. When US troops arrived in Germany for NATO exercises earlier this year, QAnon believers claimed it was a covert operation by Trump to liberate Germany from Chancellor Angela Merkel.

The QAnon conspiracy theories are direct descendants of medieval antisemitic libels. As historians and extremism scholars have explained, lies about global-dominating, blood-drinking Jews have been the recipe, the fuel, that has made antisemitic fires burn over the centuries; all the way to the raging inferno of the Holocaust. QAnon is a 21st century version of a Nazi cult, according to genocide prevention experts.

In the United States, Republican Marjorie Taylor Greene, who has promoted QAnon theories, won the August primary runoff in Georgia's deep red 14th district, and is expected to soon be elected to Congress. Republican leaders initially distanced themselves, but Trump praised her effusively, calling her, "A future Republican star," who is "strong on everything." A pariah no more, she endorsed on Thursday Kelly Loeffler, a current interim senator in Georgia, in Loeffler's bid to win the seat she holds. Loeffler enthusiastically accepted, giving QAnon legitimacy in the Senate.

Earlier this month, the House overwhelmingly condemned QAnon. Interestingly, 17 Republicans rejected the resolution. This, despite the fact that last year the FBI alerted field offices, specifically mentioning QAnon as part of the growing threat of "conspiracy theory-driven domestic extremists."

Many first heard about QAnon in the Pizzagate incident, in December 2016, when a North Carolina follower drove to Washington on a mission to use his AR-15 rifle to free children supposedly imprisoned by Hillary Clinton and her cohorts in the basement of a pizzeria. The restaurant didn't even have a basement.

The QAnon conspiracy holds Trump almost as an object of religious devotion. But as with Guthrie at Thursday's Town Hall, Trump played coy for reporters in August when asked about QAnon. "I don't know much about the movement other than I understand they like me very much, which I appreciate," he said. "I've heard these are people that love our country."

When a reporter asked, "QAnon believes you are secretly saving the world from this cult of pedophiles and cannibals. Are you behind that?" Trump replied, "Is that supposed to be a bad thing or a good thing?" adding, to the delight of QAnon followers, "And we are actually, we're saving the world," from its problems.

QAnon started in the bowels of the Internet, on far-right message boards, where Q, supposedly a government official with top security clearance, revealed select secrets. But its numbers have exploded as the result of the coronavirus pandemic.

The anxiety and uncertainty around the pandemic turned into a super-spreader of the QAnon infection, as hundreds of millions of people stayed home, on line, fearing for their jobs and their health, and hearing conflicting information -- particularly in the United States, and often from the President -- about the seriousness of the disease that upended their lives.

And QAnon has latched on to the crisis, blaming the "elites" -- from the World Health Organization, a favorite Trump target, to vaccine manufacturers. Anti-vaxxers jumped on the bandwagon, and social media, particularly Facebook, turbocharged the message.

Facebook recently conducted an internal investigation that found thousands of groups and pages supporting the QAnon theory, with millions of followers, according to documents obtained by NBC News. And European investigators have found hundreds of thousands of pages originating in more than 70 countries.

Last week, three years after QAnon emerged, Facebook finally decided to shut down any pages and groups associated with it. But the pathogen has already escaped the lab.

The libel has traveled back to its birthplace. Data scientists, intelligence experts, and extremist watchdogs who follow the spread say far-right extremists in Germany, among whom the conspiracy theory carries a familiar antisemitic ring, have taken to QAnon with gusto. By some estimates, some 200,000 Germans have joined, with other groups emerging in the Netherlands, the Balkans and across Britain.

The pandemic, the economic dislocation and the discrediting of the mainstream media all offer the perfect medium, the ideal conditions for QAnon to continue growing beyond its early petri dish.

QAnon's beliefs are absurd. But, again, there is nothing funny here.

Much of its frictionless spread has been over social media, which bears a great responsibility to eradicate it from its platforms. Law enforcement officials must raise its level of alert and cooperate with other governments to prevent it from becoming an even greater danger. And everyone -- consumers, voters and citizens -- must keep a watchful eye.