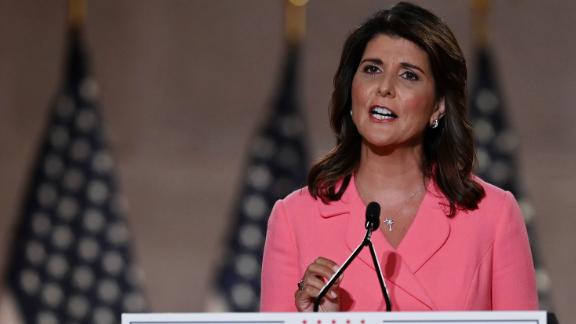 President Trump's former ambassador to the UN Nikki Haley says that "America is not a racist country" at the Republican National Convention. For more on Haley's speech, check out CNN's facts first database.

Indian Americans are having their moment in the political spotlight. Nikki Haley, the Indian American former ambassador to the United Nations and former governor of South Carolina, had a prominent speaking role at the Republican National Convention last night, as the party seeks to improve on its bleak performance among voters of color in 2016 and 2018.

While Haley spent much of her speech criticizing Democratic candidate Joe Biden and praising President Donald Trump, she also invoked her Indian immigrant heritage and position as a "Brown girl in a black-and-white world" as she argued for a constructive way of uniting the country in the face of racial hatred.

Haley's speech took on added symbolism coming on the heels of the Democratic National Convention's nomination of Kamala Harris, a Black woman with Indian and Jamaican immigrant parents, for vice president of the United States.

In her acceptance speech last Wednesday, Harris paid tribute to her Indian immigrant mother and her maternal aunties (chiththis), capping a week of heightened press coverage as reporters mined the details of Harris's memoir for perspectives from experts and confidants in both the US and India.

The juxtaposition of Harris and Haley -- two Indian-American women who have reached exalted heights of political power -- in prime-time convention speaking roles is a testament to the growing political power of their community.

In addition, Indian Americans tend to have the highest levels of education and income in the United States, and their campaign contributions have been on a significant upward trajectory over the last two decades.

So, who among the two will prove more influential in winning the hearts and minds of Indian American voters? If it were simply a matter of ethnic pride at play, Harris would likely hold the advantage.

Yes, some grumbled early in the presidential campaign that Harris was not sufficiently vocal about her Indian or Asian heritage. Since then, however, she has spoken more openly about her Indian connections, from remarks made on the stump -- in Iowa, for example -- to viral videos of cooking sessions with Mindy Kaling.

Haley also had some early political stumbles, when she reportedly listed her race as "white" on a voter registration card in 2001. Since being the US ambassador to the United Nations, however, she has spoken out more openly about her Indian heritage and has generally gotten favorable coverage in the Indian and Indian American press.

A posting as US ambassador to the United Nations, however, pales in comparison to being named on a presidential ticket. Thanks to a crush of favorable media coverage, the Harris nomination has generated an outpouring of ethnic pride in India as well as from Indian Americans in the United States.

It has rivaled the kind of coverage that President Trump enjoyed with his 50,000 strong rally in Houston with Indian Prime Minister Narendra Modi in September 2019 and his subsequent visit to India in February 2020.

The Harris advantage with Indian Americans, however, extends beyond mere symbolism and ethnic pride. Indian American voters are much closer to Democrats than Republicans on a variety of important policy issues, from immigration reform to gun control, health care expansion and environmental protection.

Indian Americans also are much more likely to identify with the Democratic Party than the Republican Party, and have strongly favored Democratic presidential candidates from Obama in 2008 and 2012, to Clinton in 2016.

As decades of political science research have shown, it is difficult to sway partisan voters, either based on their party identification or how consistently they have voted for one party's presidential candidate over another.

Haley's speech was an important symbolic moment for the Republican Party, one that has seen its fair share of racially incendiary and outwardly racist rhetoric. She invoked her immigrant heritage and election as South Carolina's governor despite her "Brown skin" as a validation of the American Dream and the country's racial progress.

Haley's speech very well may position her as a front-runner for president in 2024 or 2028. It is unlikely, however, to change the minds of many Indian American voters. Their partisan identities and issue preferences have been aligned with the Democratic Party over many elections, and ethnic pride, no matter how strong, is unlikely to make much of a difference this November.

FedEx: Mass shooter was a former employee of the company