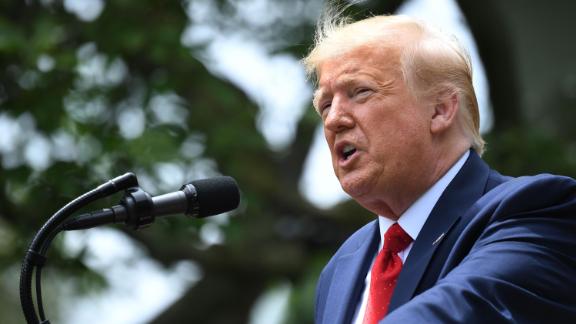 President Donald Trump announced an executive action to encourage police to adopt the "highest and the strongest" professional standards during a speech in the Rose Garden.

One of the reasons Rayshard Brooks, a black man fatally shot last week by a police officer in Atlanta, is dead is because long ago, white Americans came to a consensus that their fear mattered more than the lives of men who looked like him.

Those long-dead white Americans from the past set us on a path to criminalizing things they didn't like -- or people they wanted to dominate. That began long before the technology that brought us viral videos of white people calling the police on black people for barbecuing in the park or asking a woman to put her dog on a leash.

Somewhere along the way, the rest of us became convinced that America's culture and way of policing was just the way things always must be, which is part of why now black men aren't the only victims of police violence.

Reform alone can't fix this -- especially not the weak and illogical reform President Donald Trump offered up on Tuesday.

Until the deeper mindset linking policing to racist fear changes, executive orders signed by Trump -- or any president or mayor or governor -- or laws passed by Congress won't ever be enough. Changing how we are policed might put a dent in the problems we face, but it could also ensure 25 years from now someone else will be writing a column wondering why police keep unnecessarily killing so many people. And again 25 years after that.

That consensus grounding American police culture in fear and pursuit of nonwhite people was born with this country's first police, who were slave patrols in which every able-bodied white man was to take part. That legacy directly informs why many consider it an appropriate response to send officers equipped with batons and bullets and Tasers to respond to a call about a man asleep in his car outside a fast food restaurant.

Once you've been convinced your well-being and comfort matter more than the humanity of others, you become willing to offer the benefit of the doubt (or worse, don't even care) when police shoot a boy like Tamir Rice, a 12-year-old playing with a toy gun in a park in a state in which it is legal for adults to carry real concealed weapons, or choke Eric Garner, a man selling loose cigarettes on a street corner.

You may think it unseemly or unfortunate but won't bother yourself to demand change because a few dudes killed unnecessarily is (much as you may hate to admit it) the price you're willing to pay for the role our police play in your own sense of safety.

We could have set up a society in which our instincts would have told us to call a Lyft to take a drunk man home, or to knock on his window and ask if a loved one could come get him. But we didn't. Because of that, too many of us have been conditioned to believe guys with guns are our best option, or the only real one.

It's why a single Willie Horton ad has more power than the stories of a thousand flawed men who committed egregious acts but have been rehabilitated and are now pillars of society. Politicians know this. Heads of police unions know this. White women know this. They know that if they tap into that deep-rooted fear and angst, hard-won reforms will be abandoned or reversed.

It's not a coincidence that police unions backed Trump after the Department of Justice (during the era of the nation's first black president) began holding police departments accountable like never before, and that the DOJ under Trump rolled back many of those efforts once he became president. That shouldn't be lost during discussions about Trump's police reform executive order that links federal funding to better training and directs the attorney general to create a database to keep track of bad acts committed by police.

The President's words in the Rose Garden Tuesday left no doubt about his allegiances -- or the logic of fear at the heart of American policing. "Without police," he said, "there is chaos." At an event ostensibly designed to tout police reform, one day after calling the death of Brooks a "terrible situation," Trump failed to address racism directly.

Instead, he went on the attack against his political rivals and doubled down on his hard-line, "law and order" stance, a political calculation solidified by his use of the words "safety and security" and his statement that Americans "demand law and order." His effort to address growing national suffering and protest over police brutality was, at best, a thinly veiled excuse to defend law enforcement and signal to white voters where he stands.

There's a reason Trump is doing this. The fear that pervades America's system of policing is also foundational to its politics. It's systemic in multiple ways. What ails us can't be solved by just a little more anti-bias training or the kind of de-escalation program the officer who shot Brooks had participated in.

That's why the Equal Justice Initiative found that we never really shed that early mindset, just found new ways to channel it.

"The decline of lynching in the studied states relied heavily on the increased use of capital punishment imposed by the court order following an often accelerated trial," the group founded by famed civil rights attorney Bryan Stevenson found. "That the death penalty's roots are sunk deep in the legacy of lynching is evidenced by the fact that public executions to mollify the mob continued after the practice was legally banned."

We keep pouring old wine into new wineskins and keep wondering why so little has changed. Brooks was effectively issued the death penalty for the alleged sin of getting drunk and falling asleep in the parking lot of a fast food restaurant, just as black men in early 20th-century America were lynched or sold into a "slavery by another name" for the sin of public spitting or other actions that are crimes only because we've foolishly deemed them such.

We are the United States of America, the shining city on the hill, the place the rest of the world looks for guidance. And yet, we far outpace every other advanced country in the rate of police killings and mass incarceration. If we really are exceptional -- as we keep insisting we are -- that can't be by accident. We like it this way.

"I would expect that should I grab a police officer's Taser in a tense situation caused by my own behavior and point it at said police, I could reasonably expect to get shot."

According to this kind of logic, Brooks deserved what he got. Comply or die. As a veteran of the Los Angeles Police Department wrote in The Washington Post a few years ago "if you don't want to get shot, tased, pepper-sprayed, struck with a baton or thrown to the ground, just do what" the cop says.

Never mind that full compliance doesn't guarantee that you won't become a victim of police violence.

Half-measures and skirting around the edges are no longer good enough. They never were and never will be. We can't change policing if we don't attack that legacy at its roots in fear. It's obvious that police unnecessarily killing Brooks during protests sparked by police violence is not enough to convince Trump to take this seriously.

The rest of us will have to lead the way. And that means finally grappling with this ugly legacy that must be yanked out by its roots -- beginning in November and by vowing to punish any politician who uses bigotry or evokes bogeymen to win votes. That's what we must do if we really want to end this cycle of police violence, followed by weak reform, followed by more police violence.