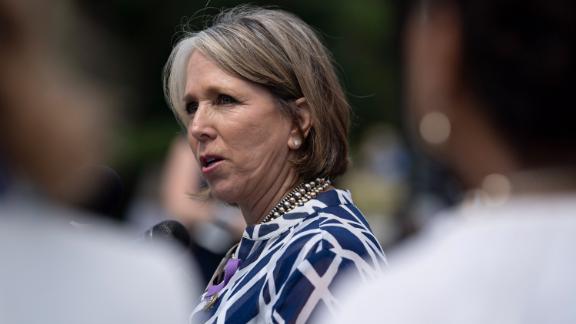 Presumptive Democratic presidential nominee Joe Biden is right to narrow his vice presidential selection to a woman. After decades of other countries electing women to lead on the global stage, it is time for the United States to get on the right side of history.

And though she is not the most obvious choice, there is one contender who we should all be pulling for: New Mexico Gov. Michelle Lujan Grisham.

When Biden committed to choosing a female running mate in mid-March, the coronavirus pandemic had not yet reached its peak in the US. However, in light of both the ongoing public health crisis and the economic free fall, the stakes of his selection for the number two spot are even higher. And people of all political stripes are craving strong leadership.

Governors, like Lujan Grisham, are flexing their leadership muscles in response to the coronavirus crisis, and the American people are responding positively. America's governors currently have much higher approval ratings than President Donald Trump and slightly higher than federal health agencies for their pandemic response, according to a poll from Monmouth University, as well as several state surveys.

Lujan Grisham's response to the pandemic has been exemplary. She took swift action in the early days of the crisis that, according to state officials, was key to New Mexico's success in flattening the curve. New Mexico was among the first dozen states to announce school closures and stay-at-home orders -- on March 16 and March 23, respectively. It also set up the first drive-through testing for coronavirus in the country March 16 and opened over 50 testing sites around the state, prioritizing at-risk populations.

Even before the pandemic began wreaking havoc, a February tracking poll from the Kaiser Family Foundation found health care and the economy to be the two most pressing issues among likely voters in the country, scoring 26% and 23% respectively. And, for swing voters, health care rated even higher: 28%, according to the survey. For all the focus that Democrats placed on health care to win in the 2018 midterm elections and define the primary debates this cycle, here's a novel idea: How about a vice presidential nominee with actual health care experience?

Of the six Democratic women governors in the country, only Lujan Grisham has previously led a statewide health department. During her tenure, New Mexico doubled the number of health centers from 34 to 68, expanded in-home care for seniors, built a new state lab, all while improving infectious disease prevention programs.

But perhaps more important than her leadership or health record is her electoral record -- and Lujan Grisham has a record of winning big. In 2018, she took the governor's mansion back after two terms of Republican control, winning by more than 14 points. She also outperformed combined pre-election polls by an extra 6 points. As a US Representative, her victories were even more convincing: she won her final term by a 30-point margin.

Lujan Grisham also has one quality that is key to winning this year: She is willing to fight for whatever she believes in and with all the force she can muster. She literally crashed a White House meeting on immigration in 2018 to speak to Trump. As the then-chair of the Congressional Hispanic Caucus, she rode with then-House Democratic Whip Steny Hoyer to the meeting, waltzed in uninvited and told reporters that Congress and the administration were making a Deferred Action for Childhood Arrival compromise "harder than it ought to be."

Generally, I'm not a proponent of identity politics, finding ethnic-based candidacies unnecessarily divisive, I fully support diversifying our national leadership to reflect our people. Lujan Grisham is not just a Latinx statewide leader, but also part of another underrepresented, fast growing part of our population: the West.

The Democratic Party has never had a vice president or president from the West. States like Nevada, Arizona, and Utah are among the fastest-growing in the country, even as population growth slows nationally. Western states may not be not electoral giants, but this region is where people continue to move. It has always been a place where progress roams free, but it's also been mixed with streaks of libertarianism, with wide open spaces harkening back to an attitude of live and let live. Lujan Grisham would bring that Western grit and perspective back to Washington, as she did when she served in Congress.

Giving a nod to the Latinx population should pull candidates toward the southwest. New Mexico is still by far the most Latinx state percentage-wise. Having a former chair of the Congressional Hispanic Caucus, who has helped Democrats nationwide formulate policy for the Latinx community at large, would be a bold step for the party, and the right move for our country, whose global image as compassionate and welcoming has been deeply stained in recent years.

New Mexico has a governor capable of leading in times of hardship. Her record shows she can do the same for America. Joe Biden should choose as his running mate: Michelle Lujan Grisham.

Hi: 41° Lo: 20°
Feels Like: 34°
More Weather
Warmest weather since December is ahead with good timing with the weekend rainfall...

WLFI and several local fire departments are helping with your fire safety this winter. CLICK HERE.

Mulhaupt's moving out of downtown Lafayette

A middle schooler was insecure about his haircut. So his principal fixed it himself instead of disciplining the boy for wearing a hat