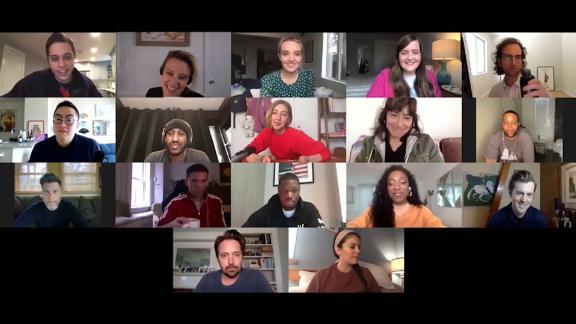 "Saturday Night Live At Home" attempted to recreate the feel of a normal episode by having sketches, Chris Martin as a musical guest and Tom Hanks as host.

"Saturday Night Live" returned on Saturday with its first new episode after stopping production due to the coronavirus pandemic. And much like the first "SNL" after the terrorist attacks of September 11, 2001, the show opened with a more somber theme. But the big difference was that in that first show after 9/11, there were no jokes at the expense of then-President George W. Bush. On Saturday's show, however, there were many directed at President Donald Trump -- and Trump earned every one.

I worked on the production staff of "SNL" on 9/11. I can still recall the eerie quiet that filled the "SNL" offices in the weeks that followed, replacing the usual horsing around by the cast and writers. Like the rest of the nation, those who worked on this iconic comedy show were in shock. Plus, there was the question about what would be considered (appropriately) funny in this new America?

"SNL"'s first post-9/11 show aired on September 29, 2001 and opened with then-New York City Mayor Rudy Giuliani, surrounded by first responders, speaking of the lives lost and the heroes. "SNL" executive producer Lorne Michaels soon joined Giuliani on stage, asking, "Can we be funny?" to which Giuliani replied -- to big laughs -- "Why start now?"

Flash forward nearly 20 years, to the first "SNL" in the midst of a deadly coronavirus pandemic that has taken the lives of over 20,000 Americans. There were some similarities, but also some of the glaring differences that reflect today's America. Due to social distancing, Saturday's show was not broadcast live from the famed Studio 8H but remotely from the homes of cast members. Show host Tom Hanks was in his kitchen, where he noted that he and his wife, Rita Wilson, had recovered after contracting the virus last month. Hanks, much like the show after 9/11, addressed the idea of "SNL" being funny in this new world: "Will it make you laugh? Ehh, you know, it's 'SNL.'"

Giuliani was also a part of Saturday's show. But as a testament to how much things had changed since 9/11, the former New York City mayor who became Trump's personal lawyer wasn't heralded on stage as a hero. Rather, Giuliani became a punchline in a joke told by "SNL" Weekend Update segment co-anchor Colin Jost about Trump reportedly taking advice from him about "unproven cures" for Covid-19.

The most notable difference, though, between that first post-9/11 "SNL" show and Saturday night's was Alec Baldwin's comedic filleting of Trump on the show. "SNL" didn't do that to Bush in that September 29, 2001 show -- not, to my knowledge, because writers were told to avoid such jokes, but because it didn't need to be said. It was a different time and, more importantly, a vastly different president.

Trump is not Bush in so many ways. For starters, at the time of the first post-9/11 "SNL," America had rallied around Bush, giving him an approval rating in the Gallup poll of 90%. In contrast, a CNN poll released last week found Trump with only a 45% approval mark.

The most glaring difference between the two Republican presidents is that Bush didn't make 9/11 about himself. Bush didn't brag about the TV ratings for his briefings, nor did Bush hold daily press media conferences where he would go on at length slamming the media, spewing misinformation and even going after Democrats -- all things Trump has done over the past month.

That's why Trump earned every punchline on Saturday's show. Trump, as depicted by Baldwin, began bragging that, "I'm happy to report...that America is now number one in the world for coronavirus," adding, "Number one while I was president. #Americanumberone. #Notimportantwhy."

Baldwin, continued with the "Trump" brag: "My approval rating is up, my TV ratings are through the roof, and every night at 7:00 PM all of New York claps and cheers for the great job I'm doing." (The daily applause is actually for New York's first responders.)

"SNL" also took a jab at Trump's continuous attacks on reporters who ask him questions that he doesn't like. When Weekend Update co-anchor Michael Che asked "What exactly is your advice, because it seems to change every 24 hours?" Baldwin's "Trump" responded, "That's a nasty question, you're very nasty." Baldwin then added, "I've been consistent all along. I've always said it was a giant hoax, that we should take seriously, even though it was invented by the Democrats: Impeachment Part Two." (This joke skillfully highlighted Trump's February 28 comment about the threat of the coronavirus being politicized by the Democrats as their "new hoax.")

There was even a snide shot at Trump's idea of "experts," with Baldwin saying, "We have to listen to the experts on this one: Me, Hannity, Jared Kushner, and Mike Lindell from MyPillow." (Trump recently included Lindell along with several other executives at a press conference.)

"SNL," a show that thrives on mocking political leaders, collectively understood that mocking Bush immediately after 9/11 was the wrong through to do. Today, mocking Trump is the right thing to do. He deserves every barb for his comments and actions during this crisis.