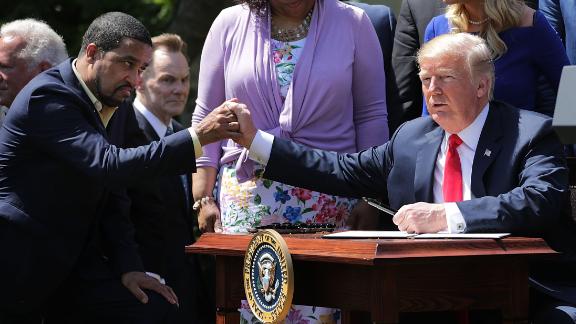 A nonprofit created to support President Donald Trump and his administration's policies donated more than $230,000 to a group which awarded cash prizes to black attendees at a Cleveland event they billed as a Christmas "cash giveaway." CNN's Sara Murray reports.

A nonprofit created to support President Donald Trump and his administration's policies donated more than $230,000 to a group that recently awarded cash prizes to black attendees at a Cleveland event they billed as a Christmas "cash giveaway."

America First Policies, the nonprofit arm of a pro-Trump super PAC which was started by former Trump campaign aides, issued a $238,000 grant to the Urban Revitalization Coalition Inc., in Cleveland Heights, Ohio, according to its 2018 tax return first published by the Center for Public Integrity. The charity, co-founded by Pastor Darrell Scott and Kareem Lanier, handed out thousands of dollars in cash as part of an event promoted as a "Christmas Extravaganza." Other cash giveaways by the organization have been said to be planned.

America First Policies tax filings show it provided the grant to Scott's group for "general support," one of just six groups that received grants of more than $5,000 from the organization that year.

Scott is one of the President's most visible African American supporters and served as a surrogate during the 2016 campaign. He co-chairs Black Voices for Trump and has advised the President on initiatives aimed at urban communities as well as the FIRST Step Act. Lanier, along with Scott and other Trump supporters, sit on the leadership of the National Diversity Coalition for Trump.

"These events are not affiliated with or sanctioned by the President's campaign," a Trump campaign spokesperson told CNN on Thursday when asked about the cash giveaways.

America First Policies communications director Kelly Sadler told CNN: "America First Policies is proud to support The Urban Revitalization Coalition, a 501(c)(3) non-profit which was instrumental in providing grassroots support for the passage of the First Step Act and other Trump administration policy initiatives aimed at improving the lives of those living in urban areas. Our 2018 grant helped get the organization off the ground."

In December, Scott and Lanier held an event in Cleveland where they gave away $25,000 in amounts over $300, including a gift of $1,000. An online video shows names were drawn and called, with recipients coming on stage to accept envelopes with cash.

The coalition also honored individuals the organization said impacted the local community at the event -- those did not appear to involve cash but did include a trophy. One of those leaders was Ja'Ron Smith, a deputy assistant to Trump in the White House.

As a designated 501(c)(3) nonprofit, the coalition is prohibited from making "statements in favor of or in opposition to any candidate for public office," according to the Internal Revenue Service.

"When we sat down with President Trump, who is absolutely amazing when we go. Whatever we ask for pretty much it happens. I don't know how. To God be the glory. Pretty much, it happens," Lanier said in a video of the event posted on Facebook by Cleveland.com.

At another point in the event, Lanier praises Trump's work to create federally designated "Opportunity Zones," which allow investors to get capital gains tax breaks for investing in community development in the zones. The IRS describes the zones, which Trump signed into law as part of his tax cut package in 2017, as "an economically-distressed community where new investments, under certain conditions, may be eligible for preferential tax treatment."

"President Donald Trump, the one they say is a racist, is the first president in the history of this country to incentivize the people that have the money to put it into areas where it's needed," Lanier said, adding that "Trump has done his part by signing the legislation into law."

In a video tweet posted prior to the cash giveaway event started, Scott said: "This is how Black folks Pro-Trump events begin."

The potential conflicts of interest over the cash giveaways were first reported by Politico.

Marcus Owens, a veteran tax lawyer who served as director of the Exempt Organizations Division for the IRS, says the activity raises questions about whether it's appropriate for a politically oriented nonprofit to donate funds to a group set up to do charitable work. And charities, such as Scott's group, are prohibited from engaging in political campaign activity, including expressing support for candidates at their events, he said.

"Violation of this prohibition may result in denial or revocation of tax-exempt status and the imposition of excise tax," according to the IRS.

Adav Noti, a senior director at the Campaign Legal Center, told CNN that it was "unclear" whether the group's actions would constitute enough to initiate an enforcement action from a campaign finance perspective. However, he agreed that they "have serious exposure under tax law."

Noti said the tweet from Scott may have crossed a legal line.

"'Pro-Trump' might actually cross the legal line. It would depend on the context, but you could certainly argue that calling yourself pro-Trump suggests electoral advocacy," he said.

The IRS would not comment on specific allegations of IRS violations.

Neither Lanier nor Scott responded to CNN requests for comment on Thursday. On Wednesday night, Lanier had defended the cash giveaways and the President, adding the coalition was "simply blessing" black people.

"He don't need URC to get BLACK VOTES - HIS POLICIES ARE DOING THAT! URC IS SIMPLY BLESSING our people!!!!!," Lanier tweeted.

'We haven't gotten one dime from the Trump campaign'

Lanier said at a 2019 Urban Revitalization Coalition event in Atlanta that the organization was funded solely by "private donors" who were not associated with the Trump campaign.

"I will say this about our organization. We haven't taken one dime from the federal government. We haven't gotten one dime from the Trump campaign or any campaign. All the monies that we've gotten into our private foundation has come from private donors that support what we're doing," Lanier told an audience, according to a video of the event posted on Facebook.

He did not mention the organization received its grant of nearly a quarter of a million dollars from the pro-Trump group in 2018.

The coalition was also slated to giveaway $30,000 and honor the President and his senior adviser and son-in-law, Jared Kushner, and Johnathan Holifield, the executive director of the White House Initiative for Historically Black Colleges and Universities at an event at Virginia Union University in Richmond, Virginia, on Martin Luther King Jr. Day earlier this month, according to fliers circulated promoting it.

The event was canceled amid growing outrage by current and former students. The university issued a statement at the time saying it "was not a part of planning for this event, was not informed of who would be participating, and was not a part of distributing information about the event."

White House press secretary Stephanie Grisham at the time also told CNN in a statement: "The President's staff was exploring the event as one of many options for Martin Luther King Jr. Day, but it was never confirmed and the President was not aware of it."

'The liaison between the White House and urban America'

In the video from the coalition event in Atlanta last year, Lanier bills the coalition as "the liaison between the White House and urban America." Much like the Cleveland event, he praised Trump and criticized former President Barack Obama.

"I know a lot of people don't like (Trump). Whether you like him or not it is what it is. He's the President. Barack ain't president no more. Hallelujah," Lanier said.

He also claimed that when Trump won the presidency, he and Scott turned down plush administration jobs to help urban America, with Trump's blessing.

More specifically, during public events and appearances, representatives for the nonprofit have focused heavily on claiming it brings together burgeoning urban entrepreneurs and investors for Opportunity Zone projects.

Despite repeatedly promoting Opportunity Zone projects at the Cleveland giveaway last month, a spokesperson for the Greater Cleveland Partnership, which bills itself as "one of the largest private-sector economic development organizations in Northeast Ohio," told CNN that their organization has not heard of the coalition "and do not know of any projects or investments that the company has made."

In a radio interview last year, Urban Revitalization Coalition Connecticut State Director Chiquita Stephenson said that the coalition was "commissioned" to work alongside the executive branch to develop Opportunity Zones. An informational video from the organization similarly relays that it was "commissioned" by the President, using a soundbite of Trump and images of Lanier and Scott in the Oval Office.

Lanier, speaking at the Atlanta event, also indicated that the coalition would be bringing White House and Treasury officials to the city to talk about Opportunity Zones. The coalition's website claims that White House and Treasury officials would join the Urban Revitalization Coalition in a 70 city tour to "answer questions, comments and concerns that are asked by community stakeholders."

Individuals associated with the coalition's state advisory council have faced ethical questions for their past involvement with nonprofits.

The cash giveaways have been criticized as an attempt to by the Trump campaign to solicit African American votes. In December, Cleveland City Councilman Blaine Griffin wrote in a Facebook post it was "'condescending ' and 'insulting' to come into a community that is dealing with crushing poverty and think $25,000 in gift cards is going to come close to addressing our problem."

Griffin told CNN that the coalition had not made "a ping on the radar" in terms of Opportunity Zone projects in Cleveland.

Trump has long suffered from low poll numbers among African Americans. In 2016, exit polls showed that Trump secured 8% of the African American vote. And more recently, a Washington Post-Ipsos poll released earlier this month indicated that more than 8-in-10 African Americans believed the President is a racist and that he has contributed to making racism a bigger problem in the US. Nine in 10 black Americans also said they disapprove of Trump's job performance.

Trump has denied accusations of racism. But as President, he's faced blistering criticism over his public and private statements, such as in 2017, when he blamed "both sides" after violence sparked by a neo-Nazi rally in Charlottesville, Virginia. He also privately referred to some African nations as "s***hole countries" and criticized protests over police brutality led overwhelmingly by black NFL players. In July 2019, he denigrated Baltimore as a "rat and rodent infested mess."

"What they're doing is really sophisticated in their attempt to try to circumvent sort of IRS policies of endorsing candidates and nonprofits," she said.