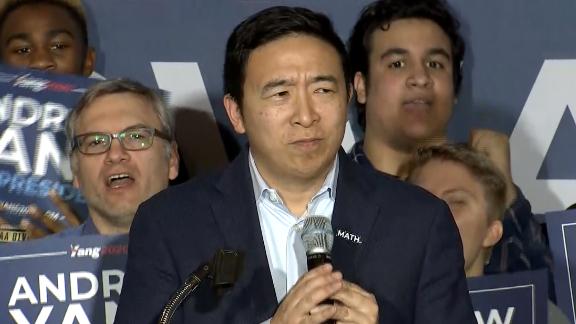 Democratic candidate Andrew Yang announces that he will be suspending his campaign for president following the New Hampshire primary.

I remember when Andrew Yang told me he was running for president (we've traveled in the same circles for it must be 20 years). My thoughts must have been obvious from my expression, because he instantly explained: "I know that it would take a miracle for me to win. But I think I can make a difference."

Though Yang is dropping out now, after an incredible, historic run, he unquestionably accomplished that goal. He proved that a sizable segment of the US electorate can imagine an Asian American in the White House -- putting a crack in the glass ceiling for a population that has always been treated as more of a source of campaign donations than a pool of national leadership talent.

As he regularly said in interviews, he could "vividly remember what it was like growing up a young Asian boy very rarely seeing someone who looked like me on TV at all, unless it was in the context of a kung fu movie. ...It makes me very happy and proud to help others see that there are no limitations on the way you can contribute and lead in this country."

Yang isn't the only candidate proving that the Democratic electorate has a broader vision for leadership than anyone might have expected. This is, after all, a primary cycle in which Pete Buttigieg, an out, gay, small-town mayor, is now a frontrunner; in which candidates range in age from 37 (Buttigieg) to 79 (Sanders); in which, at least early on, a record number of women and people of color were in the fighting mix.

But one could argue that Yang was the mine-canary indicator that this primary cycle would not go at all as anyone had expected: He was an unknown entrepreneur with zero political experience, running on a signature idea pulled from the radical fringes of the American consciousness: his proposal to address the impact of automation on American labor by giving techno-reparations to every adult in America over 18 -- the human workforce -- of $1,000 per month.

In less than a year, he went from being derided as a novelty candidate to being treated as a genuine primary rival, and an important thought leader, seeding the Universal Basic Income concept, what he calls the "Freedom Dividend," into the mainstream of the Democratic agenda. Elizabeth Warren said she'd read Yang's New York Times-bestselling book, "The War on Normal People," and was "open" to the idea, while Buttigieg, Julian Castro and Tulsi Gabbard all expressed interest in UBI experiments and pilot programs.

Yang did all of this with minimal resources and viral support, leveraging a vast network of Asian American connections and the passion and extraordinary energy of the "Yang Gang," his extremely online supporters.

They created terabytes of memes, videos and other content, engaged -- generally, though not always, with persistence and civility — in millions of conversation threads, and made the blue hat emoji an instantly recognizable one across the Internet.

Of course, it was hardly a stumble-free journey. Yang attracted attention from some of the darker denizens of the net, some of them drawn to his message and his quirky, techno-contrarian vibe, others promoting his campaign just for the lulz. He generated anxiety among Asian Americans who worried that some of his statements and jokes, his MATH hats and jokes about Asian doctors, were amplifying stereotypes that the community had fought for generations to try to erase.

But as I noted on Twitter upon reading the news: Yang didn't just make history -- he unquestionably put a sizable dent in the future as well. He's earned himself an ongoing place in the national conversation. He established the resources and support to be taken very seriously in any campaign or organization he might launch going forward.

And if Obama was the first mobile-app-driven candidate of our digital era, and Trump the first social-media-driven one, Yang was the first to crowdsource himself into relevance, which will surely change the landscape of politics forever.

The promise that in America "anyone can grow up to be President" has never felt more real, and for that, Andrew Yang deserves our thanks.

Remains found in house that burned after man evaded arrest