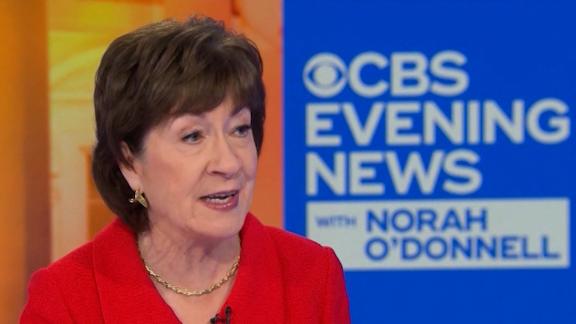 After much hemming and hawing, Maine Sen. Susan Collins announced on Tuesday that she would vote to acquit President Donald Trump on both impeachment articles brought against him by the Democratic-controlled House.

"I do not believe the House has met its burden that the President's conduct, however flawed, warrants the extreme step of immediate removal from office," Collins said in a speech on the Senate floor. "This decision is not about whether you like or dislike this President or agree with or oppose his policies or approve or disapprove of his conduct in other circumstances. Rather it is about whether the charges meet the very high constitutional standard of treason, bribery or other high crimes or misdemeanors."

Which, OK. Collins' argument is similar to the one made by other on-the-fence Republicans like Sens. Lisa Murkowski (Alaska) and Lamar Alexander (Tennessee.) And it boils down to this: Sure, what Trump did isn't great -- and I wouldn't have done it. But inappropriate isn't the same thing as impeachable.

Had Collins left it there, she would have been fine. But she didn't leave it there. In an interview with CBS' Norah O'Donnell, Collins said "I believe that the President has learned from this case" and that Trump "will be much more cautious in the future."

These expectations are, of course, patently ridiculous. Which was made abundantly clear when reporters -- at an off-the-record pre-State of the Union gathering with Trump -- asked him about Collins' comments. "It was a perfect call," he reportedly told them.

Because of course he did. Trump has never once said anything else about the July 25, 2019, call with Ukrainian President Volodymyr Zelensky. Nor has he ever acknowledged even the slightest whiff of inappropriate behavior in tasking his personal lawyer, Rudy Giuliani, to run a sort-of shadow foreign policy in the country -- trying to pressure the Ukrainians to open an investigation into Joe Biden.

That refusal to ever admit any wrongdoing or even a lapse in judgment is in keeping with Trump's general attitude about his life, which is that he never does anything wrong and to the extent he is criticized it's because haters, losers and the elites are jealous of him. This is not a man prone to introspection or self-critique. Never has been, never will be.

Collins knows that. Trump has made that personality quirk clear from the day he decided to run for president. He doesn't change. He believes himself to be in the right. In every situation. Always.

All of which makes Collins' feeble attempt to defend her vote for acquittal frankly laughable. She has every right to say that she doesn't think that Trump committed impeachable crimes. And that convicting him would set a dangerous precedent for future presidents.

But attempting to suggest that this whole impeachment investigation has been some sort of teachable moment for Trump and that he "has learned from this case"? Give me a break. No one -- including Collins -- believes that.