This is where Wuhan coronavirus cases have been confirmed worldwide 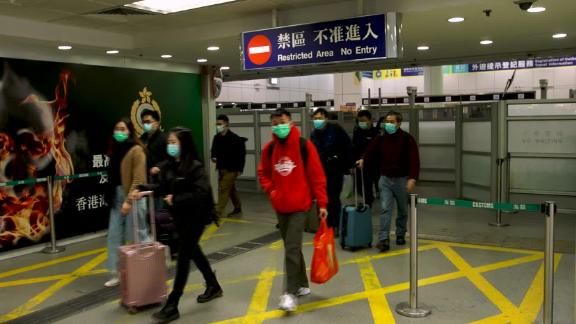 The Hong Kong government announced they are restricting some of its border crossings with mainland China to block the spread of the Wuhan coronavirus. Many think it's not enough. CNN's Blake Essig reports.

The Wuhan coronavirus has spread throughout the world since the first cases were detected in central China in December. At least 132 people have died and more than 6,000 are fighting symptoms including fever and breathing difficulties.

China's National Health Commission has confirmed the virus can be transmitted from person to person through "droplet transmission" -- where a virus is passed on due to an infected person sneezing or coughing -- as well as by direct contact.

There are more than 80 confirmed cases of Wuhan coronavirus -- but no deaths so far -- in 18 places outside mainland China.

A number of countries, such as the United States and Japan, have evacuated their nationals on flights from Wuhan, capital of Hubei province.

This is a full list of places outside mainland China with confirmed cases of the Wuhan coronavirus.

At least seven people in Australia have been confirmed to have the Wuhan coronavirus. The latest case is a 44-year-old Chinese man from Wuhan who is in a stable condition in isolation at the Gold Coast University Hospital, according to a statement from Queensland's chief health officer on Wednesday.

On Wednesday, Prime Minister Scott Morrison announced the government is negotiating plans to evacuate more than 600 Australian nationals from Hubei province. They would be quarantined for 14 days on Christmas Island, an Australian territory that currently hosts a largely empty immigration detention center.

The latest Australian government travel advice for China is to "reconsider your need to travel."

Cambodia reported its first case of Wuhan coronavirus on Monday -- a 60-year-old Chinese man who flew into the country from Wuhan with three family members. They tested negative for the virus, according to a Ministry of Information statement. The man's condition was stable and he only showed mild symptoms, it said.

A Canadian couple has tested positive for the Wuhan coronavirus in Ontario -- both the man and woman had visited Wuhan before getting ill.

The Canadian government has warned its citizens against all travel to Hubei province, including the cities of Wuhan, Huanggang and Ezhou. It said the risk of the new coronavirus spreading within Canada remained low.

France was the first European country to confirm cases of the Wuhan coronavirus, with two patients hospitalized in Paris and the other in Bordeaux, according to the country's health department head Jerome Salomon.

A fourth case of coronavirus was confirmed Tuesday, which involved a Chinese tourist from Hubei. His condition was "serious," Salomon said.

France will send a first plane to evacuate its citizens back from Wuhan on Thursday, according to French health minister Agnes Buzyn.

The flight is expected to take French nationals who do not have symptoms of the virus. A second flight carrying those who may have been infected is also being planned.

Germany has confirmed a total of four Wuhan coronavirus cases in Bavaria state -- all the cases were related and occurred at the same workplace, according to the health ministry.

The first patient, a 33-year-old German man who lives in Landsberg and works in Starnberg, Bavaria had not been to China, but was in a meeting with a Chinese national who was later diagnosed with the coronavirus, the head of the Bavarian State Office for Health and Food Safety said Tuesday.

Another 40 employees of the company have been identified as close contacts, and will be tested by authorities as a precautionary measure.

The semi-autonomous city of Hong Kong, which borders mainland China, has confirmed eight cases -- all infected patients had spent time in Wuhan.

Hong Kong has temporarily closed some of its borders with China and has stopped issuing travel permits to mainland tourists.

West Kowloon station, where high-speed rail runs between the city and mainland China, is closed until further notice. Half of all incoming flights from China have been canceled. Residents of Hubei province, where the virus was first reported, are also being denied entry to the city.

Most government offices, except those involved in emergency and essential services, will be closed for the rest of the week. All primary and secondary schools will also be shut until at least February 17. Long queues are seen outside pharmacies as people look to buy face masks. This comes as Hong Kong recalls painful memories from the severe acute respiratory syndrome (SARS) outbreak in 2003, a pandemic that killed more than 280 people in the city.

There are seven confirmed cases in Japan, including a man with no travel history to Wuhan. The man, in his 60s, is a bus driver who drove tour groups from Wuhan for nine days before getting ill. His is the first case of suspected human-to-human transmission in Japan.

The Japanese government is evacuating citizens from Wuhan. On Wednesday, 206 Japanese nationals arrived on a chartered flight operated by ANA, according to Japanese officials. Another 450 will depart Wuhan on later flights that are currently being arranged by the government.

Macao, a semi-autonomous city in southern China, has confirmed at least five cases of the Wuhan coronavirus.

The outbreak has had a devastating impact on tourism in the gambling enclave, which relies heavily on mainland Chinese visitors. Gambling is illegal on the mainland and Lunar New Year is usually a particularly busy time for Macao's casinos. But not this year -- tourism to the city has dropped 73.6% year-on-year, the Macao government announced Wednesday.

All residents of Hubei province and non-residents who traveled to Hubei in the past 14 days will be denied entry to Macao, until they show a doctor's letter certifying they are clear, according to Secretary for Administration and Justice Cheong Weng-chon. Anyone who has been to Hubei in the past two weeks is also banned from entering casinos.

Malaysia has confirmed seven cases -- all Chinese nationals. The most recent cases include a four-year old child, a woman and a 52-year-old man, according to state news agency Bernama.

Malaysia has temporarily suspended all visas for Chinese citizens from Hubei province. It has also established an emergency response team at its Beijing embassy to provide assistance to Malaysian citizens in China.

There was one confirmed case in Nepal -- a 31-year-old Nepali PhD student who lives in Wuhan but flew to Nepal earlier this month. He was admitted to hospital in Kathmandu on January 13, but was subsequently released on January 17 after his condition improved.

The Health Ministry said people in close contact with the patient have been identified and are being monitored.

Singapore confirmed its fifth case of Wuhan coronavirus on Tuesday, bringing the total number of cases to five, according to the Ministry of Health. The latest case, a 56-year-old woman from Wuhan, is in an isolation room at the National Centre for Infectious Diseases.

The Ministry of Health has advised against all travel to Hubei province and non-essential travel to mainland China, adding that all travelers should monitor their health closely for two weeks upon their return to Singapore.

It has also urged employers to implement flexible work arrangements, such as working from home or telecommuting, for employees who have been to China in the past 14 days.

The South Korean government plans to send four chartered planes to Wuhan to evacuate its citizens, according to foreign affairs ministry spokesman Kim In-chul. He said there were about 700 South Koreans in Wuhan who want to return to South Korea.

Kim said those wishing to board the flight would have to go through an inspection process by medical staff, and they would be required to stay at a government provided facility to prevent the Wuhan coronavirus from spreading in the community.

South Korea is also planning to send medical aid items on the flights to Wuhan, including two million protective masks and 100,000 protective goggles.

There's one case of the Wuhan coronavirus in Sri Lanka.

A statement from the health ministry assured residents that local hospitals were prepared to handle any further outbreak. The government is contacting people who may have come into contact with the single case to detect potential contagion.

Eight cases have been confirmed in Taiwan. The latest involves a Taiwanese man in his 50s whose family member was previously confirmed with the coronavirus, according to the Taiwan Centers for Disease Control (CECC).

All residents of Hubei province are banned from entering the self-governing island. Chinese students from other provinces will also be denied entry for two months. The export of face masks is also temporarily suspended to ensure stable supply.

Thailand confirmed a further six cases of Wuhan coronavirus this week, bringing the total number to 14 -- the highest count of confirmed cases outside China.

Of the six new cases, five are from the same family traveling together from Hubei province. Thai airports are now screening all Chinese visitors for symptoms. Thai citizens are also being asked to report anyone who seems to have fallen ill after recently traveling from China.

The UAE confirmed four cases of the coronavirus, the UAE's Ministry of Health and Prevention said in a statement Wednesday.

The four reported cases are all within a single Chinese family from Wuhan, the ministry said.

"The general health situation is not a cause of concern," the statement added.

The United States has confirmed five cases, including one in Washington state, two in California, one in Arizona, and one in Illinois.

The US has raised its travel advisory level and cautioned travelers to reconsider visiting China. It has also ordered the evacuation of all non-emergency personnel and their families from Hubei province.

The first chartered flight, carrying 200 Americans, will land late Tuesday night at Ted Stevens airport in Anchorage, Alaska for a refueling stop, where passengers will get health screenings to ensure they are not experiencing symptoms. Afterward, the plane will land at March Air Reserve Base in Riverside County, California.

Vietnam confirmed two cases of the Wuhan coronavirus in Ho Chi Minh City -- a father and son from Wuhan, according to the state-run Vietnam News Agency (VNA).

The country has set up a rapid response team, and Prime Minister Nguyen Xuan Phuc has instructed ministries to strictly enforce the ban on importing wildlife into the country, according to VNA.