Trump threatens the stability of the world 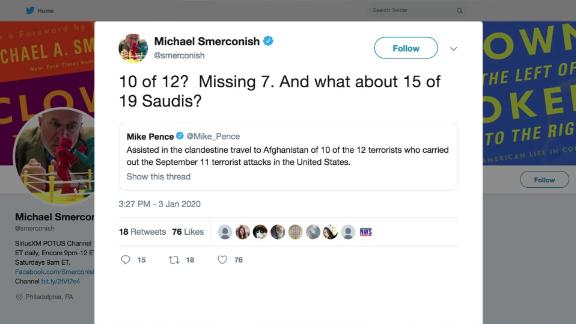 One of the VP's given reasons for Soleimani's killing cites 9/11, but says Peter Bergen, 'pretty much everything in that tweet is not correct.'

Donald Trump resorted to extreme measures by ordering the killing of Iran's most revered military leader — something other presidents have had the opportunity to do and didn't. Iran has promised retaliation. When it comes, it's likely that Iraqis, Iranians and Americans will be killed. Whatever happens, I suspect that the President will take comfort in the fact that he was true to himself.

The fact that our impeached President is still in office, calling the shots and directing attacks that could kick off a war, is deeply unsettling. However, it is reality, and the logical outcome of Trump's leadership style. It is also proof of how he acts under pressure.

Three years into his presidency, we must recognize if not accept that the Trump Way often involves saying and doing things others will not. He plays with the scarier elements of human nature — aggression, tribalism, fearfulness and rage — and is not interested in calling on our higher instincts. Trump has shown little interest in the peace-making and alliance-building other presidents practiced with great benefit for America and the world.

Provoking a military crisis, perhaps even a war, would perfectly fit his long-held view that human beings are "vicious" and "life is a series of battles." On Friday, Trump justified Soleimani's killing by saying the Iranian was "plotting imminent and sinister attacks on American diplomats and military personnel, but we caught him in the act and terminated him." However the president offered no concrete evidence to back his claim and the timing of the lethal strike, which came at a moment of high stress for the beleaguered Trump, is suspicious to say the least.

Two factors may have played a role in Trump's decision to greenlight this risky operation. First, his impeachment just weeks ago must have made him feel more embattled than ever. One Democratic member of Congress, who spoke to me on background after the impeachment vote, told me that some of his congressional colleagues feared that impeachment would only cause Trump to become more reckless.

The second factor might be the retreat of those advisers who were once able to moderate Trump's actions. With the departure from the administration of rational and respected advisers like former Secretary of Defense James Mattis and ex-chief of staff John Kelly, Trump is more free to spray orders in every direction and demand to see results. The outcomes produced by the Trump Way sometimes satisfy the President in the moment, only to bring unexpected and unpleasant consequences later on.

One consequential example: the hold on military aid to Ukraine, which set off alarm bells and ultimately led to Trump's impeachment. The money was held up before the infamous July 25th phone call, when Trump pressured Ukrainian President Volodymyr Zelensky to launch investigations that would benefit him politically.

A month later, Michael Duffey, an official in the Office of Management and Budget sent a damning email to the acting comptroller of the Pentagon, according to unredacted documents reviewed by the national security website Just Security. In it, Duffey provided an unambiguous explanation for the months-long hold. "Clear direction from POTUS to continue to hold," wrote Duffey, explaining a delay that had alarmed officials who knew that Kiev need the aid to defend itself in a war against Russia and its proxies.

As Trump pushed to promote false narratives about Biden and Ukraine, he endangered the lives of Ukrainian military personnel and revealed that concerns for the inevitable collateral damage did not factor into his calculations.

At home, Trump has responded to his impeachment by using the word "coup" and launching into tirades at rallies and on social media. He also accuses his opponents of "treason" and publicly warns of a "civil war." This kind of talk is so inflammatory that I can't recall any modern president ever speaking this way. Trump, however, has cried "treason" at least two dozen times.

No one should argue that previous presidents, especially those who faced impeachment crises, were perfect. However, for all their flaws, Presidents Richard Nixon and Bill Clinton seemed to recognize that the presidency was bigger than them and this understanding drove them to moderate choices and compromises. Trump appears to be informed by an opposite view — that he is more important than his office — and his actions suggest a man who feels so personally threatened by his opponents that he acts as if he's in mortal danger.

At times it even seems that Trump believes he is the embodiment of the country itself and, therefore, any threat to his rule is a danger to the country, which truly patriotic citizens must oppose. This is the "civil war" we are called to imagine when the President uses the term, and it's horrifying to contemplate what might happen if his most rabid supporters felt called to action.

That the unthinkable -- a new war in the Middle East sparked by Soleimani's death -- now seems possible is a testament to the power of the Trump Way. That he is responsible for creating such a fearsome moment is no surprise. Trump achieved fame and power by consistently shocking us with his indecency and recklessness. His political rise was aided by tapping into the spirit of "shock jock" radio personalities who thrill people with their deviance, and it worked for him.

With the power of the Presidency and the freedom to exercise it unfettered by the sober advisers he exhausted, Trump embarked on the Ukraine misadventure that caused his impeachment. It is the Trump Way to take extreme actions that threaten the stability of the US and the world. And as the President seeks re-election, he will likely look for ways to exceed himself and thereby thrill his followers and disorient the rest of us. The killing of Soleimani may be just the beginning.