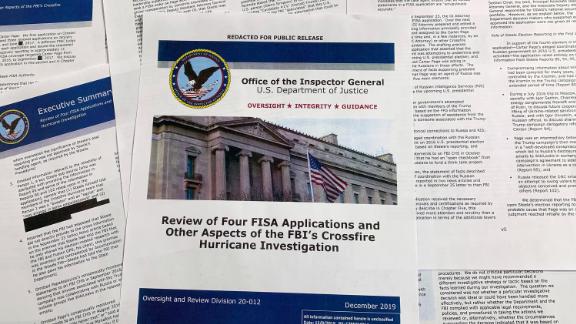 The Justice Department's inspector general found that the FBI properly opened its investigation into Russian election interference but said there were major errors in how the agency conducted the probe.

The former British spy who compiled a controversial dossier on President Donald Trump told investigators it was "ridiculous" to think he was biased against Trump because he had "been friendly" with Ivanka Trump, the President's daughter.

Christopher Steele made the comments to investigators as part of the Justice Department inspector general's report on the FBI's Russia probe. While the name Steele refers to in the report is redacted, a source close to Steele's corporate intelligence agency confirmed the family member is Ivanka Trump.

According to the report, Steele said "if anything he was 'favorably disposed' toward the Trump family before he began his research because he had visited a Trump family member at Trump Tower and 'been friendly' with [the family member] for some years."

He told investigators their relationship was "personal" and said he had once given that person a Scottish family tartan.

CNN has reached out to representatives for Ivanka Trump for comment.

Steele spent two days meeting with representatives of the Justice Department in London to voluntarily cooperate with their probe in June this year and followed up with further conversations via Skype. His corporate intelligence company, Orbis, also provided the inspector general with access to its internal documents and memoranda of its meetings with the FBI since the firm's relationship with the bureau began in 2013.

Orbis had a chance to review 50 pages of the report pertaining to Steele and his firm last week and highlighted numerous mistakes and inaccuracies, in particular with Steele's characterization in some parts of the report as a "confidential human source" rather than as a contractor, according to material prepared by Orbis and seen by CNN.

Monday's report also detailed what the FBI found when it tried to verify information in Steele's dossier on Trump and Russia -- including attempts to verify the existence of video tapes of "alleged unorthodox sexual activity."

Steele's primary source for information in the dossier, for instance, told the FBI he or she may have talked about Trump's alleged sexual activities in "jest" and couldn't confirm whether the tape was real, the report states, quoting the source.

Still, many of the claims by Steele have held up over time, or have proven to be at least partially true, including the fact that there was a concerted Russian operation to attack the 2016 US presidential election.

The Justice Department has brought criminal charges against dozens of Russian hackers and online trolls for allegedly interfering with the election.