GOP throwing sand in the gears of impeachment 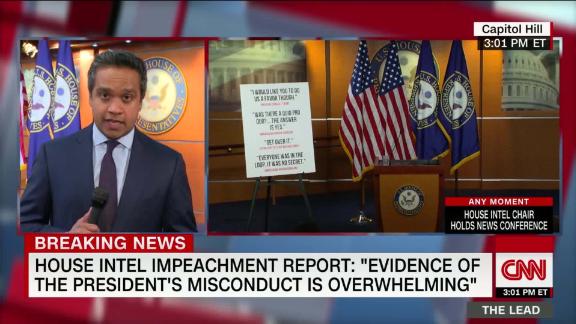 Two congressional committee reports released in the last 24 hours—a "prebuttal" issued by Republicans Monday to head off the scathing impeachment report dropped on Tuesday by Democrats on the House Intelligence Committee--reflect the fundamental political strategies of the two parties.

The Republican report ignores two months of depositions, public testimony and evidence collected by the Intel Committee and spends more than 100 pages saying President Donald Trump didn't do a thing wrong and that impeachment is an attempt to overturn his election.

The Democrats' report relies completely on the information gathered during the Intelligence Committee's inquiry and concludes there is "overwhelming evidence" of abuse of power and obstruction of Congress. (It also teases to more evidence possibly forthcoming by releasing call logs between Rudy Giuliani and others--including his indicted associate Lev Parnas, Rep. Devin Nunes, the top Republican on the Intelligence Committee, the Office of Management and Budget and the White House.)

The two strategies--from the Republicans and the Democrats-- are about to collide again in the House Judiciary Committee.

Republicans will try to confuse with process and the Democrats will try to persuade with evidence. At stake—the power of the presidency and whether Congress has any legitimate oversight authority as a guardrail against presidential abuse of power.

Going forward there is no reason to expect either side to change its approach, nor is there any particular reason to think that any partisans will change their minds. Having said that, the Democrats' historic document outlines allegations that the President abused his power by strong-arming Ukraine in order to help his re-election campaign efforts. So, think Richard Nixon's Watergate scandal, but instead of breaking into the Democratic National Committee's headquarters for purposes of political espionage, this time it's a presidential administration withholding $400 million in congressionally authorized military aid to a vital US ally fighting Russian aggression.

The Democrats' case is that the President allegedly stood at the top of a conspiracy to pressure Ukraine into helping manufacture political dirt on his potential opponent: former Vice President Joe Biden. Their report details the President's drawing government officials into the effort-- including his vice president, chief of staff, attorney general, secretary of state and secretary of energy—and using private channels opened by his personal lawyer, Giuliani.

Importantly, the report expands this beyond the simple and consequential July 25th phone call between President Trump and Ukrainian President Volodymyr Zelensky. Using the testimony of career diplomats and even some Trump supporters, the report paints a picture of a months-long "campaign" to pressure Ukraine, using multiple levers, to launch an investigation of Biden.

But the Intel committee report goes further. It makes the case this is a test of America's democracy. Indeed, the case it lays out suggests that impeachment is the appropriate and necessary mechanism to protect the integrity of the nation. This is particularly resonant when one considers that Trump's call with Zelensky came just one day after Special Counsel Robert Mueller faltered in his testimony on Capitol Hill, declining to charge the President with obstruction of justice in connection with the Trump-Russia probe of the 2016 election. Democrats believe this emboldened President to further abuse the power of his office.

The Intelligence Committee report also lays out evidence of "unprecedented stonewalling" in the obstruction of Congress section. The main players in this political drama, Trump himself, Chief of Staff Mick Mulvaney, Secretary of State Mike Pompeo, Secretary of Energy Rick Perry and Giuliani all were ordered by the President not to testify. While it will take months to sort out in the courts whether they should be compelled to give testimony, the Democrats have concluded that this stonewalling may already be a reason to remove the President from office.

Now we can expect Republicans to continue to shift their argument and their defense, depending on what works that day. Remember, first they wanted the hearings conducted in public and then objected when they were.

Then they said the process was going too slow, only to argue this week that it's going too fast. There was also the argument that there was nothing wrong because the aid was ultimately delivered, and no investigation of Biden was launched. That left out that the Republicans knew that a whistleblower had filed a complaint about the infamous phone call shortly before the aid was miraculously freed up.

Finally, they argued it was Ukraine that was behind the 2016 election interference only to have the Republican-run Senate Intelligence Committee reject that theory completely.

The Republicans will seek to sow confusion at every turn, hoping voters will throw up their hands and give up.

Let's get back to those voters. Support for impeachment grew significantly during the Intel Committee process, but has capped at just under 50%. Partisans from both sides are dug in and there is no reason to believe either report will change minds. Those in the middle likely will take note of the report's conclusion that the President put his interests above the national interest, and this could leave more Americans supporting impeachment as this goes to the full House.

Ultimately, though, the will of the voters will not likely influence the Republican majority in the Senate. They need Trump voters to get re-elected and they are willing to ignore the potential damage to our democracy by turning a blind eye to the President's behavior. And that's the real damage that will be done here. The message to future Presidents will be that there are no longer consequences.

The Trump doctrine going forward will be anything goes, even if you get caught.

One man dead in single vehicle crash in Lafayette

Masks required for all indoors starting Monday at Purdue

Cubs deal Baez, Bryant, Rizzo, and four others ahead of MLB trade deadline