A 'blue zones' diet: Live longer from what you eat 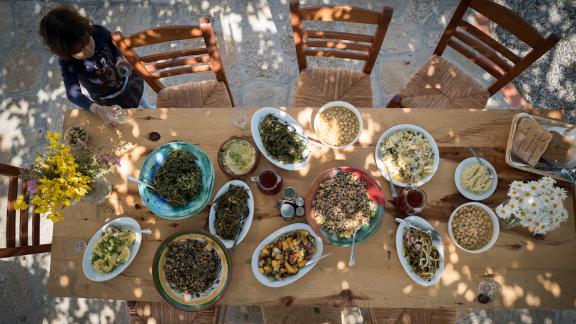 By taking some cues from blue zones, places around the world where people live the longest, healthiest lives, you can live longer. These are some tips.

Want to live a long, healthy life? So do I. That's why for the past 15 years I've explored places around the world where people have done exactly that — places I dubbed "blue zones." And I'm convinced that the foods the people in these areas eat are a big part of their secret.

On the Italian island of Sardinia, I've broken bread in mountain villages that boast some of the highest concentrations of male centenarians on the globe. On the Japanese islands of Okinawa, I've sat down for tea with those who rank among the world's longest living women.

On the Greek island of Ikaria, where it's said people simply "forget to die," I've tucked into a hearty bowl of minestrone with friends who not only live long, healthy lives but also stay sharp to the very end and suffer the world's lowest rates of dementia. On Costa Rica's Nicoya Peninsula, I've started the day with tortillas, beans and pico de gallo among country folk who are more likely to reach a healthy 90 years old than anyone else on the planet.

And in and around Loma Linda, California, I've been invited to dinner with members of a thriving Seventh-day Adventist community whose vegetarian diet has helped them live up to a decade longer than other Americans.

For most of their lives, the world's super-agers have nourished their bodies with whole, plant-based foods, such as leafy vegetables, tubers, nuts, beans and whole grains. And they ate meat fewer than five times monthly.

It may not come as a surprise to learn that a plant-based lifestyle underpins the world's longevity diet, but how those who eat this way manage to stay true to the diet is probably a bigger secret for the rest of us to learn.

Next month, after the holidays, most of us will resolve to eat healthier. But by January 17, most of us will be back to our old habits -- that's according to data from Strava, a social network for athletes, based on more than 108 million usage entries. That's because diets don't work for the vast majority of people for more than about seven months. If you want to live a long, healthy life, the key is to do the right things — and avoid the wrong things — for decades, not just a few months. Because when it comes to longevity, there's no short-term fix.

People in blue zones have been eating the "right" foods because the right foods -- beans, grains and garden vegetables -- were cheapest and most accessible. Their kitchens were set up to cook them quickly and they had time-honored recipes to make simple peasant food taste delicious. Finally, their communities gathered around this food: They sat down at the table with people who ate the same way. They weren't surrounded by people who grilled burgers and ate cheese puffs.

A healthy diet was just one part of a mutually supportive web of factors promoting longevity in the blue zones. People also benefited from having a circle of lifelong friends, a clear sense of purpose, an environment that nudged them into constant movement, and daily rituals that mitigated stress. Their communities were built for people, not cars. Every visit to a friend's house, the market or workplace occasioned a walk.

So, what might their nutrition successes mean for the rest of us?

Potentially, a lot. For more than a decade now, I've been applying lessons from the blue zones to improve the health and well-being of communities across the US. With a full-time team of 120 people, I help American communities to become Blue Zones Project communities, and eating well and access to healthy food is a big part of that effort.

In our pilot city of Albert Lea, Minnesota, residents added 2.9 years to their lifespans and saved millions in healthcare costs. In three beach cities in Southern California, there was a 50% drop in childhood obesity rates. And in Fort Worth, Texas, the city went from one of the unhealthiest locations in the country to one of the healthiest.

During a visit there this summer, I persuaded more than 100 mostly middle-aged men and women gathered in an auditorium to take part in an experiment. We divided them into groups called "moais" -- an Okinawan word for life-long circle of friends -- based on their common interests, values, schedules and where they lived. Then we gave them recipes from the blue zones, and asked them to get together at least five times during the next three months for plant-based potluck dinners.

The results were encouraging. Based on an online questionnaire taken before and after the experiment, 100% of those who took part reported a significant bump in their well-being. Seventeen percent lost weight; 67% said they'd made more friends. One 56-year-old woman even reported losing 37 pounds, adding, "I discovered that I have nice legs." According to the online True Vitality Test that calculates your life expectancy and was created in collaboration with the University of Minnesota, participants added an average of 15 months to their life expectancy as a result of the changes they made.

If they can do it, so can you. As they say in Greece's Ikaria, where people greet one another on the street with the saying, "Akentannos" — I'll see you when you're 100! — the most important step on your journey to a healthy 100 years might be to start eating like they do in the blue zones.