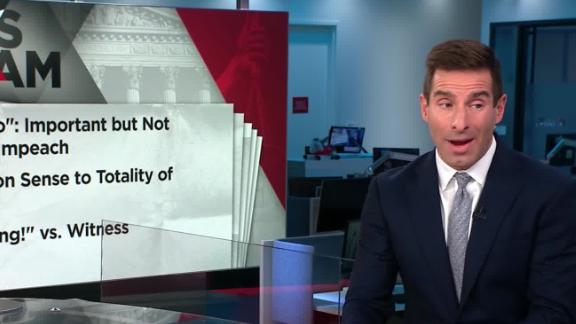 This story was originally published in the November 25 edition of CNN's Meanwhile in America, the daily email about US politics for global readers. Sign up here to receive it every weekday morning.

These are strange times in America. The Republican Party once wouldn't stop boasting that it won the Cold War. Now, it embraces a Kremlin-hatched conspiracy theory that Ukraine meddled in the 2016 election -- despite US spy agencies' conclusion that Russia itself is to blame.

Evidence abounds to show that the US president demanded a quid pro quo with Ukraine to investigate this very conspiracy theory, and a political rival. Yet his supporters deny what is not even hiding in plain sight.

One Republican big beast, John Bolton, could have tantalizing details about Ukraine. But his new crusade for justice is a trivial one: The sacked national security advisor claims the White House hijacked his Twitter account.

And it has fallen to immigrants to warn US lawmakers about the peril this scandal poses to American values, as they testify in their role of senior officials before an impeachment probe. (The rest of the nation is on an entirely different planet from Washington, DC, with voters more worried about lost industrial jobs, how to pay for healthcare and mountains of student debt.)

Something else is odd: The Democratic race for the White House should be dominating the news by now, since it could produce America's 46th president. But its gang of 70-somethings and political wannabes seem increasingly like an afterthought. On Sunday, they got a new rival: Michael Bloomberg, a billionaire who thinks the only thing missing in a race anchored by hostility to billionaires is ... another billionaire.

Meanwhile in Washington, Trump has put on his commander in chief hat to undermine top military brass, as they try to hold soldiers accountable for infringing decency and discipline. He also says he's standing with Hong Kong, where demonstrators with US flags demand democracy -- but is quick to remind everyone he's actually siding with their authoritarian leader Xi Jinping.

So if you've begun to feel that everything's a bit upside down -- well, it is.