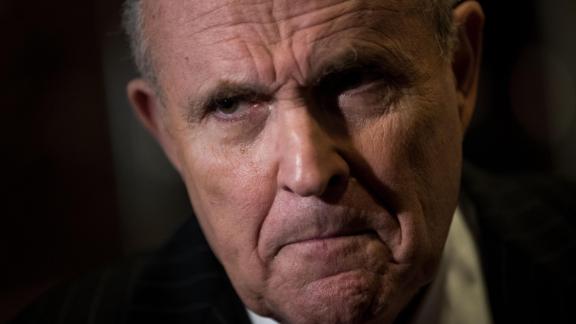 Nearly every witness in the impeachment hearings so far has expressed frustration with Rudy Giuliani's role in Ukrainian diplomacy. President Trump's personal attorney is not cooperating with the impeachment inquiry, but could testify before a Senate committee.

House Democrats wrapped up one of the most monumental weeks on Capitol Hill in decades on Thursday before leaving town for the Thanksgiving recess.

Read full wrap up of the day's testimony here:

Former National Security Council Russia expert Fiona Hill appeared Thursday and said that she, too, has been watching the impeachment hearings. And she told Congress that after everything that's come out, it wasn't until Wednesday, while watching US Ambassador to the EU Gordon Sondland testify about his efforts to influence Ukraine policy on President Donald Trump's behalf, that it dawned on her what this whole scandal has been about.

Her elegant phrase might have been an "ah-ha" moment for anyone who has been hanging on every moment of these hearings. An errand is something small that helps a person. A policy is executed on everyone's behalf for the entire country. Mixing the two puts the needs of a person, even if it is the President, over the needs of the country, which the government is supposed to serve. An errand exactly describes the essence of what happened: Trump tried to use the levers of the US government for his own political benefit. Read more on her extraordinary testimony here.

Hill testified that she had been extremely angry with Sondland for cutting her and others out of Ukraine policy, and she made sure he knew it. He described her at one meeting shaking with fury about the lack of coordination within the White House when it came to the Ukraine negotiations.

"I had not put my finger on that at the moment, but I was irritated with him and angry with him that he wasn't fully coordinating. And I did say to him, 'Ambassador Sondland, Gordon, I think this is all going to blow up.' And here we are."

Dismantling a "fictional narrative" and so much more

Hill did several very important things with her testimony. Go through the whole day here.

Remember Trump's repeated expressions of doubt about the intelligence community's findings about Russian election interference in 2016? Hill, a Russia expert and notable critic of Vladimir Putin, also came to the hearing on a mission to destroy the idea, pushed by Republicans and Trump, that Ukraine tried to take Trump down in 2016.

"Based on questions and statements I have heard, some of you on this committee appear to believe that Russia and its security services did not conduct a campaign against our country -- and that perhaps, somehow, for some reason, Ukraine did," Hill testified.

Then she dropped the hammer: "This is a fictional narrative that has been perpetrated and propagated by the Russian security services themselves."

Hill talked about her own concerns regarding Ukraine policy, particularly after the pivotal July 10 meeting where Sondland talked about deliverables in front of Ukrainians.

She also made a really important point: Lots of world leaders and ambassadors dismissed and ridiculed Trump before he was elected. But it did not lead to demonstrable changes in US policy toward all those countries. It did for Ukraine.

Hill acted as a sort of proxy for John Bolton, her former boss and the former national security adviser. She again explained how Trump's lawyer Rudy Giuliani was running an unofficial Ukraine policy for Trump, and Bolton -- the top national security official in the White House -- was sometimes out of the loop.

She got on the record that Bolton thought Sondland's efforts on Ukraine were a sort of "drug deal" and she popularized the idea that Bolton felt Rudy Giuliani was a kind of "hand grenade" that would blow everyone up. Hill explained both of those phrases dead-pan in her British coal miner daughter's accent (she also shared her immigrant story, which has been a theme in these hearings).

Vindman was the Army officer and Soviet emigré who testified on Tuesday. Hill was asked about testimony from her successor on the National Security Council, Tim Morrison, that she had concerns about Alexander Vindman. No, she corrected. She said it was clear that Ukraine policy was taking a US domestic political turn. And Vindman, she said, might not have the hard political edge to work as a national security expert in such a political environment.

Next to Hill at the witness table Thursday was David Holmes, a policy aide at the US embassy in Ukraine. He talked about Sondland's loud conversation with Trump at a restaurant in Kiev, and overhearing Trump ask about whether Zelensky would undertake the investigations the day after Trump and Zelensky had their phone call. (Reminder: that was a huge security breach.)

But Holmes also wove into his long opening statement a very compelling story about how Ukraine was at an important crossroads and why US support for Ukrainian President Volodymyr Zelensky is so important -- as a counterweight to Russian influence. This is why national security professionals like him and Fiona Hill were so invested in this whole affair, not because of a hidden partisan effort to undermine Trump.

Both Hill and Holmes said they knew that Trump's desire to investigate Burisma meant he wanted an investigation of the Bidens. That seems obvious now after the release of the transcript of Trump's July 25 phone call with Zelensky, in which he equated the two things. Here's the annotated White House transcript.

Two key officials -- Sondland and former special envoy for Ukraine Kurt Volker -- testified they didn't put it together at the time. CNN's Marshall Cohen gathered all the ways witnesses responded when asked if they understood that investigating Burisma was code for investigating the Bidens.

Hill: "It was very apparent."

Morrison (Hill's successor at the NSC): "I googled it."

Sondland: "I kinda figured it out by July-August, but didn't see Giuliani's TV hits or tweets."

Volker: "No, never until the scandal broke."

Important to note here that the two people in charge of US-Ukraine policy were those who claim not to know what has since become very clear. And both said they regretted not making the connection and, if they had, would have raised concerns of their own.

Hill was asked about Sondland's ignorance and said she found it, "not credible at all."

Thursday's hearings may have been the final bit of public witness testimony in Trump's impeachment. Here's what each side offered as closing arguments.

Republicans: It's a show trial

NUNES: What you see in this room over the past two weeks is a show trial. The planned result of three years of political operations and dirty tricks. Campaigns waged against this President. And like any good show trial, the verdict was decided before the trial ever began. ... Democrats only needed a pretext, when their Russian dossiers and investigations failed to do the job, they moved to Plan B, the Ukraine hoax.

Rep. Adam Schiff, the top Democrat on the Intelligence Committee, said Trump's Ukraine scandal is far worse than Watergate. He then argued that then, Republicans turned on their President, whereas now they are protecting him.

Were any minds changed?

If there was a Republican who could potentially be persuaded to turn on Trump, it might be Rep. Will Hurd, the Trump-critical Texan who is leaving office rather than fight for his border seat. On Thursday, he did not sound convinced by the testimony.

HURD: An impeachable offense should be compelling, overwhelmingly clear and unambiguous and it's not something to be rushed or taken lightly. I've not heard evidence proving the President committed bribery or extortion. I also reject the notion that holding this view means supporting all the foreign policy choices we have been hearing about over the last few weeks.

Democrats have an important choice now that the Intelligence Committee's impeachment hearings have seemingly concluded. They can pursue testimony and documents that the White House is blocking, or take what they've seen and draw up articles of impeachment.

"They keep taking it to court and no, we're not going to wait until the courts decide," Speaker Nancy Pelosi said Thursday. "That might be information that's available to the Senate in terms of how far we go and when we go, but we can't wait for that because again it's a technique. It's obstruction of justice, obstruction of Congress, so we cannot let their further obstruction of Congress be an impediment to our honoring our oath of office."

"We cannot be at the mercy of the courts," she said.

That leaves Democrats in the position of voting to impeach Trump without hearing from his top aides or seeing key documents -- which would speed things up.

And Republicans are working with the White House to prepare for the likely Senate impeachment trial, coalescing around the idea that allowing Democrats to lay out their evidence may be the best course of action to protect the President. They're aiming to give Democrats two weeks to do it.

CNN's Capitol Hill team reports that the House could vote to impeach Trump by Christmas Day.

The House Intelligence Committee, along with two other panels, are writing a report detailing their findings, which is expected to serve as the basis for articles of impeachment that the House Judiciary Committee will consider.

What could the articles of impeachment include?

Democrats say they are still debating the size and scope of the articles, which are likely to focus on abuse of power, obstruction of justice, obstruction of Congress and bribery.

Up in the air with Gordon Sondland

A CNN reporter got on Gordon Sondland's flight from Dulles to Brussels.

After a full day of testimony, he slept through dinner and awoke as the aircraft made its final approach into Brussels Thursday morning, just missing Secretary of State Mike Pompeo who had been in town until late Wednesday for a NATO summit.

On the Impeachment Watch podcast

What are we doing here?

The President has invited foreign powers to interfere in the US presidential election. Democrats want to impeach him for it. It is a crossroads for the American system of government as the President tries to change what's acceptable for US politicians. This newsletter will focus on this consequential moment in US history.

Keep track of congressional action with CNN's Impeachment Tracker. See a timeline of events here. And get your full refresher on who's who in this drama here.