How Republicans' star impeachment witness turned on them 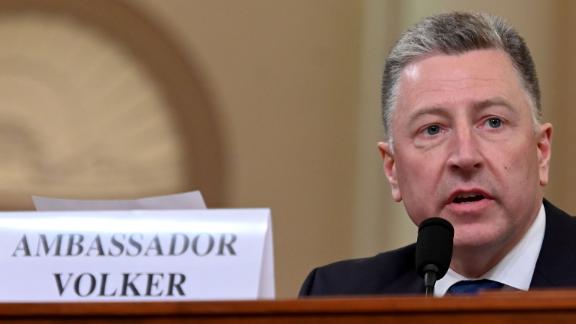 Former US special envoy Kurt Volker said he did not know of any linkage between the hold on security assistance and Ukraine pursuing investigations of Trump's political rivals.

Former US Special Envoy to Ukraine Kurt Volker was widely seen as Republicans' impeachment ace in the hole. On Tuesday on Capitol Hill, it didn't work out that way.

Volker's opening statement repeatedly acknowledged that statements he made during his October 3 closed-door deposition in front of House investigators had been not fully informed. And that, in the six weeks between that first appearance and his public appearance before the House Intelligence Committee on Tuesday, much had changed that forced him to also revise and extend his original contentions.

Among the key changes Volker made to his original testimony:

*He acknowledged that he lacked a full understanding of the fact that many people involved in the Trump administration's push for an investigation into an Ukrainian natural gas company on whose board Joe Biden's son, Hunter sat, viewed that pressure campaign as synonymous with a call to investigate the Bidens.

"I now understand that others saw the idea of investigating possible corruption involving the Ukrainian company, 'Burisma' as equivalent to investigating former Vice President Biden," said Volker. "I saw them as very different. The former being appropriate and unremarkable, the latter being unacceptable."

*Volker initially said that investigations into Trump's conspiracy theories and the release of almost $400 million in military aid for Ukraine were not mentioned in a July 10 meeting at the White House. But on Tuesday, Volker said he now knows that the investigations were mentioned.

*Volker said in his October testimony that any conversations with the Ukrainians about making an announcement on the opening of an investigation into the Bidens had ended in August. But on Tuesday, Volker acknowledged that US Ambassador to the European Union Gordon Sondland had told a top Ukrainian official on September 1 that he believed the military aid was tied to the announcement of an investigation.

Those are big changes, with big implications.

No longer is Volker claiming -- as he did in his original testimony -- that there were no efforts on the part of the Americans to force the Ukrainians to announce an investigation had ended in August, long before the September 11 decision was made to release the hold on nearly $400 million in military aid to Ukraine.

No longer is Volker claiming that the idea of investigations -- into the Bidens and into a debunked conspiracy theory that Ukraine somehow had meddled in the 2016 election to help Hillary Clinton and might be in possession of the hacked Democratic National Committee server -- never came up in a White House meeting two weeks before the July 25 call between Trump and Ukrainian President Volodymyr Zelensky.

No longer is Volker claiming that no one thought the push by some members of the Trump administration to investigate Burisma had anything to do with investigating a potential 2020 presidential challenger to Trump.

All of which is a big change from what Volker said last month -- and what Republicans had to expect he would say.

And then there was what Volker had to say about Trump's personal lawyer Rudy Giuliani -- and his negative impact on Trump's view of Ukraine. As Volker said Tuesday:

"It was clear to me that despite the positive news and recommendations being conveyed by this official delegation about the new President, President Trump had a deeply rooted negative view on Ukraine rooted in the past. He was clearly receiving other information from other sources, including Mayor Giuliani, that was more negative, causing him to retain this negative view."

Volker didn't just help the Democratic case. He said he had no problem with Ukrainians looking into possible Ukrainian efforts to influence the 2016 American election -- even though he acknowledged he didn't believe that happened. He also told Ohio Rep. Mike Turner that the Ukrainians never made clear to him that they believed there was a quid pro quo connecting an announcement of an investigation into the Bidens and the release of the military aid. (Although, as The Washington Post's Aaron Blake has noted, that is sort of hard to believe.)

But taken as a whole, Volker was much, much less than Republicans had hoped he would be. Instead of disrupting the narrative Democrats are building around the Ukraine pressure campaign, Volker bolstered it.