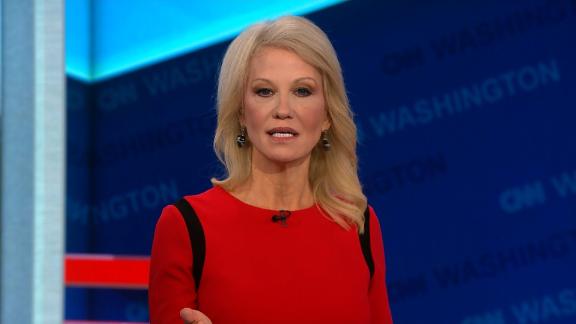 Kellyanne Conway, Counselor to the President, argued that there was "nothing new" in the first public hearing of the impeachment inquiry — despite the top US diplomat in Ukraine revealing a previously unknown conversation involving President Donald Trump. CNN's John King fact-checks Conway.

Counselor to the President Kellyanne Conway argued Thursday that there was "nothing new" in the first public hearing of the impeachment inquiry -- despite the top US diplomat in Ukraine revealing a previously unknown conversation involving President Donald Trump that more directly ties the President to the scandal.

She dismissed top US diplomat in Ukraine Bill Taylor's sworn testimony about a conversation Trump had after his infamous July phone call with the Ukrainian President, telling CNN that it would be regarded in a court of law as "hearsay."

"In a real court of law, we'd not be referring to something as evidence that is, 'oh, someone on my staff recalled overhearing a conversation between someone else and the President where they think they heard the President use the word 'investigations.' This is not what due process and the rule of law in our great democracy allows," Conway said Thursday during an interview with CNN's Wolf Blitzer.

She added, "We certainly shouldn't have a lower standard for the impeachment and removal of a democratically elected president."

Conway, who said she briefed the President about the hearing, told CNN that Trump reacted "pretty well" to Wednesday's public hearing because "there was nothing new."

She raised the point that the two witnesses -- Taylor and Deputy Assistant Secretary of State George Kent -- had neither spoken with nor met Trump.

During Wednesday's hearing, Taylor testified that his aide informed him of a phone conversation Trump had with Gordon Sondland, the EU ambassador, on July 26, a day after Trump's phone call with Ukrainian President Volodymyr Zelensky.

Taylor's aide, who was accompanying Sondland to meetings in Kiev with Ukrainian officials, could overhear Trump asking Sondland about "the investigations," Taylor testified.

After the call, Sondland told the aide that Trump's interest in Ukraine was the "investigations of Biden," and that he cared more about an investigation of former Vice President Joe Biden than he did about Ukraine.

Taylor said he had not been aware of this information before his closed door deposition with impeachment investigators on October 22.

The testimony provided new details about the President's personal involvement in the push for Ukraine to open investigations into his political rivals as House Democrats began public impeachment hearings that could lead to the House voting to impeach a president for just the third time in US history.

Conway was also asked about her husband, conservative lawyer George Conway, and his allegation on MSNBC that Trump was "using the power of the presidency -- in its most unchecked area, foreign affairs -- to advance his own personal interests as opposed to the country's."

"That is his opinion," Conway said, adding later, "I respectfully disagree."

She took issue with the relevance of her marriage as a loyal Trump aide to a vocal Trump critic.

"Honestly, where is the shame?" Conway said.

Schools close through weekend due to flu outbreak

McCutcheon and Mayflower Mill schools given all clear after brief lockout