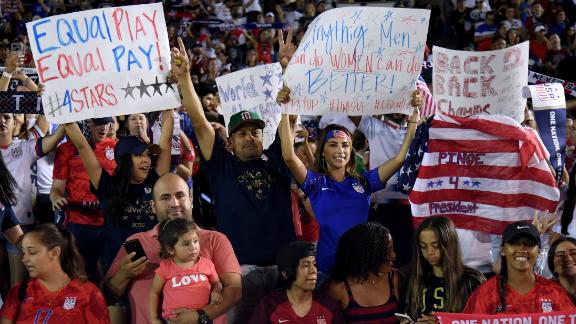 She's one of the most talented soccer players on the planet -- but Sam Kerr is now gearing up to take on a brave new world after signing for English club Chelsea.

The Australian star has agreed a two-and-a-half year deal with the London club and will be available for selection from January. She will arrive at the club on December 27.

Kerr, the all-time leading goalscorer in both the Australian and American leagues, led her country to the last 16 of the 2019 World Cup, scoring five goals along the way.

The signing is a huge coup for Chelsea, which did not qualify for this season's Champions League, but currently sits top of the English Women's Super League.

"The WSL is the best league in Europe," Kerr told the club's official website. "I want team success and I don't want it to come easy. I feel Chelsea have been building something special over the years and I want to be a part of that -- I want to lift some trophies.'

Kerr, 26, has already enjoyed huge success both in Australia and abroad. She's the all-time leading goalscorer in the W-League with 70 and hit another 69 in the US while playing for Western New York Flash, Sky Blue FC and Chicago Red Stars. She has also picked up three golden boots and two MVP awards.

Most recently Kerr has been playing for Perth Glory between October-April in Australia, and for Chicago in the National Women's Soccer League in the US from April to September.

The forward had been linked with a whole host of top clubs before Chelsea announced the deal on Wednesday.

"Sam has proved time and time again in the NWSL that she is a prolific goalscorer," Chelsea coach Emma Hayes told the club's official website.

"She's won the golden boot many times and she's a player that can make things happen, but she's also a fantastic team player.

"The fact she chose Chelsea when she could have gone to any club in the world is a testament to the players and the staff here because she saw this is the best place for her to grow and take the next step in her career. That's a wonderful compliment to us all."

No one knew why the kids in 2 Amish families were dying suddenly. Now researchers have some answers