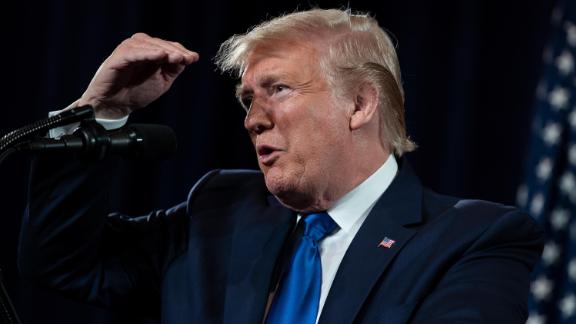 President Donald Trump is set to attend a major college football game between the University of Alabama and Louisiana State University, marking his third time attending a major sporting event in two weeks.

President Donald Trump is set to attend a major college football game between the University of Alabama and Louisiana State University on Saturday, marking his third time attending a major sporting event in two weeks.

The game will be held in Tuscaloosa, Alabama -- a state Trump won handily in 2016. There, the President may find a friendlier crowd than the ones greeting him at earlier events in Washington and his hometown of New York City.

The President typically feeds off the energy of large crowds, but as Trump sat ringside at an Ultimate Fighting Championship match last week, a mix of boos and cheers echoed throughout Madison Square Garden.

Trump, however, said the atmosphere was akin to that of a Trump rally.

And at Game Five of the Major League Baseball World Series late last month, Trump was met with booming jeers across Nationals Park when his image was beamed onto the big screen.

Surrounded by his Republican allies in a box suite, Trump was said not to have noticed.

It's not clear what reception waits Trump inside the Alabama-LSU game, but at least one disruption is planned outside the stands: a helium-filled 'Baby Trump' balloon is expected to be floating around town.

The University of Alabama student government found itself at the center of controversy earlier this week after warning students they'd lose their stadium seating privileges if there was "disruptive behavior." However, the group has walked back the statement.

The White House has not offered an explanation for Trump's unexpected visit, and one University of Alabama official said the team did not extend the invitation.

The President is not expected to go onto the field ahead of the start of the game, but he will be recognized at some point during the game, according to a person familiar with the plans.

Trump has not indicated that he's much of a college football fan in the past, having been spotted at the golf course on major college game days. However, he did attend the College Football Playoff championship game in January 2018, when Alabama defeated the University of Georgia.

The college game day visit coincides with several notable national political moves in the Yellowhammer state. News broke on Thursday that former New York City Mayor Michael Bloomberg was expected to fill out paperwork to run in the Democratic presidential primary in Alabama. In addition, former Attorney General Jeff Sessions announced that he'd be running for his old seat representing Alabama in the Senate.

So far, Trump has declined to endorse Sessions. Asked if he has forgiven Sessions for recusing himself from the Russia investigation, Trump told reporters Friday, "I don't even think about it."