What 2,677 pages of testimony reveal about Trump's Ukraine scandal 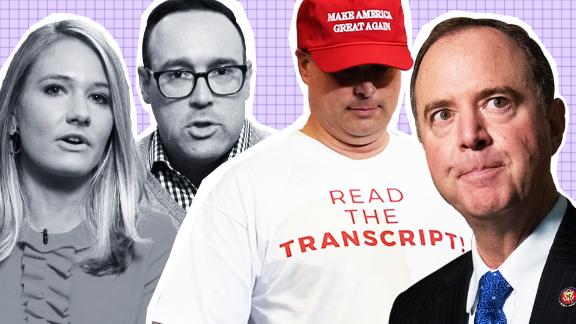 In this weekend edition of The Point, Chris Cillizza and CNN national security reporter Kylie Atwood discuss the House Intelligence Committee's release of transcripts from the impeachment inquiry into President Donald Trump.

To President Donald Trump, the whole flap with Ukraine is over a "perfect" phone call.

"It's based on a single phone call of congratulations to the President of Ukraine, which they fraudulently mischaracterized to sound absolutely horrible," Trump said a few weeks ago of his July 25 call with the Ukrainian President cited by a whistleblower complaint.

But a review of more than 2,600 pages of transcripts released this week from eight witnesses who have testified in the House impeachment inquiry over the past six weeks shows how controversy over Trump's Ukraine policy had been brewing inside the US government for months. It roiled efforts to bolster a key strategic alliance after Trump enlisted his own personal attorney to work outside normal diplomatic channels in an apparent effort to bolster his reelection chances.

The testimony details how top US officials were alarmed that Trump had outsourced Ukraine policy to his attorney, Rudy Giuliani, who had pushed top Ukraine officials to publicly announce an investigation into the Bidens and to pursue a conspiracy theory that Ukraine interfered in the 2016 elections to help Democrats. Giuliani's efforts, with support from the President, led to the ouster of America's top diplomat in Ukraine, who stood in his way, while enlisting emissaries who have since been indicted.

Moreover, the testimony shows a President detached from the integral role Ukraine plays in US policy against Russia -- but also animated in his agitation toward Ukraine. And the testimony of at least one witness links Trump to the decision to withhold nearly $400 million in security aid for Ukraine until that country announced it would pursue the investigations into his political rivals.

Yet, there still remains one unanswered question: Why was the aid delayed by White House? While there's ample circumstantial evidence pointing the finger at the President's desire to push Ukraine to publicly announce a probe of his political rivals first, the White House has blocked key figures -- like acting chief of staff Mick Mulvaney -- from testifying, and they could shed more light on the decision to withhold the aid.

"It actually came as a direction from the Chief of Staff's office," said Fiona Hill, who was a top Russia adviser at the White House.

Trump has continued to rail on Twitter and in public on his phone call with Ukrainian President Volodymyr Zelensky, calling it a "perfect" call. But the Democrats' case now goes far beyond that conversation.

Hill, who was the former top White House Russia adviser, and the National Security Council's Ukraine expert, Lt. Col. Alexander Vindman, testified that the Ukrainians were told on July 10 that the White House meeting with Trump they were seeking was conditioned on opening investigations into the President's rivals.

The message to the Ukrainians was delivered by US Ambassador to the European Union Gordon Sondland, the officials testified, who said he was directed to do so Mulvaney. White House officials raised serious objections to Sondland, calling into question Sondland's own sworn testimony that then-national security adviser John Bolton "never" shared "any misgivings" with him.

Text messages turned over to House impeachment investigators show how the conversation with the Ukrainians about publicly announcing an investigation continued for several weeks after the July 25 call. The texts show then-US special envoy Kurt Volker and Sondland encouraging Ukraine to include Burisma -- a Ukrainian natural gas company where Hunter Biden sat on the board of directors.-- and the 2016 election in the public statement at the request of Giuliani, though the matter was eventually dropped.

But on September 1, after Ukraine had learned that the US had frozen $400 million in security aid, Sondland told lawmakers — in a revision to his original testimony this week — that he told Ukrainian officials the aid wouldn't be released without the investigations.

Bill Taylor, the top US diplomat in Ukraine, testified Sondland said Trump told him "everything" — meaning the aid money and a meeting — was conditioned on Ukraine publicly announcing an investigation.

But Sondland did not testify that Trump told him that, only that he "presumed" the aid was linked to the investigations. He contended that he couldn't recall precisely how he learned the two were linked.

The power of Trump's personal attorney

Giuliani has tried to make the case that his only role in Ukraine was defending his client -- Trump -- and fending off attacks against him.

But that's not what senior US officials were told -- or how the Ukrainians viewed him. Time and again, Trump made clear that to deal with Ukraine policy, they'd have to deal with Giuliani first, something that hamstrung their efforts to with their key ally, which is battling Russian aggression and desperately needed US help.

It also caused serious concerns among top diplomats as Giuliani was pushing for Ukraine to announce investigations that could help the President politically. And after Giuliani successfully helped to drive out US Ambassador to the Ukraine Marie Yovanovitch from the post, multiple efforts to push Secretary of State Mike Pompeo to offer a statement of support on her behalf went unanswered.

In a conversation between senior State official George Kent, who was in charge of Ukraine policy, and Volker, Kent says Volker made clear to him that they would deal directly with Giuliani "because it was clear that the former mayor had influence on the President in terms of the way the president thought of Ukraine."

To Sondland, Trump was even more blunt: "He just keep saying: 'Talk to Rudy, talk to Rudy.'"

Sondland then testified that Giuliani's demands continued to get more "insidious" from May 23 until later when he "became aware that there might be a link between the White House visit and aid to the Ukraine that was being held up when I couldn't get a straight answer as to why the aid was being held up."

And he added that the Ukrainians were confused by Giuliani's role and concerned that "it could be undermining the consensus policy."

"It wasn't until that call that it became, that he was pulled into kind of an official role," Vindman added, referring to the July call where Trump urged the Ukrainian President to work with Zelensky.

Yovanovitch and others described a series of "lies" pushed by Giuliani to smear her reputation and make her appear disloyal to the President, but they also contended there was little that senior State Department officials -- like Pompeo -- were willing to do about his efforts.

"Did anyone at the State Department try to stop those efforts?" Yovanovitch was asked. She responded: "I don't think so, I don't (think) they felt they could."

Pompeo "rolled his eyes" when discussing Giuliani and said: "Yes, it's something we have to deal with," according to Sondland's testimony.

Michael McKinley, a former senior adviser to Pompeo who has worked for 37 years in the Foreign Service, made clear to House investigators that State Department officials were being used "in a way that certainly didn't fit into any past example we can think of," referring to the efforts to target a political rival through investigations by a foreign country.

Kent was supposed to be in charge of Ukraine policy at the State Department, but he was sidelined. And he was alarmed at what he saw.

"I wrote a note to the file saying that I had concerns that there was an effort to initiate politically motivated prosecutions that were injurious to the rule of law, both in Ukraine and the U.S," Kent testified.

Taylor called it an "irregular, informal channel of U.S. policy making with respect to Ukraine," referring to the efforts led by Volker, Sondland, Giuliani and Energy Secretary Rick Perry.

"Although this irregular channel was well connected in Washington, it operated mostly outside of official diplomatic channels," he said.

The President's suspicion of Ukraine dates back to the 2016 election, due to baseless conspiracy theories that it was Ukraine, not Russia, that interfered in the US election.

That long-held distrust of Ukraine fueled Trump's view of the conspiracy theories promoted by Giuliani and in conservative media that year, which prompted him to brush off dealing with Ukraine and telling officials to speak with Giuliani about Ukraine.

"They are all corrupt, they are all terrible people," Volker recalled Trump saying at a May 23 meeting where they encouraged Trump to set up an Oval Office meeting with Zelensky. "I don't want to spend any time with that."

Trump's attitude toward Ukraine contributed to Giuliani's ability to have influence over US policy in Ukraine, because Trump administration officials believed they needed to convince Giuliani to sway the President.

"It started as talk to Rudy," Sondland testified.

But years before Ukraine was thrust into the public sphere as a scandal threatening the President with impeachment, Trump's views on Ukraine prompted concern inside the Trump administration.

Trump also seized on the conspiracy that Ukraine, not Russia, interfered in the 2016 election, based on the unproven claim that the Democratic National Committee server was in Ukraine. Trump alluded to the conspiracy theory on the July 25 call with Zelensky: "The server, they say Ukraine has it," he said.

Hill explained how there was an effort to convince Trump it was a "debunked" conspiracy theory. "We spent a lot of time" with Tom Bossert, Trump's former homeland security adviser, former national security adviser H.R. McMaster and others, Hill said, "trying to refute this one in the first year of the administration."

"Tom and others who were working on cybersecurity laid out to the President the facts about the interference," she said. "I can't say any more than that."

The release of the transcripts has severely complicated Republicans' defense of Trump. That's because in the private depositions, one witness after another knocked down some of the core arguments that Trump and his allies have been making.

The witnesses have panned Trump's core allegations that Biden corruptly pressured Ukrainian officials to protect his son Hunter, who was on the board of Burisma, and that the US ambassador to Ukraine was part of the so-called "deep state" against Trump. Some of those allegations originated from former Ukrainian Prosecutor General Yuriy Lutsenko, who was described by Volker as "not credible" and by Kent as someone who was out for "revenge."

The narrative Giuliani had been pushing was essentially a sweeping "campaign of lies," Kurt also said.

So far, the inquiry has uncovered multiple clear examples of the Trump-Ukraine quid pro quo, where a White House invitation and military aid were withheld while Trump's handpicked diplomats pressured Ukraine to announce investigations into his political rivals. It was established in Sondland's testimony and text messages from Volker — who both pressed Ukrainian officials to announce the investigations. Other key players, including Taylor, the top Russia and Europe adviser on the National Security Council Tim Morrison and Vindman, also testified that they understood there was a quid pro quo after listening to Trump's call with Zelensky or discussing the matter with Sondland.

If Trump wants to continue claiming "no quid pro quo," Democrats appear to have the goods to prove him wrong. Some congressional Republicans have suggested acknowledging a quid pro quo, but staking out the position that it did not rise to the level of an impeachable offense.