Does Bolton have a bombshell, and other impeachment news 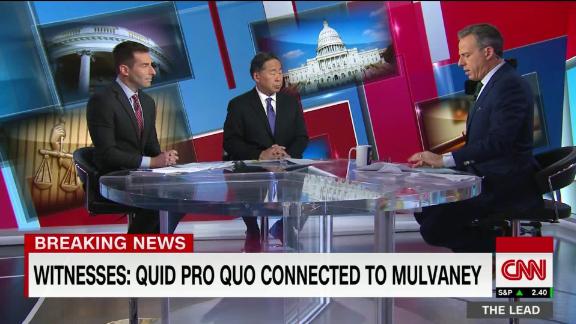 A version of this story appears in CNN's Impeachment Watch newsletter. To get it in your inbox, sign up for free here.

When it looked like House impeachment investigators might proceed without him, former national security adviser John Bolton, somewhat jilted, demanded that they try harder. Here's what happened, along with other news Friday wrapping up a crazy busy impeachment inquiry week.

His lawyer wrote the House general counsel essentially asking him not to give up on the court case engineered to make Bolton talk.

Bolton, according to his lawyer, has some information you might be interested in. He attended "many relevant meetings and conversations that have not yet been discussed in the testimonies thus far."

Bolton is all over the testimony, in particular, of former White House Russia adviser Fiona Hill, who quoted him directly as describing the shadow foreign policy of US Ambassador to the European Union Gordon Sondland and acting White House chief of staff Mick Mulvaney as a "drug deal."

My theory: Bolton is a neocon true believer in a strong executive, so it makes sense he wouldn't, on his own, want to cross a White House claim of executive privilege and cooperate with House impeachment investigators.

But who knows what he will ultimately say. And it's a good bet that someone with Bolton's history of supporting executive power won't think President Donald Trump acted inappropriately even if he's willing to help take down others in the administration.

Breaking -- The Wall Street Journal reports that Rudy Giuliani's associates Lev Parnas and Igor Fruman, who have since been charged with violating US election law, told Ukrainian President Volodymyr Zelensky's predecessor Petro Poroshenko that he could get a state visit to Washington in exchange for the investigations Trump later pushed on Zelensky.

Trump and Giuliani keep in touch

Even though some Republicans are circling the wagons around Trump and trying insulate him from the rising questions surrounding Giuliani, Trump keeps his lawyer on retainer. The two keep up on the phone, CNN's Pamela Brown and Michael Warren report.

The last known face-to-face meeting Trump had with Giuliani was on October 12, when they met for lunch at Trump's golf course in Virginia. One person close to the White House said their discussion was friendly and focused primarily on politics.

Also at the center of everything: Mick Mulvaney

CNN's Phil Mattingly has been poring over the testimony released Friday from Hill and Alexander Vindman. Hill is the former top Russia adviser on the National Security Council and Vindman is the Ukraine expert on the council.

Phil's analysis below is the most important thing you'll read today:

No lines to Trump?

Republicans have repeated to us over and over that there is no direct line to Trump tying the frozen aid to the push for investigations. Assertions. Assumptions. Connecting the dots, but no direct line.

This is where the depositions of Hill and Vindman begin to shift our understanding of things.

At the July 10 meeting with top Ukrainian officials that went sideways, both Hill and Vindman recount nearly verbatim, Sondland informed the group that he had reached an agreement with Mulvaney about the necessity for Zelensky to move forward on investigations before any White House meeting could be arranged.

Hill (pg. 69): "Ambassador Sondland, in front of the Ukrainians, as I came in, was talking about how he had an agreement with Chief of Staff Mulvaney for a meeting with the Ukrainians if they were going to go forward with investigations."

Q: Do you understand how he came to believe this deliverable was necessary?

Vindman: I heard him say that this had been coordinated with the White House Chief of Staff Mr. Mick Mulvaney.

Throughout Hill's testimony she recounts Sondland's close relationship with Mulvaney, which he both touted and often utilized outside of traditional channels used by an ambassador (Vindman hits on this point as well.)

Add to that: Several witnesses have testified that while they were never given an explanation for why security assistance to the Ukraine was held, they were told by an unnamed White House Office of Management and Budget official that it had come at the direction of Mulvaney, who was operating at the direction of Trump. Hill also backs this up, saying that while she never learned the President personally put a hold on the aid, "I learned that OMB and Mick Mulvaney had put a freeze on."

To be clear: The "deliverable" in exchange for a meeting at the White House, and the suspension of US security assistance are two separate things, at two separate points in the timeline. But Mulvaney's central role in both underscores the very clear role the President's acting chief of staff played at the center of quite literally everything. Does that directly implicate the President? No. But the idea Mulvaney was operating as rogue on this, given the President's very clear and stated concerns about Ukraine, is difficult to square.

My add: There is an obvious line to Trump

My add-on to Phil's point is that whenever someone says to you there is no direct line to the President, you should point out the transcript of the phone call is a pretty direct line.

Plus, remember when Mulvaney admitted Trump withheld the money for an investigation and then argued there's nothing wrong with it because that's how US foreign policy works? You either see it in there or you're trying not to.

What else we learned from Hill and Vindman

Our reading team found these nuggets in the transcripts.

In one of those freewheeling news conferences conducted in shouts in front of Marine One, Trump said he'd love to have Mulvaney testify but he doesn't want to give the impeachment inquiry credibility. He said Republicans are kicking Democrats' asses and says he hardly knows Sondland.

He also said he may go to a military parade that President Vladimir Putin invited him to attend in Russia. But the 2020 election may get in the way.

Just throwing this out there: Trump and Republicans don't want to cooperate with the impeachment inquiry, but by completely sitting sympathetic White House officials out, they're basically ensuring that Americans will hear at public hearings next week only from people like Hill, Vindman, top US diplomat in Ukraine Bill Taylor and others who were concerned about Trump and Ukraine.

We may get to see only the prosecution, in other words, and not Trump's defense.

Mick Mulvaney has been "acting" chief of staff for nearly a year, which means he hasn't been given the official title because Trump doesn't want to give it to him. But Mulvaney will clearly stay in his place.

Trump disrespected Rudy Giuliani by failing to find space for him in the Cabinet. Now the man once known as America's mayor will more likely be remembered as Trump's top defender -- and an overseas opportunist trying to make some money.

Jeff Sessions, Trump's first attorney general, was dismissed in disgrace from the President's inner circle because he failed to protect his boss from the Russia probe. Hoping to get his old job in the Senate back, Sessions recorded a fawning video -- it's been described as a hostage tape -- trying to get Trump's blessing for what should be an easy win.

Who knows what's happened to Lindsey Graham, who used to be so attached to John McCain and now seems exclusively for Trump.

If I had to guess about Graham, I'd look at the fact that he's up for reelection in South Carolina this year, but his boosterism goes beyond that. He clearly doesn't care what folks in the media or in Washington think about him. The charitable assessment is that Graham thinks he can help influence Trump if he stays close to Trump. And the only way he can do that is by praising Trump's dominance and staying inside so that he can pick his moments -- Syria -- to rebel.

The point I'm trying to make here is that no one enters Trump's orbit, where absolute loyalty and public subservience are required, and emerges with an improved reputation or increased respect.

Anonymous (and a stick of dynamite)

Read this quote from the New York Times review of the new book by Anonymous, who explains why he or she has gone from arguing in an op-ed a while back that the bureaucracy could modulate and control Trump to now arguing Trump should be defeated in November:

Attempts by the "adults in the room" to impose some discipline on a frenzied (or nonexistent) decision-making process in the White House were "just a wet Band-Aid that wouldn't hold together a gaping wound," Anonymous writes. The members of the "Steady State" (the term "Deep State" clearly stings) have done everything they can, to no avail. Anonymous is passing the baton to "voters and their elected representatives" — only now the baton is a flaming stick of dynamite.

What are we doing here?

The President has invited foreign powers to interfere in the US presidential election.

Democrats want to impeach him for it.

It is a crossroads for the American system of government as the President tries to change what's acceptable for US politicians. This newsletter will focus on this consequential moment in US history.

Keep track of documents and hearings with CNN's Impeachment Tracker. See a timeline of events. And get your full refresher on who's who in this drama.