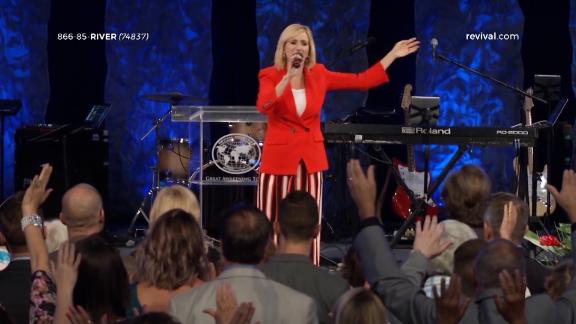 It was "Power Night" at the City of Destiny church on Sunday and Pastor Paula White was urging her congregation to pony up.

"I want you to hear from God. God already spoke to me what I'm going to write out. You're going to write your checks to Paula White Ministries," White preached. "If God tells you to give $12.99, do it. Whatever the Holy Spirit speaks to you. If you need to give by credit card, do so."

White regularly urges those in her pews to donate to her ministry, promising that God will bless them with wealth and "visions" in return. She sometimes warns her followers that their "dream will die" if they don't.

This time, the televangelist was doing it as a newly minted White House official.

White, President Donald Trump's longtime spiritual adviser, joined the White House staff last week to lead the Faith and Opportunity Initiative, a division of the Office of Public Liaison. Her role will primarily be to solicit input from religious groups on White House initiatives and to maintain Trump's strong ties to the religious leaders who support him.

Topping that list are evangelicals, a key voting bloc whose support helped Trump win in 2016 and who will be critical to his reelection prospects in 2020.

White is a controversial pick for that position. She and the "prosperity gospel" she preaches have been panned as heretical by many evangelical and orthodox Christians.

"When I first started studying (the prosperity gospel), it was considered this sort of late-night TV preacher with greasy hair, ripping off a widow in Florida kind of reputation," said Kate Bowler, a history professor at Duke Divinity School and the author of "Blessed: A History of the American Prosperity Gospel."

"I think most evangelicals would find it pretty embarrassing that someone who had such a heavy super naturalist show-and-tell kind of theology would not just become someone invited into the White House, but would sort of be the arch, like super evangelical that would show them all that there was a way into the Oval Office," Bowler added. "I'm sure they are grinding their teeth about it."

White House deputy press secretary Judd Deere called White "someone who has the respect and admiration of the faith community across the country."

"No President has done more for the faith-based community in the United States than Donald J. Trump, including safeguarding religious freedom at home and promoting it abroad," Deere said. "The President has called her a religious leader and is grateful for her prayers and counsel."

White's appointment also raised ethical questions. Her hire came just as she was promoting her latest book and in recent interviews about her new White House position, White has also plugged her book and its references to her relationship with Trump.

Deere said White was hired as a part-time special government employee and is "permitted to maintain separate employment as well as her part-time government job."

White first met Trump nearly two decades ago, when he caught one of her sermons on TV during a stay at his Mar-a-Lago resort in Palm Beach, Florida, and called her.

"You got the it factor," Trump told her, according to White's numerous recountings of the call.

The two met when White was in New York and grew close in subsequent years, with Trump inviting her to the set of NBC's "The Apprentice" and White inviting him onto her show. White even purchased a condominium in one of Trump's New York apartment buildings.

White has come to refer to her relationship with Trump as an assignment from God.

"To say no to President Trump would be saying no to God," White said during a recent live-streamed book signing.

But unlike spiritual advisers to past presidents, White doesn't just see herself as a quiet counselor. She hasn't shied away from politics, joining Trump at campaign rallies and defending him from the Russia investigation and talk of impeachment on cable news.

Bowler believes Trump and White clicked over the reciprocal nature of the theology she preaches.

"He thinks, 'wow your theology actually sounds a lot like mine.' 'The Art of the Deal' and Paula White's books like 'Deal With It!' are not really that far apart," Bowler said.

As Trump began preparing for his 2016 presidential run, he consulted her and turned to her to rally evangelicals around his campaign. She delivered in the early months of his campaign, bringing an assortment of out-of-the-mainstream pastors who lent a veneer of evangelical support to Trump's campaign.

When he was elected, Trump gave her a prime speaking slot at his inauguration, where she delivered the invocation.

Despite a reputation as a philanderer and allegations of sexual assault (which he has denied), Trump ultimately rallied the Christian right to his campaign with hardline rhetoric on social issues like abortion and promises to appoint conservative justices to the Supreme Court. Most rallied to his cause after he secured the 2016 Republican nomination.

Many prominent conservative evangelicals have remained stalwart Trump supporters even as he faces political headwinds, touting his work to nominate and confirm conservative judges to the federal bench, including two Supreme Court justices. And those with reservations have largely kept those private.

Erick Erickson, an evangelical conservative political commentator who has sometimes criticized Trump, said even some of the President's supporters were concerned by his decision to appoint White to a position in his administration. And Erickson said the hire could hurt Trump's efforts to expand his appeal among skeptical evangelicals.

"There are lots of evangelicals who have been skeptical of him all along. And seeing a prosperity gospel minister most of these people look at as a heretic in charge of faith-based outreach ... sends a signal that maybe he's not taking it as seriously as some people think," Erickson said. "Even some of the evangelical movement leaders who are standing shoulder to shoulder with her privately recognize that she is not of the orthodox Christianity and the faith they proclaim in the pulpit on Sundays."

"But right now, she's a means to an end with the President and they're focusing on their power through him," he added.