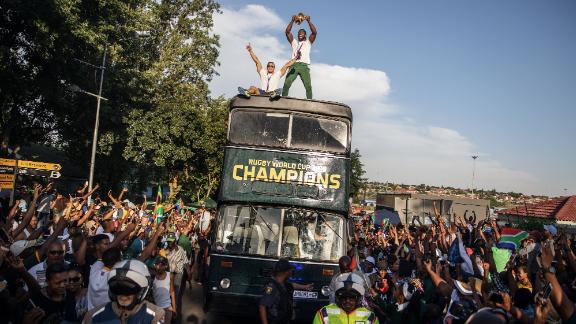 CNN's David McKenzie explains the significance of South Africa's Rugby World Cup win as the team travels round the country with the trophy.

Fezakele Kolisi was once forced to carry an identity document wherever he went in his own country. During apartheid, black citizens of South Africa were required to carry pass books when traveling outside of their designated homeland or township.

What must he be making of the scenes that developed in front of him today?

Starting in Pretoria on Thursday morning, the bus crawled south to Johannesburg before heading towards Soweto, the largest of South Africa's townships — a term referring to the largely underdeveloped urban sprawls that were established as a result of apartheid's racial segregation.

"We are a strong diverse country," Kolisi told a crowd in Soweto. "Our team is diverse. It is something we use. We had one goal and that was to win this trophy.

"We are so grateful to see these beautiful scenes, to see these little kids run around. We hope that this is going help pull the country together and fight together as one to make this country amazing again."

The Springboks' last few weeks in Japan represent a remarkable story that offers a microcosm of South Africa's transformation since 1994.

Just over 25 years ago Nelson Mandela became the first black president of the country following its first democratic elections.

Part of his unification mission was built around the Springbok emblem — a symbol of oppression for the black majority under the previous regime. At the 1995 World Cup Mandela famously donned the green and gold and personally handed over the trophy to captain Francois Pienaar.

Six years after Mandela's death, state corruption, rising unemployment, spates of xenophobic attacks and alarming rape and murder statistics have tarnished the Rainbow Nation narrative that shone so brightly in the early years of democracy.

Victory in a rugby tournament will not flick the switch on a country that is now the most unequal in the world according to the World Bank. The homeless will still be without homes. The hungry will still wonder where a next meal will come from.

But the image of Kolisi standing at the summit of the rugby world as South Africa's first black captain shows, in some part, that the dream of racial cohesion is still alive.