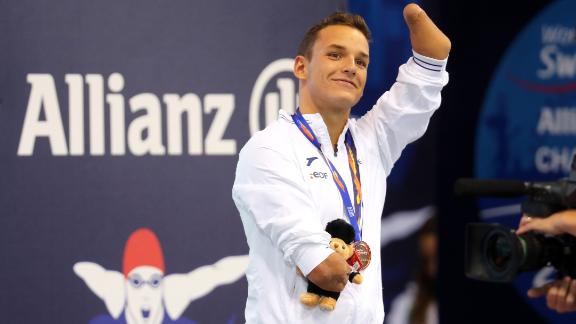 Théo Curin has been on a mission to change the way people look at disability. Now a world class swimmer, the teenager is looking to expand his portfolio.

Théo Curin is no ordinary teenager.

At the age of six, he contracted meningococcal meningitis, a rare bacterial disease that can sometimes lead to clotting in the blood, causing tissue to die. To save his life, doctors had to amputate the ends of his limbs. Because he was so young when the procedure happened, he feels no ghost pains.

Since then, his disability has not stood in his way. He is a swimmer representing France at the highest level. At the 2016 Paralympic Games in Rio, he was the youngest member of the French delegation.

Walking steadily into CNN's Paris bureau on prosthetic legs that connect just below his knees, Curin recalled the thought that struck him when he first touched down in Brazil: "This is dope! To be at the Olympic games as a 16-year-old is to live something extraordinary."

But Curin had not always been into sport -- and even less so swimming. Even before his illness, Curin had a phobia of water. "I hated it. When there were school trips to the pool, I would not go because I was scared," he said, visibly amused by the irony.

All of this changed when he met French para-athlete, Philippe Croizon. Also missing four limbs through amputation, Croizon is famous for swimming across the English Channel in 2010. Aged seven at the time, the meeting left Curin with a burning desire to prove he could do anything.

Encouraged to try swimming by Croizon, who is now a friend of the family, Curin quickly began to appreciate the sport. "When I am in the water, I have the impression that my disability has disappeared. I have no prosthetics, no wheelchair. I am like everybody else," he said.

Showing signs of talent, Curin eventually moved away from home to train at an academy in Vichy, close to the center of France. This meant moving 500 km away from his family in Nancy to live in shared accommodation with other young athletes.

Curin says living away from his family was "complicated."

"I was a bit sad at the start but got used to it. I wanted to be a champion and knew I would need to go through difficulties to get there," he said.

He has recently returned to France from the World Para Swimming Championships in London, where he claimed a bronze medal. His immediate focus now is on qualifying for the 2020 Paralympics in Tokyo.

But he also has an objective far greater: "To change the way we see disability."

Visibility is central to his mission. "I think there is a really strong message sent when you see someone who has a relatively heavy disability such as mine, who puts themselves forward for shoots, for photos, for videos," said Curin.

"In France, we are too far from other countries from accepting differences."

READ: He doesn't have legs and spent years on the streets. Now he is running one of the world's hardest races

He acts, on-and-off, in a television a comedy series called "Vestiaires" [Locker Rooms], broadcast on France 2. The program centers on the lives of disabled swimmers who share their derisive vision of the world each week at training.

In it, Théo plays the eponymous role of 'Théo'. The character is arrogant, full of angst and constantly trying to get under the skin of the rest of the cast -- many of whom are also para swimmers in real life.

"It is a thing that I love because it is not very serious and is also an opportunity to play someone who is not necessarily myself," said Curin.

"In any case, it is not at all my personality normally." Given the chance Curin would like to act in films, describing this as a "second dream".

For now though, he is far too busy. This year, Curin started work as a commentator on a show called "Magazine de la santé" [Health Magazine]. He won the job having charmed the directors during an initial invite as a guest.

On the show, Curin discusses the power of sport to overcome life's challenges. In his most recent appearance, he discussed how former French rugby star, Christophe Dominici, turned to the game as an emotional outlet after the sudden death of his older sister.

During our interview, Théo's confidence and authority are a clear sign that he has done television work before. He speaks with a confident tone, in full sentences, rephrasing the wording of each question into his answer so as to give a response that can be cut nicely for an edit.

Théo's most recent endeavor is modeling. In September, he signed a deal with men's cosmetics brand, Biotherm, in September.

It is the first center fold in France that a quadruple-amputee has featured at the center of a cosmetics marketing campaign, which features a slickly produced video, posted by Théo for his 71,000 Instagram followers to see. David Beckham is another figurehead for the company.

Neither Théo nor his agent were able to disclose how much money he makes from these activities.

For now, Curin still lives in Vichy, sharing accommodation with two other para athletes training at the academy. On top of all of his other activities, he is also studying to pass high school exams. Special provisions have been made to allow him to complete the studies over two years rather than one. Nonetheless, his agenda is crammed.

"It can be a bit difficult to manage all of these different projects, but I am lucky to have a whole team around me who organize my timetable," he said. Among those supporting Curin are his family, who he said have "really come together as a force."

He describes his life as "hyper-autonomous" and does not have a permanent carer. Curin has not used a wheelchair for three years and said he does not experience any discomfort from the disability.

At the end of the interview, which took place on a balcony overlooking a chilly Avenue Champs-Elysées, he takes a sip from a cup of tea, clasped between his forearm and bicep, to warm up.

He said that people with amputations do not feel the cold as much, before jokingly suggesting with a generic advertisement voiceover tone: "Get four limbs amputated and you will not feel the cold anymore. Get 50% off with the code THEOCURIN."

Over coming months, Curin will slowly ease back into training, so as not to peak too soon before next year's Tokyo Olympics. Once he has returned to full flow, he will swim four hours a day, five days a week, often then racing in competitions at the weekend. "It is exhausting," he said.

After a big competition, he says it is important to treat yourself. He makes effort to spend time with his friends, his girlfriend and to call his family over the phone. "Sure, I go out less to night clubs than most people my age, but it happens." He even enjoys a drink and junk food, "in moderation".

Curin hopes to one day become the World Champion in 100m and 200m freestyle events -- a tough task given that some competitors in his category have hands or feet and so, are considerably less disabled.

But he remains optimistic. "Disability is not a barrier or obstacle in life," he said.

"I hope to inspire all kinds of young people to do sport and why not also to overcome disability?"