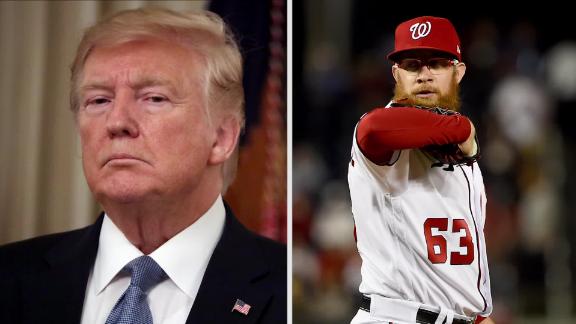 Nationals pitcher Sean Doolittle told the Washington Post he will not join his teammates when they visit the White House commemorating their World Series win. CNN's Coy Wire has the details.

"There's a lot of things, policies that I disagree with, but at the end of the day, it has more to do with the divisive rhetoric and the enabling of conspiracy theories and widening the divide in this country," Doolittle said in an interview Friday with The Washington Post.

The relief pitcher told the newspaper that he didn't want to be a distraction for his teammates who want the experience of meeting the President.

"People say you should go because it's about respecting the office of the president," Doolittle told the Post. "And I think over the course of his time in office (Trump's) done a lot of things that maybe don't respect the office."

Doolittle told the Post that he feels "very strongly" about Trump's "issues on race relations," mentioning the Central Park Five, the Fair Housing Act and Trump's comments in the wake of a 2017 white nationalist rally in Charlottesville, Virginia.

Doolittle, who spoke out at the time condemning the Charlottesville rally, told the Post that Trump's rhetoric has enabled and empowered racism and white supremacy.

"I don't want to hang out with somebody who talks like that," he said.

Doolittle also told the newspaper that his wife has two mothers involved in the LGBTQ community, and he didn't "want to turn my back on them."

"I have a brother-in-law who has autism, and (Trump) is a guy that mocked a disabled reporter. How would I explain that to him that I hung out with somebody who mocked the way that he talked, or the way that he moves his hands? I can't get past that stuff," Doolittle said to the Post, referring to Trump's 2015 attack against a New York Times reporter who has a physical disability.

CNN has reached out to the Washington Nationals for comment. The Nationals beat the Houston Astros in Game 7 on Wednesday, earning the franchise's first World Series title.