How a Trump impeachment could lead to a Pelosi presidency 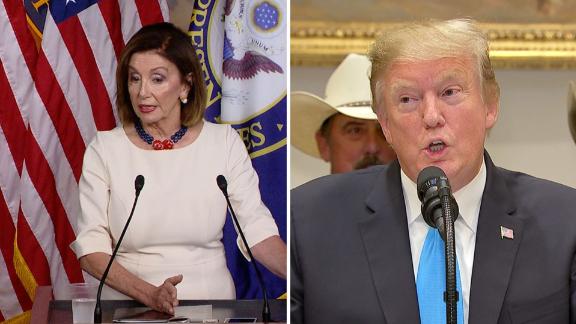 Nancy Pelosi and Donald Trump sounded cautiously optimistic in early 2019 but the Speaker of the House has now become Trump's most prominent opponent.

House Democrats will press forward on Thursday with a House vote to officially greenlight impeachment proceedings into President Donald Trump's handling of aid to Ukraine while he was seeking an investigation of his political rival, Joe Biden.

In defending his actions, Trump has suggested that reporters should look into Vice President Mike Pence's conversations with the Ukrainian president. And the White House has been evaluating whether to release notes of Pence's talks with President Volodymyr Zelensky.

All of these developments raise the question of whether Pence could be drawn into the impeachment maelstrom.

Should Democratic efforts to remove Trump from office succeed, Pence would succeed to the presidency -- under normal circumstances.

Both history and constitutional law, however, suggest that other successors to the office are possible. It all depends on the magnitude and nature of the "bribery" or other "high crimes and misdemeanors" that may or may not be established by congressional investigators.

More importantly, presidential succession, in this case, depends on (to paraphrase former Sen. Howard Baker in reference to the Watergate Investigation) what the Vice President knew and when he knew it. Specifically, was the vice president aware during his September 1 conference with Zelensky in Poland, that Trump had previously asked for a "favor" when discussing military aid and that the favor included a Ukrainian criminal probe of Joe and Hunter Biden. The political futures of Mike Pence and Nancy Pelosi may well depend upon the answers to these questions.

If Pence's September trip was intentionally designed to reinforce Trump's demand for a "favor" with an intimidating follow-up message from the vice president, Pence may have a serious problem.

It could put him right in the thick of the impeachment soup as a co-conspirator with the president.

What might follow could be a double impeachment scenario that would make heads spin and House Speaker Nancy Pelosi the president of the United States. After Pence, she's next in the line of succession.

Pence has already admitted that he visited President Zelensky and raised concerns about corruption in Ukraine in the weeks after President Trump's controversial and alleged "quid pro quo" discussion with the newly elected Ukrainian leader. One of Pence's aides was on the call with the Ukrainian President. The specifics of that conversation have yet to be made public but will ultimately reveal whether Pence was actively involved in an attempt to improperly pressure the vulnerable Ukrainian leader.

Some sources cited by CNN reporting claim that the Vice President's version of his conversation with the Zelensky is that it wasn't about Biden, but about corruption generally in Ukraine. Pence brought Trump assurances from Zelensky that the Ukrainian leader would take action against corruption. In this account, Pence then made the case to Trump that the United States should lift its hold on aid to Ukraine, which is what happened.

If Trump and Pence were both implicated in the scandal and Pence's resignation or removal from office occurred first, Trump could nominate a new vice president under the 25th Amendment.

A Speaker's assumption of the presidency came perilously close to happening once before, when the Watergate scandal brought an end to the Nixon Administration in 1974.

At first, Agnew contested the charges, even asserting the defense that a sitting vice president is immune from indictment. That defense -- which sounds suspiciously like the claim asserted by Trump lawyers before the federal Second Circuit Court of Appeals earlier this month that even if the President shot someone on Fifth Avenue, he would be immune from criminal prosecution -- was quickly abandoned by Agnew.

In a negotiated deal in October of 1973, Agnew pled nolo contendere to a single felony count of income tax evasion and resigned from office. He received a slap-on-the-wrist sentence of probation and a fine.

While both Agnew and Nixon were under the cloud of possible criminal indictment and impeachment, Speaker of the House Carl Albert, a Democrat, asked former John F. Kennedy speech writer Ted Sorensen to prepare a "contingency plan" outlining the circumstances under which Albert would have to assume the presidency under the 25th Amendment.

Sorensen's memo explained that had the vice presidency remained vacant at the time of a Nixon removal from office, Albert would have become president under the 25th Amendment.

The appointment was swiftly approved by a majority vote of both houses of Congress two months later. Perhaps it's time for Pelosi to brush the dust-off Ted Sorensen's contingency plan memo. You never know what the future may bring in DC these days.

A Texas demolition company accidentally tore down the wrong house