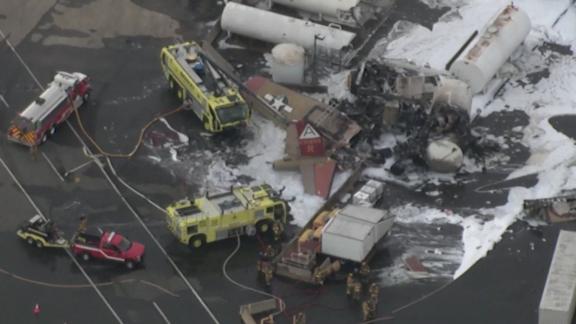 Seven people are dead after a World War II-era B-17 bomber crashed into a de-icing facility at Bradley International Airport in Connecticut, officials said.

The first testimony in the impeachment inquiry kicks off today when Kurt Volker, the former US special envoy to Ukraine, appears before a trio of congressional committees. Volker is a longtime GOP foreign policy expert, but he's viewed by the White House as not being a strong supporter of President Trump. Volker's testimony on what he knows about Trump's effort to pressure Ukraine to investigate his 2020 political rivals could be damaging to the President and his allies, analysts say. Trump is still waging a verbal war on the impeachment effort, lashing out at, well, just about everybody during a wild news conference with the President of Finland. The chances of Trump being removed from office remain low, CNN's Stephen Collinson says, but the President seems powerless to save himself from the historical scar of impeachment.

At least eight people have died and more than 300 have been injured this week as protests have raged in cities across Iraq. The mass protests have been against high unemployment, government corruption and the lack of basic services in the country. Government officials reacted by imposing curfews and blocking the internet in much of the country. Hundreds of protesters stormed governors' offices yesterday in two Iraqi cities, setting fire to parts of the buildings. Iraq's defense minister has put the country's armed forces on high alert and deployed extra troops to Baghdad's airport.

Seven people were killed when a World War II-era B-17 bomber crashed at an airport in Connecticut. The bomber slammed into a de-icing facility while trying to land. The plane had just taken off when the pilot told air traffic control it needed to return to the airport. Six people on the plane survived the crash. The B-17 belonged to a nonprofit group that restores aircraft. B-17s are known as the "Flying Fortresses" that helped the Allies win World War II.

Deal or no deal, the UK is leaving the European Union at the end of this month. That's what UK Prime Minister Boris Johnson said yesterday during a speech, as his new Brexit proposal was given to the EU. The most noteworthy part of his proposal involves the Irish border, which has been one of the big sticking points in the negotiations. The 1998 Good Friday Agreement (or Belfast Agreement) -- which helped bring an end to decades of conflict -- explicitly prohibits any physical checks at the border between Northern Ireland, which remains part of the UK, and the Republic of Ireland, an EU member. Under Johnson's new proposal, there would be a few, limited border checks, something the EU has indicated it won't go for. If the two sides can't come to an agreement on this by October 31, the UK will crash out of the EU without a deal, which many fear will lead to financial disaster.

The trade war might expand from Asia to Europe. The US plans to impose tariffs on $7.5 billion worth of European exports by the middle of this month. The World Trade Organization gave the US the OK to hit goods from European Union nations because the bloc had failed to comply with an earlier ruling regarding government subsidies for Airbus. If the tariffs are imposed, Europe is expected to retaliate. Meanwhile, Wall Street had another rough day, with the Dow falling nearly 500 points, just a day after it slipped almost 350 points. Investors seem worried that employment data is starting to look less rosy. The September jobs report comes out tomorrow.

"I don't know if this is possible, but can I give her a hug, please?"

Brandt Jean, brother of murder victim Botham Jean, to the judge presiding over the sentencing of Amber Guyger. The jury had just sentenced Guyger, a former Dallas police officer, to 10 years in prison for killing Jean. Brandt Jean, who stepped down from the witness stand and hugged Guyger tightly, said he didn't want her to go to prison and that he forgave her.

Forget about the Great Red Spot. What's that giant black hole that NASA discovered on Jupiter?

Heartbreaking pictures of emaciated grizzly bears are coming out of Canada, and people are blaming the climate crisis and the depletion of wild salmon.

Remember that giant floating device that was supposed to help suck up plastic floating in the Pacific? Its creator says it's finally working.

The new "West Side Story" finished production a couple days ago, and Steven Spielberg shared some sneak pics from the set.

It's hard to do a downward dog when your pit bull pup wants some attention. (Click to view.)